This post shows images from a Sunday morning visit to Marievale, a few kilometres north of Nigel. We arrived at Marievale at about 6h45. It is winter in SA at the moment and the Highveld winter mornings can be icey, and around Nigel and Marievale they can also be very misty. The first image was taken around 7h15 to give you an idea of how thick the mist was and how moody it made the atmostphere. Surprisingly, there was alot of bird activity despite the icey cold conditions.

The thick mist really filtered and diffused the light. We drove past an open grassland in the almost sepia colour light . The heavy dew and icicles weighed down the grass. The morning light just caught the icicles and cold dew drops making a beautiful lacy abstract.

It must have been around 8h30 when we came across five Greater Flamingoes feeding in a patch of water close to the road. The mist was still thick allowing a moody shot of them.

We visited all of our favourite little spots. On our way past Kingfisher hide we came across hundreds of coots congregating on mass for some reason. It was an unusual to see such a large group.

The mist was so thick it was difficult to get clarity but what was lost in definition was made up for in mood.

I am always intrigued by those long necks of the Flamingoes which help them find food in different depths of water and enable them to move their heads from side to side to facilitate their sieve feeding method. The flamingo stamps its webbed feet to stir up all sorts of food from the lake’s muddy bottom. It then sweeps its bill upside down through the water, filtering out food with its bristly tongue and special hair-like structures in its bill which act as a sieve or filter.The Greater Flamingo’s bill is shallow-keeled with a coarse filter to be able to strain out small invertebrates. The pinker Lesser Flamingo has a deeper-keeled bill with a fine filter to sieve out algae. 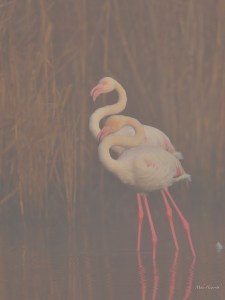 Flamingoes are normally very gregarious which made this lone group of five quite unusual. After about half an hour of watching them, this family group flew off probably to join another flock.

This image of a Black-headed Heron on the road in Marievale shows how thick the mist still was at 9h00 in the morning.

With the window open for my camera support, it was very fresh. Needless to say a supportive partner with a hot cup of coffee and a hot-cross bun was very welcome at this point.

There are many Stonechats at Marievale. This male was wet and cold but had a perfect photographic perch. He was all puffed up, ready to defend his territory and seemed to be coping with the cold.

The water was frigid but the birds trawled in the water regardless. Outwardly they seemed to be able to handle the cold just fine. One of the advantages of an early winter morning is that the atmostphere is usually very still, so the water surface is like a mirror. This just another one of those natural variations which makes such unexpected and interesting photographic opportunities. This young Black-winged Stilt was just such an opportunity. 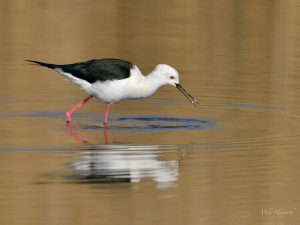 This little Cape Wagtail also seemed to be almost oblivious to the cold water chirping away as it foraged along the water’s edge.

Hottentot Teal are one of the most beautiful duck in Southern Africa. We are fortunate to have numerous duck species all of which are so colourful. This pair of Hottentot Teal were mating. In his fervour, this male did seem to be half drowning his mate.

Shortly after they parted, the female washed herself – remember the water must have been icey cold. The colours of the female and the surrounding water matched perfectly.

After a bath and just before take-off this female Hottentot Teal flapped her wings  to remove the excess water and then proceeded to jet out of the water. They seem to jump and flap at the same time getting airborne very quickly.

This noisy little Three-banded Plover was right in front of us begging to be photographed – so I did.

I had heard that the African Snipe could  bend the lower and upper mandibles of its beak but had never seen it before. This African Snipe bent its top mandible upwards. By sequentially opening and closing their mandibles they are able to manoeuvre their food up their bill and into their mouth without opening the full length of the bill.

This particular African Snipe was resting in thick grass along the water’s edge. Until it moved to ruffle its feathers, we did not see it despite being right in front of us. The camoflauge is incredible.

As you can see the mist had cleared by now and it had turned into a stunning clear blue sky day on the Highveld. An extensive fire had burned through the grasslands and some of the reed beds in Marievale. We found many  Cape Longclaws rumaging through the burnt grass stalks for insects. 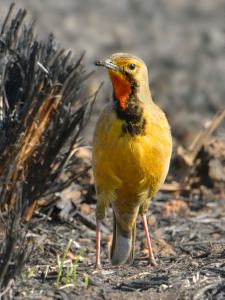 Another bird which seemed to be successfully feeding in the burnt grass areas in Marievale was this little Levaillants Cisticola.

When we were driving thought the thick misty toward Marievale, the thought crossed our minds that might turn into magnificently unsuccessful photographic morning. Quite the opposite happened. It was a  fascinating morning with many photographic opportunities which I did not expect. We got greater insight into a number of bird species and yet another reminder by mother nature that when we take the time to fit in with her rhythm then much will be revealed.

“I would feel more optimistic about a bright future for man if he spent less time proving that he can outwit Nature and more time tasting her sweetness and respecting her seniority.”
―     E.B. White,

I hope you found the Sunday morning trip around Marievale interesting.