This the fourth and last post from my recent trip to Etosha with CNP in late June 2013. This post shows images from our visit to Andoni Plain in the north-east section of Etosha. The Andoni Plain is immediately south of the  Nehale lya Mpingana Gate. A kilometre or so from the gate is the Andoni waterhole which was opened to the public in 2001.

Lou said this was the second time ever that he had seen a Giraffe on Andoni Plain. It did seem incongruent being a tree browser and there were no trees around for miles. The Giraffe’s size contrasted with the openness of the plains making an interesting, if lonely, image.

The next image is a panorama of the area around the Andoni waterhole. It was taken with the panorama function on my Samsung 3 Galaxy cellphone. It is mind-boggling to see the quality and functionality of  the cellphone cameras. The panorama gives a sense of how flat and open the Andoni Plain is.

It was interesting to see how patient the Zebra, Gemsbok and Wildebeeste were around the Andoni waterhole. All of these animals had a long walk across the plain to get to the waterhole. Each group waited until the group before them had drunk their fill

The Zebra clearly dominate the Wildebeeste and Gemsbok. The pecking order appeared to be Zebra, Gemsbok then Wildebeeste. Zebra were the populous species. 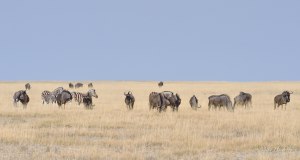 Once the Zebra had drunk their fill they seemed reinvigorated. Some individuals then started galloping around chasing each other. The next few images are of the Zebra mock fighting and trying to bite each other on the neck or legs. Most of the mock fighting seemed to be between stallions.  They also went for each other’s rump or legs. Attempting to prevent their legs being bitten they would twist and weave,  and got onto their knees to neck wrestle.

The next image was of one of those invigorated individuals encouraging his mates to play. We did not see any savage fights, mostly boisterous play.

It was very dry around the Andoni waterhole so all the Zebra activity kicked up a lot of dust. It was a fine white dust.

With so many animals milling around the waterhole it was difficult to get an action hot with a clean background. Zebra do provide many opportunities for wonderful action shots.

I thought it might be interesting to see where we stayed on our Etosha trip. We stayed at Mokati Lodge located immediately outside the Von Linquiste gate. The lodge was superb. Very spacious with beautiful gardens, comfortable rooms and excellent food and service. I would heartily recommend Mokati Lodge as a base from which to enter the park.

Just outside the reception area at Mokati Lodge was a bed of Red Hot Pokers, which attracted the Sunbirds and Wood-Hoopoes. On the first day, I had been chatting to Neal Cooper and he said he still wanted to get a decent image of a Scimitar-billed Wood-Hoopoe. I mentioned there might be a possibility with the Red-hot Pokers. Blow me down half an hour later ,when were getting ready to get onto the vehicles, there was this Scimitar-bill on the Red Hot Pokers. We all the shot.

This was only the second time I had seen a Scimitar- billed Wood-Hoopoe, the first time was at Ratelpan hide in the Kruger Park.

This Red-billed Hornbill was a friendly fellow coming over to greet us every lunchtime at Mokati Lodge. He would come and perch on the wooden railings next to our table. I really liked the translucence of his red bill illuminated by rear light.

In the gardens around Mokati Lodge there were a variety of birds, such as Cardinal Woodpeckers, Crimson-Breasted Shrikes, White-Crowned Shrikes, Black-backed Puffback Shrikes, Red-billed Hornbills, Fork-Tailed Drongos, White-bellied Sunbirds, Blue Waxbills and the ubiquitous Grey Louries. The next image was of one of the many White-crowned Shrikes around the lodge.

There was a very tame Crimson-Breasted Shrike around the lodge which came over to greet us every lunchtime.

The Crimson breast feathers are the most glorious colour. I suspect a painter would find it very difficult to match the luminance and tone. I am still waiting to get a shot of the yellow morph. I have seen one at White River Country Club in Mpumalanga in South Africa but I did not have my camera with me at the time. 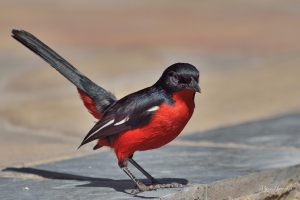 We had a wonderful six days in the east side of the Etosha National Park with Lou and Neal from Coetzer Nature Photography. Even though those five-star ratings were hard to come by, we were very privileged to be there. Those customised vehicles which Lou designed, massively enhance the ability and flexibility when shooting from a vehicle.

A big thank you again to Lou and Neal for an excellent week out in what is a unique bush and photographic environment.

“To photograph is to hold one’s breath, when all faculties converge to capture fleeting reality. It’s at that precise moment that mastering an image becomes a great physical and intellectual joy.”

I hope you enjoyed this trip around Andoni Plains – a unique photographic location.