This is the third post from my recent trip to Etosha with CNP. Besides the two main waterholes which we visited regularly, we also went to Two Palms and wandered around Fisher’s Pan.

Fisher’s Pan is an extension of the main Etosha Pan.

“Etosha – the “Great White Place” – is the ghost of a lake that died 12 million years ago. It is 130km wide and 50km across, and for most of the year it is as dead as Mars. When it rains, life returns to Etosha, and for a few brief weeks it becomes a lake again, a magical place of shimmering reflections alive with flamingoes, pelicans and wading birds.”

Although the last time the entire pan was flooded was in 1978, we were privileged to go to places like this which are etched by history. It will still offer its beauty long after we are gone to those who take the time to be quiet and listen to its story.

We were privy to its story for a short six days. My interpretation of its story is told through images.

The next image of one of CNP’s customized photographic vehicles parked on the road across Fisher’s Pan.These vehicles made all of these images possible.

We watched the two Springbok in the next image with great interest for about an hour one afternoon. Apart from an interesting vista, the main interest lay in two Cheetah which were watching these Springbok. The Cheetah waited until the light started to fade before beginning their stalk. Every time the Springbok looked up the Cheetahs crouched low in the grass. The last part of the Cheetahs’ approach was a gap of about 100 metres with no grass covering which the Cheetah’s would have had to cross removing the element of surprise. Long before the Cheetahs could initiate an attack the Springbok had seen them – hunt over!!

We found the two Cheetah close to Two Palms waterhole where they must have come to drink earlier.

The two Cheetah appeared to be an adult female and an adolescent cub. The grass along the side of Fisher’s Pan was blonde and relatively long, long enough to mostly hide a Cheetah. 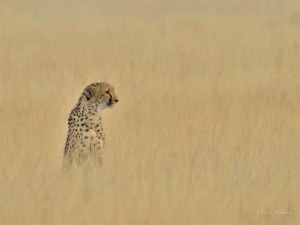 The colour of the grass was ideal for the Cheetah. As soon as it lowered its head you could not see it, even from the vehicle. From a distance it must be very difficult for likes of Springbok to see. This was ideal terrain for nature’s speedsters.

On the way to Two Palms waterhole we came across this Tawny Eagle reasonably close to the road. It was just surveying the scene and had a good visual across the pan.

After having found the two Cheetah’s at Fisher’s pan the one afternoon, we returned the next morning hoping to find them again and perhaps watch them hunt. Sadly, they had moved off and we did not see them again.

“Yet, like so much of wild Africa, in the first and last hours of daylight, Etosha softens to become a place of serene and unearthly beauty”.

It was a cool morning and on our travels we came across this Greater Kestrel. You can see it was puffed up because it quite cool. This character posed beautifully for us for about forty five minutes, then took off away from us – no shot!! 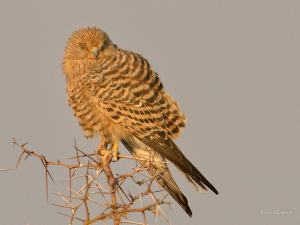 The same morning, we also came across  a pair of Hyaenas returning to their den from the pan.

The Hyaenas were just passing. There was no interaction for a special shot.

On the side of the road close to Fort Namutoni we saw this juvenile Pale Chanting Goshawk on top of a dead tree. 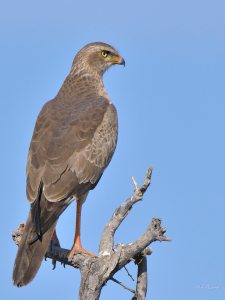 This Goshawk’s eyes were piercing. It was not long before it spotted something in the grass nearby and flew down to attack it.

There is a lot of game on the edge of the pan which makes waterholes like Two Palms and Okevi worthwhile visiting  – you might just get lucky. To remind you the park is huge – bigger than Switzerland -and the pan is surrounded with lots of mopane and acacia scrub, ideal for predators – avian and terrestrial!!

“Nature does nothing in vain when less will serve; for Nature is pleased with simplicity and affects not the pomp of superfluous causes.”
Sir Issac Newton
I hope you enjoyed the visual journey around Fisher’s Pan. I will post images of Andoni Plain next week.
Have fun
Mike

One thought on “Etosha – Fisher’s Pan”