I have added two new pages this week.

I will try to add to pages per week of new bird and animal species. This week I have introduced Coucals and Klipspringers. 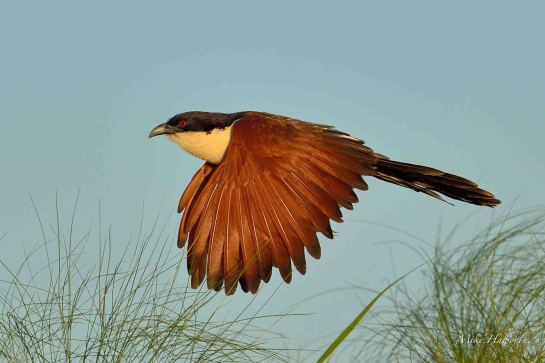 A Burchell’s Coucal in flight over the reed beds in the Chobe River. Stunning red eyes and beautiful ochre -coloured wings.

A White-browed Coucal seen in Borokalalo Game Reserve. This was unusually far south as they are more likely to be found along the Limpopo river or Northern Botswana. He was skulking down at the water’s edge for insects.

The Coucal’s call is so distinctive, a watery flute-like sound which would impress any sax player.

I have found Klipspringers all over South Africa and the shots I have shown were taken in Mashatu, Kruger Park and in a rocky kloof at Eagle’s Rock . They are incredibly agile on what looks to be permanent tip-toes.

This young Klipspringer was very comfortable sunning itself on this boulder at the base of a kopjie in Kruger Park.

This male was seen at Eagle’s Rock late one afternoon as a major summer thunderstorm was building.

I hope you enjoy these two new pages. I have also added some shots to the Kingfisher and Heron pages.