Last week I visited Mashatu Game Reserve for six days. Mashatu is a privately owned 29,000 hectare game reserve in a conservation wilderness area in south east Botswana known as the Northern Tuli Game Reserve. This game reserve has a uniquely diverse landscape with its wide open plains patterned with Shepard trees, stunted Mopanis and Mustard bushes, Croton groves, riverine forests with towering Mashatu trees, Leadwoods and Apple Leafs, rocky hills, marshland and majestic sandstone ridges. It has three main rivers flowing through it – the Majale, the Matabole and the Pitsani all of which flow into the Limpopo river. This reserve is located where the Rudyard Kipling’s “Great Green Greasy” Limpopo river meets the Shashe river. This is the confluence of three countries Botswana, Zimbabwe and South Africa.

“Late spring in southern Africa comes with mixed blessings.The predators have bounty but the land is parched and the herbivores survive on scant offerings.  In the dryness and dust of the parched earth lies millions of seeds pregnant with the next season’s abundance, just waiting for the first rains. The rain brings life. The rivers start to flow and the parched earth transforms into green grass and flowers and the landscape is renewed. Mashatu reveals the miracle of the seasons”. ~ Mike Haworth

In late October in this part of the world it is very hot – 30 degrees centigrade in the shade and over 40 in the sun and very dry as the parched landscape waits for the first rains of the summer season. The rivers are dry. The river courses are lined with Mashatu trees, Leadwoods and Apple Leafs and there are Croton groves on each side of sections of the Majale river. It is in these treed courses and groves that we find Africa’s secretive independent predator, the leopard. Mashatu is well known for its exceptional leopard sightings.

On our first morning out game viewing, our guide called Justice, who had particularly sharp eyes, saw this female leopard crouched on a sand bank under some Croton bushes close to the Majale river. She was perfectly camouflaged in the dappled light, so much so that a small group of impala were walking past her, about twenty metres away, and they had not seen her.

The impala moved off after seeing the vehicle but I do not think they saw their nemesis at all, such is the effectiveness of the leopard’s camouflage in the dappled light.

Once this leopard flattened herself  on the sandbank among the leaf litter she was incredibly well camouflaged. 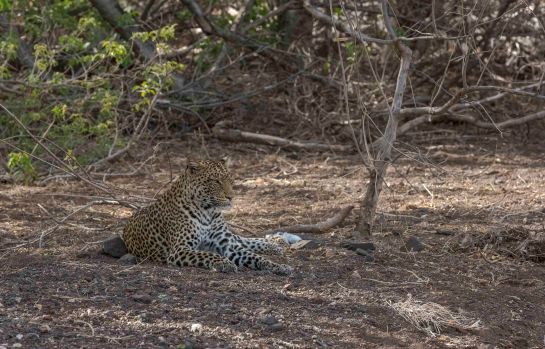 After watching this beautiful female leopard for about half an a hour and having scared off her prey she decided to rest where she was.

“I hope you have an experience that alters the course of your life because, after Africa, nothing has ever been the same”~ Suzanne Evans

There are numerous leopards along the Majale, Matabole and Limpopo rivers. This young leopard peered at us through a gap in his arboreal hideout.

“Humankind must begin to learn that the life of an animal is in no way less precious than our own.” ~ Paul Oxton

On our way back to camp one morning at around 9h30, we passed an extensive rock outcrop which is home to many Rock Hyraxes and rarely seen Black Eagles and leopards. To our surprise we had a young male leopard watching us making our way back to camp for brunch. It was only his white under belly that revealed his presence. As soon as we stopped he quickly slunk away into the rocks out of sight. 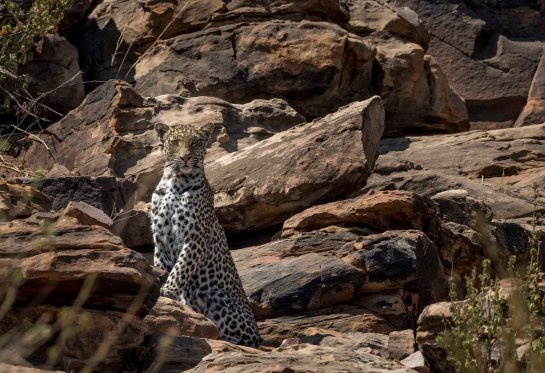 The next morning up at 4h30 and after a requisite cup of hot coffee and rusk we were on our way by 5h30 as the sun was rising. If you want to see the cats, the best time is in the early morning. Unless you are lucky, the leopards are up in the trees and lions have become “flat cats” two hours after sunrise. This was a young female lying on the ground at around 6h30. There were two large Mashatu trees in a Croton grove. A young male leopard had an impala kill stashed up one of the Mashatu trees and was guarding it. This young female was nearby but very wary of the young male who was from the same father but a different mother.

When a leopard lounges on the large branches of a tree it usually provides cameo photographic opportunities.

This was the young male up in the Mashatu tree carefully watching his kill and ensuring the young female did not steal a few mouthfuls. 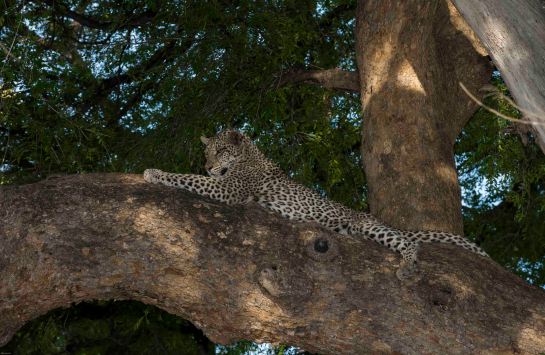 Young and relaxed but not prepared to share his kill. What was so unusual about this sighting was that there were two adult leopards in and around the same tree. It seemed that they had both recently been separated from their mothers.

The young female was taking in the scent from what looked like a midden of antelope droppings.

A playful young female leopard stalking and pouncing on a piece of wood close by.

Catching the scent and sight of prey, the play was forgotten and she went into full alert mode. She walked off in the direction of some impala she had seen and that was the last we saw of her that day.

We went back to see the two young leopards a few times. The last time we visited these two Mashatu trees we only found the young male up the tree. The guide said that the young female had come back to the two Mashatu trees but had been chased away by a troop of baboons which had passed through the area.

“I have great respect for leopards. They are powerful, independent, and skilled hunters. Being solitary they have no backup. They choose their fights carefully. You only see them when they want you to and it is then you see their striking beauty”~ Mike Haworth

On our last morning after watching two different families of cheetahs, we found this young male at the base of large Mashatu tree overlooking a patch of wild sage. It was a perfect place as it was cool and gave this leopard a good view of the passing parade in front of him and he had his back covered by the massive tree.

The young male leopard climbed up onto a large fallen branch of the Mashatu tree for a better view. As usual we found all the adult leopards alone as they are solitary by nature only coming together to mate or fight.

Ever alert, independent and ready to take advantage of an opportunity.

The young male leopard at the base of a large Mashatu tree.

This character was very relaxed and not fussed about us at all. He was much more interested in dosing and watching all the animal movement behind us.