This post is about three raiders who regularly rob the table at the Giant’s Castle. The latter is a nature reserve in the mountain range called the Drakensberg, colloquially named the Barrier of Spears, in the centre of South Africa.  The table is the place where we put out bones to feed the Bearded vultures.  The raiders are Jackal Buzzards, Cape Vultures and Black-backed jackals who know that food is regularly put out  in front of the bird hide.

“We were meant to explore this earth like children do, unhindered by fear, propelled by curiosity and a sense of discovery. Allow yourself to see the world through new eyes and know there are amazing adventures here for you.”  ~ Laurel Bleadon Maffei

We were fortunate enough to have a male Jackal Buzzard visit on one occasion.  In South Africa, we find six buzzards, the Jackal, Steppe, Forest, Long-legged, European honey and Lizard buzzard. The Jackal and Steppe buzzards are the only two found throughout South Africa. The others tend to be more regional. The Jackal buzzard is a resident while the Steppe buzzard is a migrant and had returned to Europe or Russia for the northern hemisphere summer.

“We only know a tiny proportion about the complexity of the natural world. Wherever you look, there are still things we don’t know about and don’t understand. […] There are always new things to find out if you go looking for them.”
~ David Attenborough

The adult South African Jackal buzzard has striking plumage. It is almost black or dark slate grey above, with a rufous tail and a patch on its breast of rusty-brown. The primary flight feathers are blackish and the secondaries off-white, barred with black. Below the chin and around the throat is mainly rusty-brown, and the rest of the underparts and the underwing coverts are rich rufous.

In flight, the Jackal buzzard’s underwing colouring is distinctive. The flight feathers from below are white, tipped with black to form a dark trailing edge to the wing. The tail feathers are a rufous colour.

Buzzards are a type of hawk, specifically, buteos which are medium to fairly large, wide-ranging raptors with a robust body and broad wings. Their broad wings are ideal for soaring on thermal currents. Unlike vultures, buzzards hunt for their meals and prefer to capture living prey, though they are not adverse to “raiding the giant’s table”, especially if other food sources are scarce.The Jackal buzzard is more of an escarpment than a lowveld bird. Although it soars high on thermals, most of its hunting is usually done from a perch. 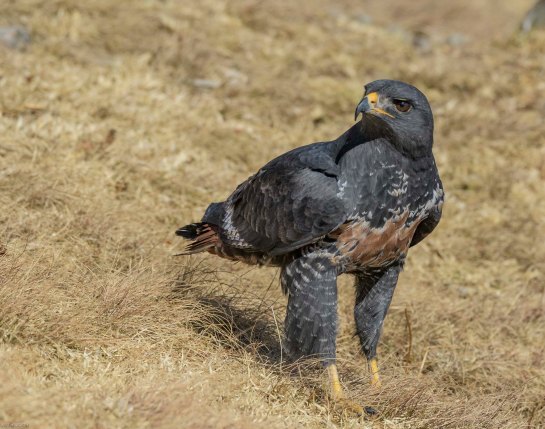 It is very vocal during its winter breeding period and frequently emits a high-pitched yelping cry similar to that of the Black-backed jackal, hence its name.

The Jackal buzzard has yellow unfeathered legs below the knee and a yellow beak with a black tip. Bird beaks are a textbook example of adaptations to feeding strategies, but there’s one major exception: birds of prey. Among eagles, hawks and falcons, the shapes of the skulls change in a predictable way as species increase or decrease in size. The shape of the beak is linked to the shape of the skull, and these birds can’t change one without changing the other.

The raider had found one of the bones put out for the Bearded vultures. From a photographic point of view, it was always interesting to see a Jackal buzzard fly in, giving you a chance to see this handsome raptor up close.

In Latin, the term ‘raptor’ means ‘plunderer’ (from the verb ‘rapere’ meaning ‘to seize’). The term is also descriptive of the powerful, grasping, talon-tipped feet found in all birds of prey, and is used as a name for the group of birds whose members have this common feature.

“We shall not cease from exploration, and the end of all our exploring will be to arrive where we started and know the place for the first time.” ~ T.S. Eliot “

When in the hide you can spend extended periods where little happens. That does not mean you can let your attention wander. Raiding visitors arrive very quietly and unannounced. If you are distracted or not paying attention you will miss the most import part of the action. It usually only takes a couple of seconds for the raptor to fly in and land. Those few arrival seconds are when any inter species action is likely to occur. 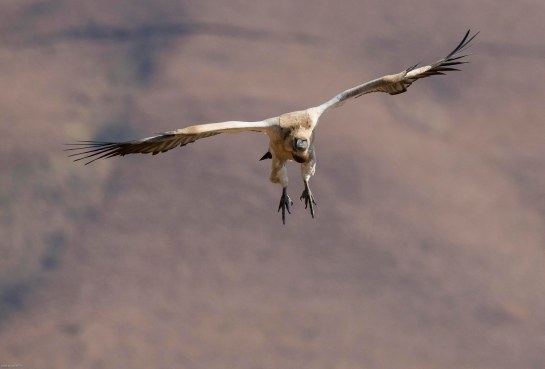 On two occasions a single Cape vulture come to visit and only landed once.

The Cape vulture is one of the largest southern African vultures with a total length of about 106 cm. It is the lightest of the vultures in colour being mostly whitish grey above, flecked with brown. The outer black primary feathers of the wing, the 12 tail feathers (in other species of this genus there are 14) and the inner dark brown secondary feathers contrast sharply with the lighter colour of the rest of the body, both above and below. The brownish crop section is surrounded by white down while the rest of the abdominal parts range from brown to cream becoming lighter on the wings. Source: Cape Nature. 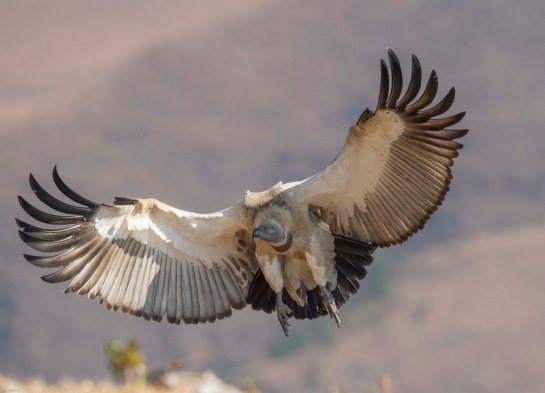 “Let those who wish have their respectability- I wanted freedom, freedom to indulge in whatever caprice struck my fancy, freedom to search in the farthermost corners of the earth for the beautiful, the joyous, and the romantic.” ~ Richard Halliburton

The blue grey head and neck are sparsely covered with white down. At the base of the neck there are a few rows of long feathers forming a grey- buff collar. The bare face is bluish grey, the eyes yellowish brown and the feet grey. Apart from a slight size difference (female larger) there is little difference between the sexes making it difficult to differentiate between males and females.

The Cape vulture is southern Africa’s only endemic vulture species, A few individuals have been recorded from Zambia. The Cape vulture is found in South Africa, Lesotho, Botswana, northern Namibia and southern Zimbabwe. The southern African population is listed at 2900 breeding pairs, of which approximately 1450 reside in the Maloti-Drakensberg mountains- about 20% of the population. Cape vultures live in colonies of up to 1000 breeding pairs, and despite large extended families they are loyal to one partner. Source: Maloti Drakensberg Vulture Project

The Cape vulture occurs near the mountains, in open grassland, arid savannas and steppes. The mountains provide them the thermal currents necessary for the flight of these heavy birds. This species is less common in wooded areas. They breed and roost on cliffs. 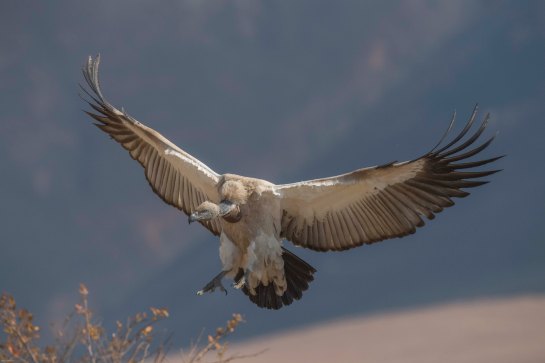 The Cape Vulture is a scavenger, feeding on carrion. Around the carcasses, it takes bone fragments, soft muscles and organ tissues.

The two blue skin patches on its breast are thought to be sensitive to temperature and pressure enabling the bird to read the strength of a thermal it is flying through.

When the Cape vulture extends its wings you get to see just how large this raptor is.

“Intelligence is the ability to adapt to change.” – Stephen Hawking

Apart from the raptor raiders there was a family of Black-backed jackals that regularly raided the larder. The Black-backed jackal  is named for the dark, white-flecked ‘saddle’ on its back. From the colour of the light you can see that this jackal came searching for bones in the early morning. 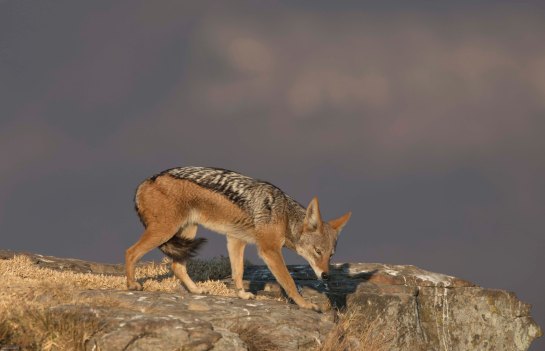 The Black-backed Jackal feeds on small mammals, reptiles, birds, eggs, carrion and fruit. Although they scavenge, they are effective hunters in their own right.

Jackals are known for their cunning and versatility. They are adaptable hunters and scavengers. The three species of jackals are not endangered and  listed by the International Union for Conservation of Nature (IUCN) Red List of Threatened Species as least concern, probably because of their adaptability.

“Adaptability is not imitation. It means power of resistance and assimilation.” – Mahatma Gandhi

At the hide the pickings were easy for these jackals with no mammalian competition and minimal avian competition. This pair removed their fair share of bones meant for the Bearded vultures. They have also learnt that users of the hide do not put all the bones out at the beginning of the morning but rather spacing it throughout the day. So, they came back every few hours to snatch another snack. Jackals are estimated to have noses that are 10,000 times more sensitive to smells than a human. What is not clear to me is whether the jackals actually smelt the new bones we put out at staggered times or just took a chance.  You will notice in all the jackal images that their noses are wet. They produce a serous secretion (on their nose) which they spread with their tongues. The wet nose also helps the jackal to smell. When the tiny scent particles in the air are dissolved in water, they are more likely to set off the “smell detectors” in the animal’s nose. This must create an invisible picture composed of fragrances and odours.

You will notice this male jackal had a thick coat. It was winter in the middle section of the Drakensberg so got very cold at night. Though he also looked old and battle worn.

The jackals clearly knew there were people in the hide and watched carefully to ensure there was no threat. Usually wherever there are humans, jackals tend to be noctural to avoid any conflict.

The Black-backed jackal has a distinctive call which sounds like a rapid series of whaling yelps. In general, jackals are most vocal in the early and late evening. This pair of jackals were silent raiders. 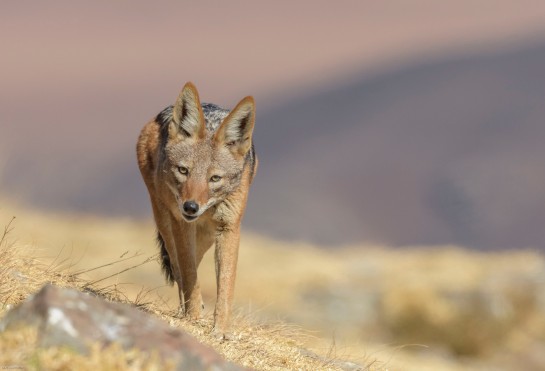 Jackal pairs mate for life and are very territorial. 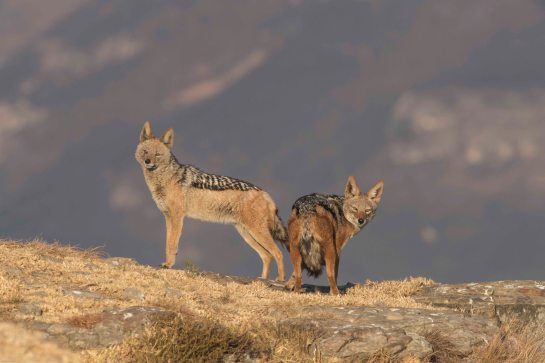 The hide shows that with a little patience  and being quiet you will be surprised how nature slowly reveals herself to you.

“He had learned the rare secret that you must take happiness when you find it – that there is no use in marking the place and coming back to it at a more convenient season, because it will not be there then.”
~ L.M. Montgomery

2 thoughts on “Raiders at the giant’s table”