Mid-September in the Serengeti is early spring. This is too early for most of the raptor migrants, so we saw mainly residents. Migrants such as Steppe Eagles had not yet arrived.

“Once you have travelled, the voyage never ends, but is played out over and over again in the quietest chambers. The mind can never break off from the journey.”

The raptors in the Serengeti at this time of the year were Tawny, Bateleur, Martial and Long- Crested Eagles, an array of Goshawks, Snake-Eagles and Grey Kestrels. On our second day we found a Tawny Eagle hanging around a lion pride. Tawnys know only too well that where there are lions there are bound to be edible scraps. This adult Tawny Eagle saw the lions on the side of the Masira hill and flew over to the largest tree closest to the lions. 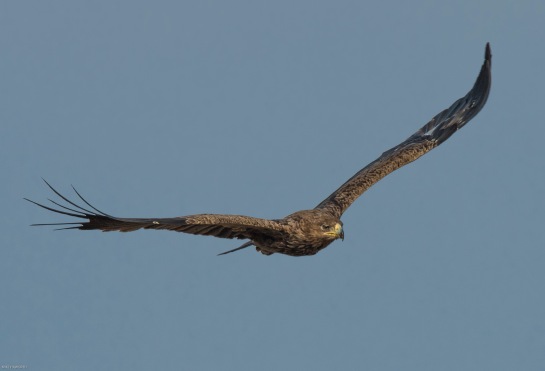 As the lions moved away from the kill site this Tawny Eagle took off from the tree to come down and look for scraps. Often you will see a Bateleur and a Tawny Eagle waiting together. The Tawny  does tend to dominate the Bateleur at a kill site.

This Tawny landed where it thought there were some scraps but had to walk around looking for the left-overs. 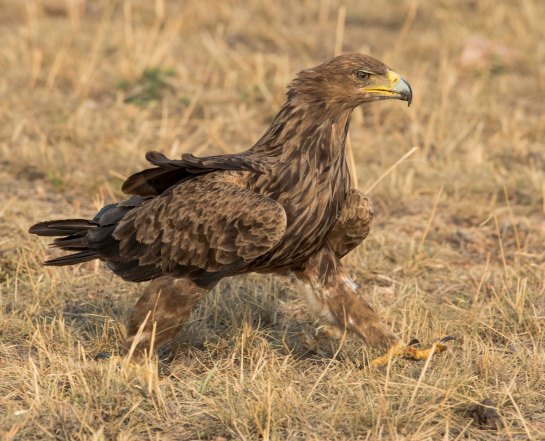 “When the doors of perception are cleansed, men will see things as they truly are, infinite.”

A Grey Kestrel perched at the top of a dead tree branch in the early morning light. This Kestrel was just outside our camp. It appears grey from a distance and the yellow cere and yellow legs are distinctive.

Dark Chanting Goshawk patrolling the grass plains. Chanting Goshawks are so-called because of their far carrying and melodious calls. The head, breast and upperparts are essentially dark grey, while the underparts, other then the breast, are white, finely barred with black. The primary feathers are black and its tail has broad black and white bars.

This Dark Chanting Goshawk flew for  about 30 to 40 metres and then landed to investigate something in the grass then flew off again and repeated the process over and over. It often calls from a perch or in flight, making an accelerating series of piping notes and fluty whistles, which has been described as a song or chant. There are many notes in a series. It gives a high-pitched “peee-u”. Although quite capable of hunting for themselves these Goshawks are known to follow Honey badgers and ground hornbills  looking for scraps or an opportunity to steal their food.

“There is nothing invisible in this universe! There is only our lack of eyesight!”
~ Mehmet Murat ildan

This Secretary bird was also scouring the grass plains looking for anything to eat from snakes to insects, small rodents and birds, even bird eggs. This is an aggressive raptor with legs and feet that can deliver great strike precision. There is no distinctive sexual colour dimorphism. 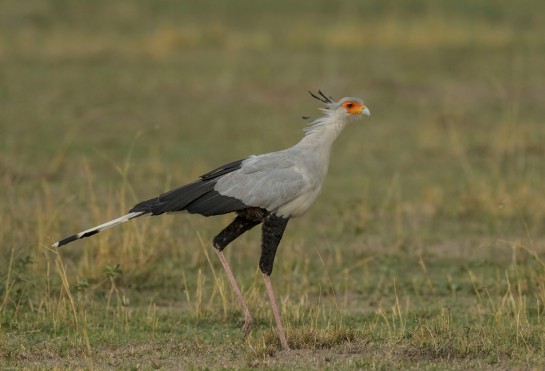 The Secretary Bird’s legs are scaly below the knee and the feet have hard pads underneath. Although they look like long-legged eagles; their front toes are too small to grab prey. Instead they stamp on snakes to kill them and will devour the entire snake swallowing it head first into its crop. Often it will regurgitate the snake later for its partner or young.

Ruppell’s Vulture is now listed as critically endangered on the IUCN’s Red List. We saw only one in the late afternoon on the ground near where a pride of lions had fed. The Ruppell’s Vulture is much larger than the White-backed Vulture. Its back is a mottled brown and white and the base of the neck has a white collar, and its crop patch is dark brown. Although we saw this character on the ground, it is not uncommon for this vulture to soar at heights of 6,000 metres. They tend to be found mainly between the equator and the Sahara and in east Africa. 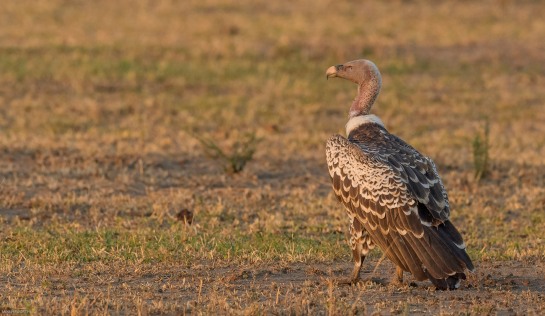 “The eyesight for an eagle is what thought is to a man.”
~ Dejan Stojanovic

The Long-crested Eagle is one of a group of smaller eagles. Its long crest on top of its head is its key diagnostic feature. It also has whitish legs with yellow feet. This eagle prefers to hunt along the edges of forest and woodland areas, especially those adjacent to grasslands as it preys mainly on rodents but will also prey on birds (mainly chicks), frogs and reptiles.

When in flight the underside of its primary wing feathers are white. This eagle was perched on a dead tree stump which was quite low to the ground. As you can see this is a perch hunter.

A lone Black-chested Snake-eagle. They are usually solitary and have that distinctive snake-eagle shaped head  with a crest and small beak. This snake-eagle has a dark brown head, back, face and chest. This raptor is a member of the fourth group within the Accipitridae family along with Serpent-eagles and Bateleurs. 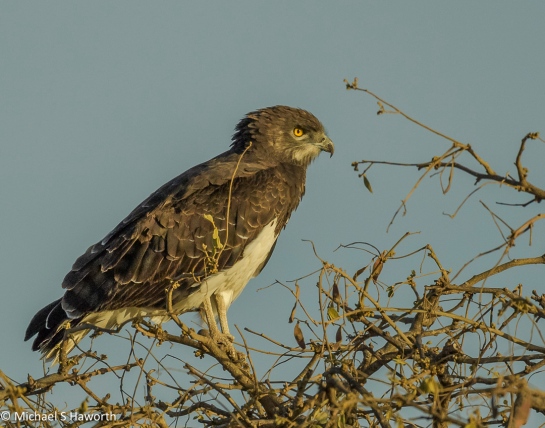 Snake-eagles’ legs and feet are protected from snake bites by thick imbricated or overlapping scales. On take-off, this Black-chested Snake-eagle revealed a white under wing with black bars on the underside to its secondary feathers and black tips to the underside of its primary feathers.

An intimidating looking dark morph Tawny Eagle. This raptor was sitting on a branch above a lion kill. It was waiting for an opportunity to feed on the mostly consumed carcass. 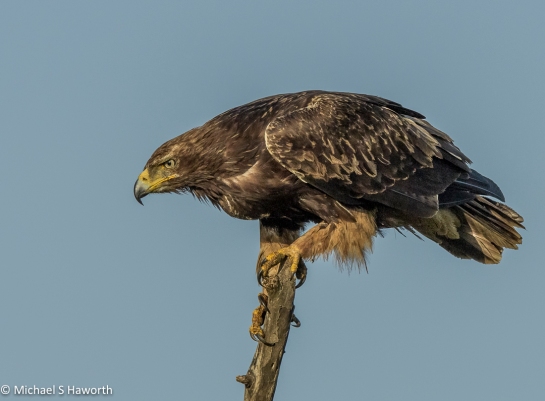 Judging from the full crop, this Tawny Eagle had already fed well but must have been disturbed, probably by a lion.

“…. each with its own beauty, and each with a story to tell.”

This image shows just how extended this Tawny’s crop can get.

Of all the raptors I have seen the Tawny has probably the greatest variety of morph colouring, ranging from blonde to striped to tawny to dark brown. In the next image, the dark morph Tawny was joined by a normal coloured Tawny. These two waited patiently for quite a while. Eventually their patience paid off and they were able to feed on the remains of the carcass.

A Brown Snake-eagle. This snake-eagle is brown all over and has the characteristic bright yellow eye. This is the largest of the snake-eagles and although an eagle, its leg feathers do not grow down to its feet. This eagle is a snake killer – feeding on puffadders, cobras, mambas boomslangs and any snake its sees in the grass. If there is a dearth of snakes it will feed on chameleons, lizards and other reptiles.

The Brown Snake-eagle is also solitary, and is often seen perched on top of tree for hours just searching the grasslands below for prey. 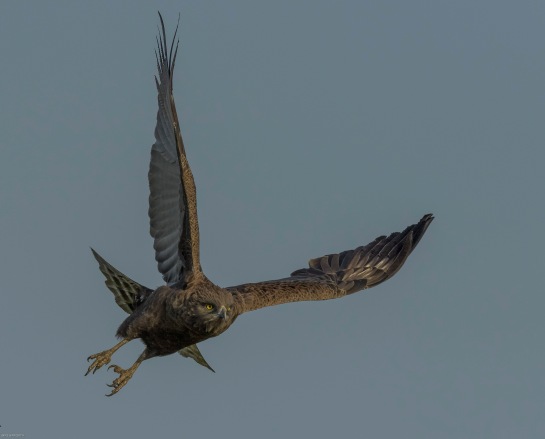 In flight, the Brown Snake-eagle has brown under wing coverts and silvery-grey underside to its primary and secondary wing feathers. 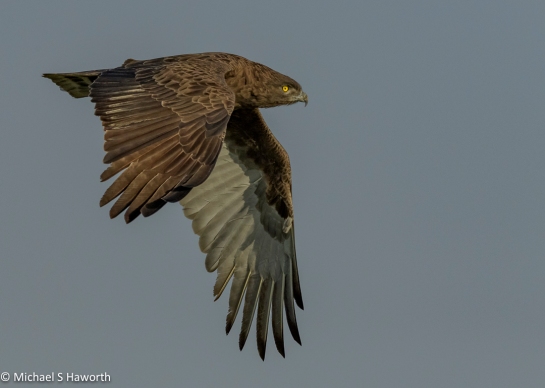 There is minimal interaction between snake-eagles and other raptors. The Tawnys seem to like to mix it up with other raptors mainly because of their size and brawn.

“Evolution has developed man to such a high degree that he builds zoos to keep his ancestors in cages.”

In the view of most paleontologists today, birds are living dinosaurs. As Stephen Brusatte, a paleontologist at the University of Edinburgh in Scotland, indicated a bird did not just evolve from a T. rex overnight, but rather the classic features of birds evolved one by one; first bipedal locomotion, then feathers, then a wishbone, then more complex feathers that looked like quill-pen feathers, then wings. It really makes you marvel at the lineage of birds.

“You travel with modern lines, but you come from ancient times. Old genes in modern feathers. Your acute primal eyes miss nothing. You wear wild armoury on your face and feet. Your primaries help you to feel your way into skyward thermals. Oh we have still so much still to learn about you.”