As a wildlife photographer one of the most important things I can do is to immerse myself in the environment I want to photograph. This immersion gives me a sense of its uniqueness, its inter-connections and the story it has to offer. Photography is about the creative management of light but also about conscious selection of  subject and composition to illumenate the story. Given enough time, when immersed in a scene it will reveal its story.

One the stories revealed in the next three images of an impala ram is of Geophagy. This is the consumption of soil-like substrates such as clay and chalk. Geophagy is commonly observed  in the bushveld, with many wildlife species. Researchers have found it is more widespread in the animal kingdom than previously thought and have observed geophagia in more than 200 species of animals, from parrots to bats, many types of antelope, baboons to elephants, and gorillas to chimpanzees.

This impala ram was eating the soil from the white bank on one side of elephant valley. This is a wide gully formed by storm water and years of wildlife coming down to drink from the river. The whiteness of the soil suggests it is limestone-based. We often see impala, baboon, kudu and elephants eating the soil from this steep white bank at Elephant Valley. This is a favourite game viewing site by boat and is about two kilometres north of Chobe Game Lodge, between Kasane and Serondela. We also regularly see Sable Antelope down in Elephant Valley but they are skittish and I have never seen them eating the white soil.

A common explanation for why animals eat dirt is that the soil contains minerals, such as calcium, sodium and iron, which support energy production and other vital biological processes. An animal’s need for these minerals changes with the seasons, with age and with overall health which may explain why geophagia is especially common when an animal’s diet does not provide enough minerals or when the challenges of the environment demand extra energy.

“A provocative composition must lead you to look beyond, illuminating unanswered questions.”

Also the idea that, in most cases, eating dirt is probably a way to get rid of toxins could explain why people and animals so often prefer clay-like soils to other kinds of earth. Negatively charged clay molecules easily bind to positively charged toxins in the stomach and gut—preventing those toxins from entering the bloodstream by ferrying them through the intestines and out of the body. Detoxification might also explain why some indigenous peoples prepare meals of potatoes and acorns with clay—these foods are bitter because they contain small amounts of toxins. ( Source: Would You Like a Side of Dirt with That? by Philip T. B. Starks, Brittany L. Slabach in Scientific American 1 June 2012)

The next three images are of kudu. This is one of Africa’s most gracious and handsome antelopes. The males carry magnificent spiraled horns, big ears with bluish- grey coats with light vertical white stripes. The bulls also have large manes running along their throat to their chest. It is part of the Tragelaphinae family, which defines spiral horned antelope. There are two types of kudu in Africa, the Greater and Lesser Kudu.  Adult males of the Greater Kudu are generally 35% taller and double the body weight of a Lesser Kudu (Lesser Kudu are not found in southern Africa). Bulls keep growing with age reaching a maximum body size at around 12 years of age.

“Consulting the rules of composition before taking a photograph is like consulting the laws of gravity before going for a walk.”

This lone mature kudu bull was wandering downstream along the bank of the Chobe river. It was late afternoon and it was surprising that he used such a narrow walkway between the river and the adjacent thick bush, which provided good ambush cover for large predators. He had a magnificent set of horns making 2 1/2 graceful twists. The spiral horn of kudu males have been known to grow as long as 72 inches. Unlike the sable, the kudu seldom uses its horns in defense against predators. Dominance is usually quickly and peacefully determined by a size and posture, where using a lateral display where one male stands sideways in front of the other and makes himself look as large as possible. These large horns are also not a problem in thick wooded bush because the kudu just lifts up his chin up and lays the horns against his back, moving easily through dense bush.

“If you are out there shooting, things will happen for you. If you’re not out there, you’ll only hear about it.”

The angle of light was not ideal given the sun was directly behind this kudu bull, so this image was not taken for its photographic quality but rather to show you that antelope would rather drink from a small pool next to the river than directly from the river. Presumably this is because of the threat of attack from crocodiles. I have often seen sable do the same thing down at Elephant Valley.

Kudu bulls reach adult maturity at around 4 years of age.  A young kudu bull’s horns will have their first twist by around 2 years of age. The females usually do not have horns and are much smaller than the males. Kudu are browsers so feed mainly on the leaves of trees and bushes.  This small family group of two females were just downstream of elephant valley and were also eating the white soil from the same limestone ridge, although it was a much more dangerous place to feed as there was no easy escape route. 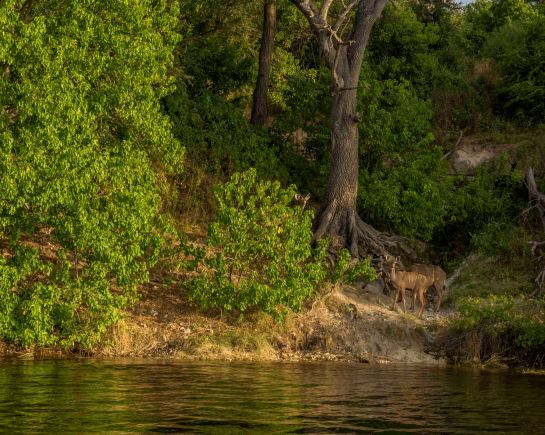 We were also fortunate enough to also see Puku. This is a medium-sized antelope, which resembles the lechwe, but the puku lacks the lechwe’s brown foreleg markings, and is smaller than a lechwe. The Puku is found mainly in wet grasslands in southern Democratic Republic of Congo, Namibia, Tanzania, and Zambia. A limited number can be seen in northern Botswana in the Chobe area.

Puku breed year round but are more sexually active after the first heavy rains of the wet season. This is a gregarious antelope and territorial males are polygynous and herd females into their territories. The social system is centralised on adult males maintaining and defending territories which accord them breading opportunities amongst wondering female herds. Territorial males maintain their territories throughout the year. ( source: Animal Diversity Web)

Puku males make a set of unique shrill whistles to communicate, either to warn other males to stay away or to protect their territory. Solitary males emit 3 to 4 whistles to warn other males to keep away. This whistle is also used as a way to advertise to females. Territorial and bachelor males can be identified by glandular secretions on the neck. Territorial males excrete more hormones from their neck than bachelor males. Territorial males use their glandular secretions to spread their scent over their territory. Neck patches only appear between the months of May and November. 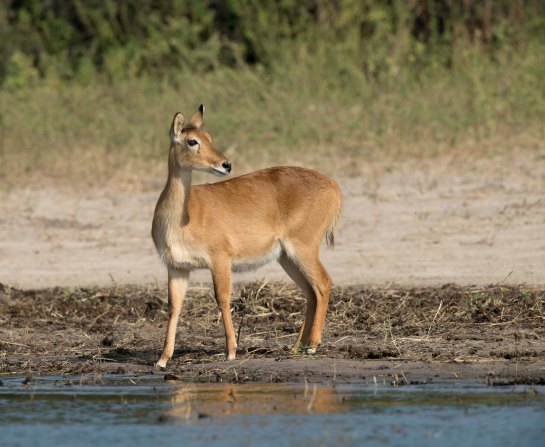 “Photography, as a powerful medium of expression and communications, offers an infinite variety of perception, interpretation and execution.”
~Ansel Adams

Puku are crepuscular, so are active in the early morning and late afternoon. They seem to prefer open grass area near a river or swamp but not wide wet flood plains like the lechwe.

“Your photography is a record of your living, for anyone who really sees.”
~Paul Strand

The beginning of winter signals the start of the impala rut. During the rut, the impala rams’ testosterone levels start skyrocketing and they begin to fight for territory and dominance over female herds. The dominant males will fight off any competition, forcing the losers into bachelor herds. The noise of the rutting males can be heard for long distances as the winners proclaim their territories with snorts and growls. The victorious males then take charge of their herds of females and attempt to mate with as many as possible. They never mate with the same female more than once.

“Photography gives us the ability to freeze light, time, uniqueness, mood, emotion and wonder with a frame.”

We were on the river in late April which was the build up to the full moon at the end of April. Impala begin rutting with the moon waxing around its First Quarter stage in late April. This is a time when you will hear the males “roaring” and see many fights with territorial males chasing rivals out of their territories.

“I think life is too short not to be doing something which you really believe in.”
~Steve McCurry

The natural intelligence in nature determines that impala tend to rut mainly by moonlight, making them less vulnerable to predation. Consequently, the most intense part of the rut phase is when the moon is full. The intensity diminishes as the moon wanes into its Third Quarter phase, when the night stalkers again have the advantage.

The three week rut takes place at this time of the year so that the ewes synchronise their lambing shortly after the onset of the summer rains, approximately six to seven months later. Synchronised birthing determines that enough lambs survive, despite heavy predation, for the population to be sustained.

What always surprises me when on the Chobe river is that there is always something happening even when all looks quiet. The change in temperature, length of day and river levels have a profound influence on the “who, what and where” of the wildlife activity. A superficial look might give the impression that little is happening. A closer, quieter, more attentive look reveals nature’s more fascinating rhythms. You need to see for yourself how the landscape changes when this river comes down in flood, Rivers become lakes and grasslands become swamps. It is also the time of the year when it is still warm and the boat trip back to the lodge after an afternoon’s shooting usually provides dazzling, dramatic sunsets.

“The great photographers of life – like Diane Arbus and Walker Evans and Robert Frank – all must have had some special quality: a personality of nurturing and non-judgment that frees the subjects to reveal their most intimate reality. It really is what makes a great photographer, every bit as much as understanding composition and lighting.”