It was our last day and we were not going to waste any of our remaining time in this wonderland. We were up and out before sunrise,  hoping to see the end of the night shift. The Trichilia area in Mana seems to be a magnet for game. It was around 5h30 and we had driven about 100 metres out of camp, when we found this pride of lions.

“Life is a journey; Time is a river. The door is ajar…”

After a few minutes of watching them, the two lionesses in the pride walked away from the river. The youngsters remained for a few more minutes, lying on the edge of one of the alluvial terraces. They had a wonderful view across the Zambezi lying in luxuriant vegetation next to the river.

“Advice from the river. Go with the flow Immerse yourself in nature. Slow down and meander. Go around the obstacles. be thoughtful of those downstream. Stay current. The beauty is the journey”.

One thing that strikes you immediately about the Mana lions is that they look ragged. It is clear that living in Mana is not easy, even for lions. This lioness looked as if she had lived rough for a long time. She was also looked fairly old.

“This process of the good life is not, I am convinced, a life for the faint-hearted. It involves the stretching and growing of becoming more and more of one’s potentialities. It involves the courage to be. It means launching oneself fully into the stream of life“.
~Carl Rogers

This older female was leading her pride away from the river to rest in the forest somewhere. She really took her time to stretch and and sharpen her claws and appeared to really enjoy it.

“The one excellent thing that can be learned from a lion is that whatever a man intends doing should be done by him with a whole-hearted and strenuous effort.”

The sun had just started to rise in the east and light was clear with soft contrast and it caught her eye perfectly. You can see that there was no fat on this female, she was lean and built for hunting.

Eventually, the other younger lions followed the older lioness away from the river. They walked through the Natal Mahogany grove. It is not often you get lions walking past you and looking directly into the rising sun with the light catching their eye perfectly.

A second lioness with one of the cubs were following the lead lioness. They walked across the road right in front of us. They were too close to get off the vehicle and get a eye level shot.  I thought this image showed just how tough this lioness looked but the life in her eyes burned brightly.

Give her an hour or so and those eyes will not be so wide open and alert. She has probably been out and about the whole night.

“It is better to conquer yourself than win a thousand battles”.

The two lionesses were walking away from the river into the forest. We got off the vehicle and followed them on foot, giving them enough space not to push them. The lions walked into a lush croton grove and that was the last we saw of them.

On their way, the lions drew the attention of many onlookers. They walked past plenty of game but did not attempt to hunt. Needless,to say, the eland, baboons and Impala all watched them very carefully.

After spending some time with the lions, some of our group had to get back to camp as they were catching a flight out to Hwange later that morning. Dave, Jocelin and myself stayed behind. Dave and I were leaving that afternoon and Jocelyn was going to stay another three days (lucky lady). Having bid our farewells, we decided to walk down river to see the Carmine Bee-eaters with Tanya leading the way, of course. This was the view looking north-west back up the river towards camp.

“I would love to live life as a river flows, carried by its own unfolding”.

Little Bee-eaters and White-fronted Bee-eaters are endemic in this area but the carmines migrate back in spring when the insect life is at its highest. 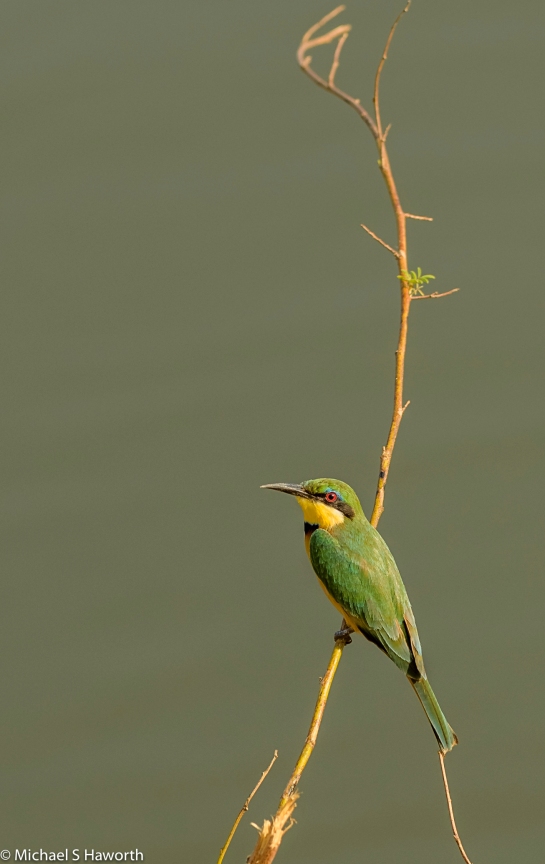 It is interesting to see how  dead trees which fall into the river provide a base from which much other vegetation grows. It also acts as hub for many insects and plenty of birdlife.

About a kilometre down river along the Zimbabwe side of the Zambezi, we found a small colony of Carmines, probably 1000 or so. The carmines’ colours appeared richer than we find in South Africa and it was amazing to see almost every bee-eater in flight had an insect in its beak.

As we saw at Kalizo, in the Caprivi Strip, the carmine colony is frequented by Yellow-billed Kites. These kites are quick enough to catch a carmine on the wing but their success rate is low. They are mostly hunting for the weak or injured birds and of course the real raiding will start once the chicks hatch and start to try to fly. 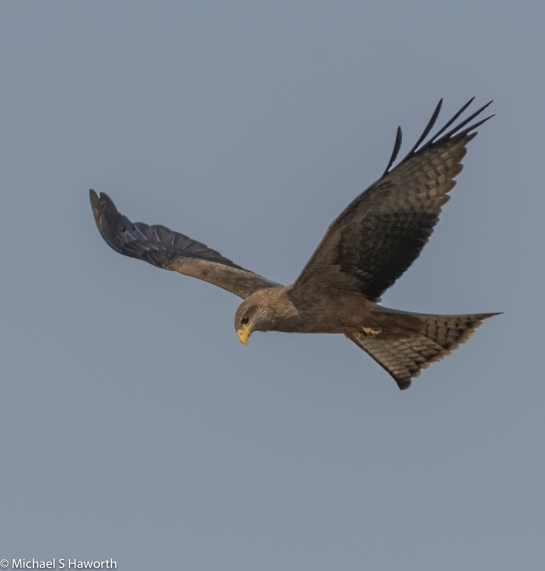 With these birds you have to pick your shots. Many fly some distance away but every now and then one or two individuals will fly close to you, and those are the shots.

“Keep your rivers flowing as they will, and you will continue to know the most important of all freedoms—the boundless scope of the human mind to contemplate wonders, and to begin to understand their meaning”.

The Southern Carmine Bee-eater hawking insects. It has that stunning carmine breast and belly colouring. It is distinguished from it northern cousin by its jade crown where as the Northen Carmines crown and throat is jade to blue in colour.

These carmines hawk insects from a perch and are highly skillfully flyers. Tapering, low-aspect-ratio (ratio of length to width) wings are found on birds, such as bee-eaters, which must be fast and agile in order to outmaneuver both their prey and their predators.

This was the part of the river bank where the carmines were nesting. Most of them roosted in the trees above the bank but some families were very busy excavating and preparing their nests. This is a migratory species, spending the breeding season, between August and November, in Zimbabwe, before moving south to South Africa for the summer months, and then migrating to equatorial Africa from March to August. The migration is thought to be driven by the fluctuations of insects, which drop off sharply in the southern African winters. 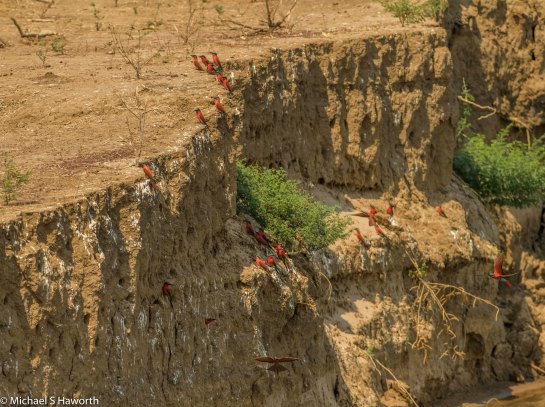 A view looking back up the river from the carmine colony. This is an exquisitely beautiful part of the world, wild with abundance.

“Wild rivers are earth’s renegades, defying gravity, dancing to their own tunes, resisting the authority of humans, always chipping away, and eventually always winning”.

I wish I was the water flowing down the Zambezi
Swirling through the grasses, tickling the roots of trees.
I would rush over dark rocks, twirling and flirting,
Flushing the tiger fish down gurgling rapids
I’d laugh hysterically as I crashed and soared
Over and down the granite lip of Victoria Falls
Exploding 110m deep beneath in a dark and terrifying hole
I’d bubble forth and rise to the surface
As light as the air, revitalised by the most mighty massage
I’d dash through the gorges, laughing at the white water rafters
Fearful yet joyous at my strength.
I’d visit both Zimbabwe and Zambia, no need for a passport
Exempt from a Visa fee, no thought as to my nationality
I’d soar to the heavens, picked up by the sun
And dart down to earth again, to have some more fun
I’d be best friends with the frogs, I’d caress the skin of hippo’s
Brush clean the teeth of crocodiles.
I could be sucked up the trunk of an elephant child
He’d snort me back out, I’d never forget the gentle, loving giant
Down, down further I’d go
Smoothly flowing across sandbanks, marvelling at wildife
Red filtered light as I passed through fish gills
Coming up gasping, eyes on the Zambezi escarpment hills
Oh I’d be quite long on my journey
Finally crossing into the Mozambique delta
Lost amongst pampas and waterberry trees
I’d see a final sand barrier and suddenly I’d be at one with the sea.
Oh I wish I was the water in the beautiful big Zambezi.

A big thank you to Marlon Du Toit from Wild Eye for putting together a wonderful wildlife safari. Mana Pools is a very special wildlife area and the photographic opportunities and light in the forest are unique. What made it more special was the ability to get off the vehicle and walk. Tanya, our Mana guide, was superb and very knowledgeable. Your understanding of the wildlife made us all feel reassured even when close to big game. Lastly, to Dave and Tess from Mwinilunga Safaris who hosted us in the camp. It was such fun. Tess and her team’s cuisine in the bush was outstanding and it was wonderful to reacquaint with friends last seen decades ago. I will be back same time next year – for sure.