Our first night in Mana was a night filled with the sounds of the bush. The camp comprised tents which were positioned  in a grove of Natal Mahoganies right on the banks of the Zambesi. The beauty of a tent is that you hear everything. An elephant was trumpeting its displeasure somewhere down the river. A lion roared some distance off and hyaenas were whooping intermittently though the night. The baboons which were trying to sleep in the Natal Mahoganies above us, were restless. There could have been a leopard around. Of course when you are sleeping right next to the river you will hear the hippos grunting at each other all night. It reminds you that you are sleeping next to one of Africa’s rivers. I am a light sleeper as it is, so I had an interrupted but restful night. The edge of the river at Mana is characterised by alluvial terraces. Next to the camp, the terrace must have been five or six metres above the flowing Zambesi.

“Live in the sunshine, swim the sea, drink the wild air.”

The camp routine was up at 4h45, coffee and a rusks around 5h00 and be ready to “rock n roll” by not later than 5h30. Tess was up with hot coffee and biscuits for us. It was light at that time but well before sunrise. We wanted to get out early to see the tail end of the night shift as they were making their way back to rest. It was also relatively cool at that time.

“It is in the wild places, where the edge of the earth meets the corners of the sky, the human spirit is fed.”

The temperatures early in the morning were warm and balmy, the colours were soft pastel pinks, mauves and and apricots. These colours framed by the deep green of the Natal Mahoganies flood your visual senses creating indelible memories. We were very fortunate to have two guides Marlon Du Toit from Wild-Eye and Tanya Blake from Mwinilunga Safaris who knew the area well. Tanya guides in Mana Pools and knows the area intimately. The decision was made to go back to the area we last saw the wild dogs and try to pick up where we left off the previous evening – a tall order given that the wild dogs are very mobile and can move great distances in a few hours.

As happened the evening before, we had not gone more than half a kilometre from the camp when we stopped to watch next visitors, this time lions. They were lying on one of the upper sand terraces above the river. It was a very peaceful scene.

As the sun began to rise above the horizon, the lions moved off. This next image is of one of the young males wandering off to look for a cool spot to rest for the day. 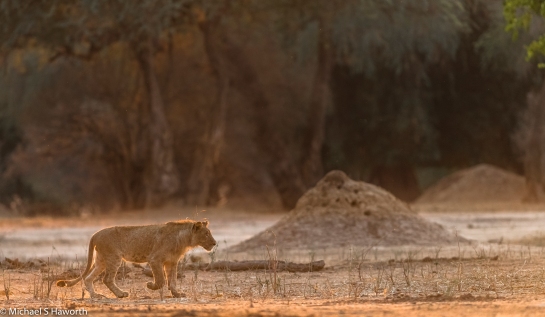 After watching the lions for a while we moved east with the hope of finding the wild dogs again. As the sun rose, the morning sunlight peered into the forest. The rustic hazy forested background provided a wonderful backdrop for unusual wildlife portraits. This female baboon was feeding on the leaves of the sausage tree. The blood-red flowers of the  sausage tree bloom at night on long, rope-like stalks that hung down from its branches. The inflorescence is a panicle, 30-80 cm long. The tubular flowers are dark red with yellow veins, and have an unpleasant smell to  humans, but are attractive to bats, insects and sunbirds which pollinate their nectar-rich blossoms. 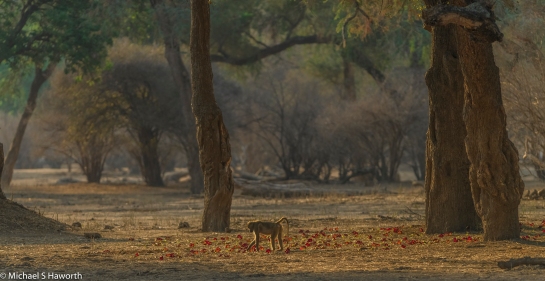 The bounty of crimson flowers carpeting the ground under the sausage tree each morning was welcomed by baboon, impala, kudu, eland and elephants alike. It is quite amazing that in early spring when there is little to eat, the sausage tree provides its bounty to compliment the albida shedding their seed pods which the elephants seem to love. If the albidas are not shedding their pods fast enough, the occasional elephant gives the albida’s trunk a head shake which normal dislodges the seedpods. 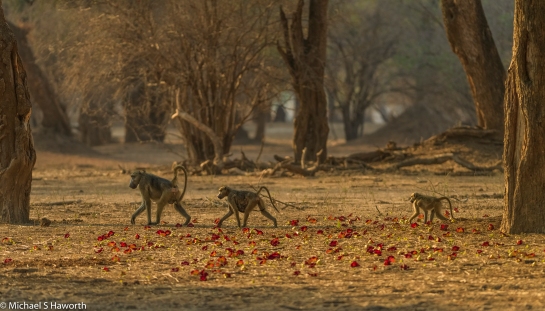 Looking across the Zambesi, we found two hippos lazying in the shallows and they also looked to be gazing out across the river towards Zambia. The Cattle Egret seemed to be enjoying its preferential hunting position. The Zambesi river is quite wide in parts. It is relatively shallow with many sand bars and a series of deeper channels.  These beautiful waters need to be treated with respect, the hippos are territorial and the crocodiles or “flat dogs” as we like to call them, seem to be always ready for another meal. One of the special aspects about Mana Pools is that most of your photography will be done on foot, not from a vehicle. You are not allowed to drive off road but you are allowed to get out of your vehicle and walk. This allows you to walk into the forested areas to capture more intimate shots of elephant and other wildlife which you would not get from a vehicle.

“May you live all the days of your life.”

The forests in Mana are indescribably beautiful and moody, not in a threatening but rather an enchanted way. The light streams through the canopy highlighting various branches and patches of ground.

Looking deeper in the forested area reveals soft hazy blues, closer browns and oranges and a multitude of different greens. 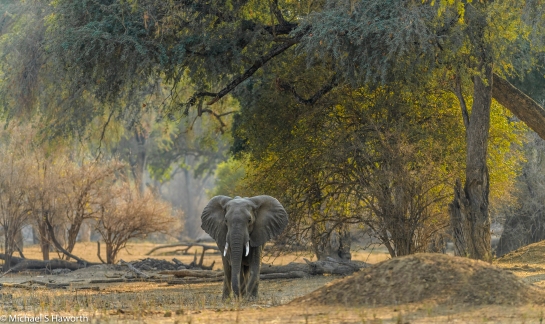 When you can see the eye of a elephant you very quickly get the sense that these are highly intelligent, sentient beings. 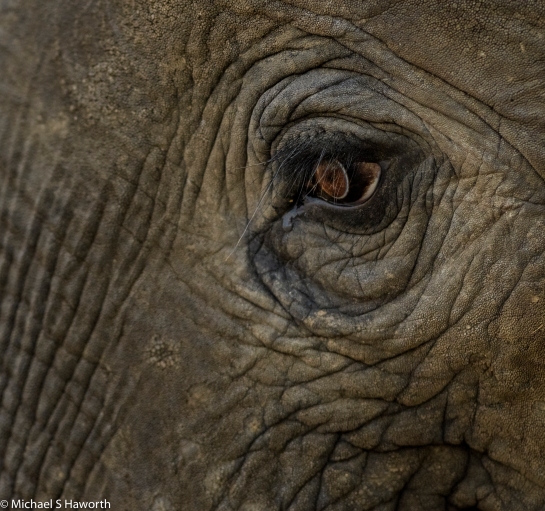 I was told that there are two main elephant bulls who stand on their hind legs to reach the lower, though elevated, branches of the Albida trees.  The next images shows Fred, presumably named after Fred Astaire. This bull stands up , lifting his six tonne bulk onto his back legs and can balance for quite a while standing up like that. Fred stands up unusually straight which presumably gives him additional reach. 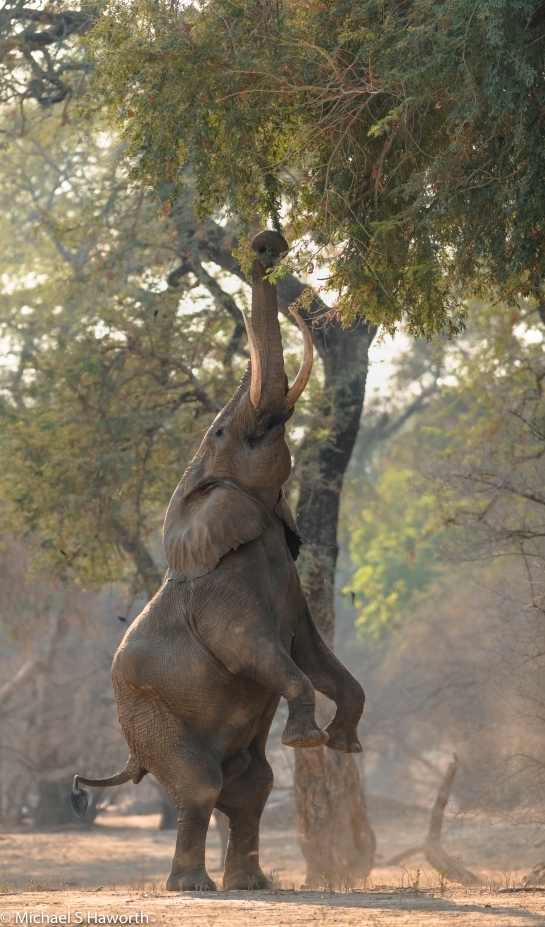 It is unusual to see a wild elephant bull standing on his back legs. A six tonne balancing act. This is clearly a learned skill. He grasps a branch with his highly prehensile trunk and pulls it down until it breaks and falls to the ground. He proceeds to feed on branches lying on the ground but he does not share. There are two other bulls who follow him around, but they only get the scraps. 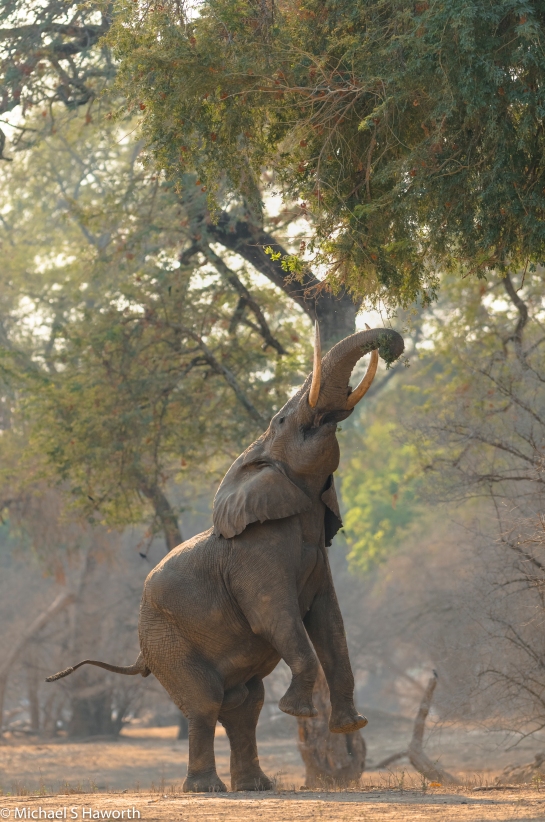 Even from a distance this is a remarkable sight and testament to the adaptability of these intelligent beings.

“We take photos as a return ticket to a moment otherwise gone.” Mana is know for its four pools that retain water in the dry season. Chisasiko pool is one such pool. It is a vivid algae green pool. I am sure there was a lot of algae in the water but the greens were enhanced by the reflection from all the bushes alongside the pool. There was plenty of bird life along the edges of the pool. 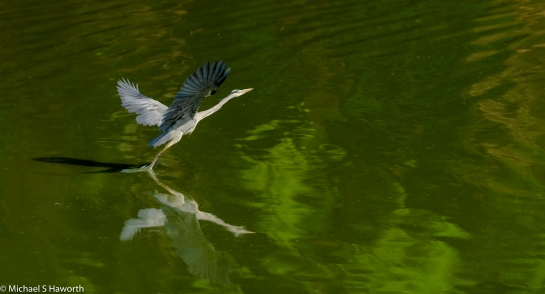 This Grey Heron took off away from us, but we also saw White Crowned Lapwings, Glossy Ibis, Ruffs, Yellow Billed Storks, to name just a few. I did not focus, from a photography perspective, on birds this trip as I did not have a long lens. My longest focal length was a 300mm. 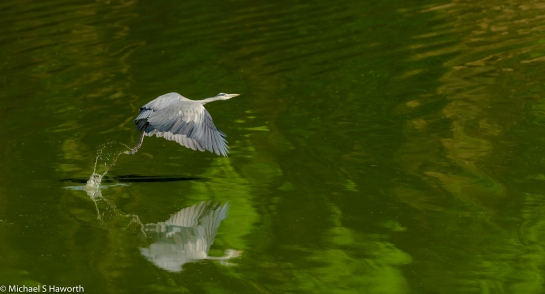 At the east end of Chisasiko pool, the Impala came down to drink. The angle of the ground leading into the water usually gives you an idea of how shallow the water is close to the bank. Despite the shallow water, the Impala were very wary. Not only is there a lot of bush around the pool, making good cover for a predator ambush, there were also many crocs in the water.

This spoonbill was working hard, swishing its flattened bill back and forth feeling for food.

I was more intrigued by the colour and texture of the water than the spoonbill.

That afternoon we ventured further west looking for the wild dogs only to find a herd of buffalo about half a kilometre from the road. This is where Marlon and Tanya’s knowledge of bush and wildlife behaviour was invaluable. Marlon was looking to get us into a good position to capture this buffalo herd in that special Mana light, while Tanya was keeping an eye on the buffalo herd to ensure our safety and to ensure that we did not unsettle the herd unnecessarily.

“Cherish sunsets, wild creatures, and wild places. Have a love affair with the wonder and beauty of the earth!”
~Stewart Udall It is quite a thing to have a herd of about fifty buffalo staring at you from about forty metres away. 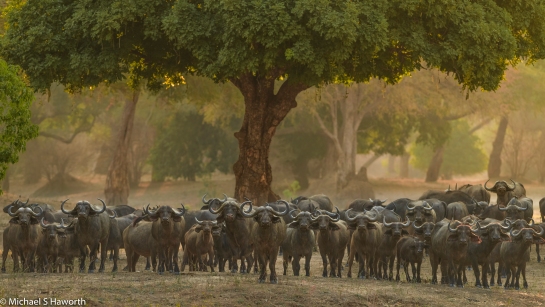 By the time we had finished photographing the buffalo it was getting dark. They needed some peace and we needed to get back to our vehicle which was some distance off, back at the road. Being able to walk in Mana makes it a unique photographic experience. I think its is wise and respectful of the wildlife to have a guide with you who can track and read the animal’s behaviour. That way you do not unnecessarily stress the animals and do not put yourself in unnecessary danger.

“Africa is mystic; it is wild; it is a sweltering inferno; it is a photographer’s paradise, a hunter’s Valhalla, an escapist’s Utopia. It is what you will, and it withstands all interpretations. It is the last vestige of a dead world or the cradle of a shiny new one. To a lot of people, as to myself, it is just ‘home.”

5 thoughts on “Mana Pools-seeing the light”