In mid-October, I returned to Mana Pools after a break of about 18 years. I went on a Wild-Eye photographic safari led by Marlon Du Toit. We spent a wonderful five nights and days  camped along side the Zambezi river. Our hosts were old friends, Dave MacFarland and Tess Arkwright, who operate Mwinilunga Safaris. It was wonderful and heartwarming to reacquaint with hospitable friends last seen many years ago.

“There is a magic, a poignancy, a sense of excitement about the bush that is not only gripping, it is addictive. Once bitten by the ‘bush bug’ a person is infected for life. Bush fever is a kind of madness that compels you to return and return – a longing which will seize you by the throat until, you would gladly sell soul for the sight of a dry thorn tree against an empty sky, a herd of wildebeest wheeling under their cloud of dust, or the deep rasping “augh!” of a lion prowling in the night. The veld has a scent all of its own too, a combination of dust and dung and sunshine, a heady fragrance that fills the lungs and intoxicates the blood like strong wine.”

I had very mixed feelings about going back to Zimbabwe because of what has been done and continues to be done to that country and her people. I had been looking at the wonderful images being blogged by visitors who had visited Mana Pools  and the tug on my heart-strings had been growing. I am very pleased I went back and I will go back again to see special places like Mana and spend time with wonderful people like Dave and Tess.

I first visited Mana Pools around 1963 or 1964 when my Dad built the steel structure for the first treetop lodge in Mana for a European investor. My memories remain of vast herds of buffalo which you could see in advance because of the huge dust cloud they stirred up, black rhino (sadly none exist here now) and Honey Badgers at the foot of the treetop lodge stairs. The bush is drier than I remembered it, but it was early spring so it is  seasonally dry at that time.

The charter flight from Harare to Mana takes about one and a half hours. You know you are getting close when you pass over the rugged escarpment and onto the flat flood plain with its large snaking rivers of sand and areas of thick Jesse. The feeling of flying into the dirt runway at Mana was indescribable. Floods of nostalgia mixed with great anticipation stirred many of the old feelings. Dave and Tess’s Mwinilunga Safari camp was perfect. It is located on the bank of the Zambesi in the Trichilia area.  The tented camp was positioned under a grove of large Natal Mahogany trees which have a thick canopy of dark green leaves providing wonderful shade in a very hot environment. I remember that October was always considered “suicide month” in the Zambezi valley because of the heat. It was hot, 40 degrees centigrade in the shade. I do not have a problem with the heat as I always associate it with holidays.

The Cape Hunting or painted dogs or just wild dogs, for short, had not been seen for the previous ten days but returned to the Trichilia area the day we arrived – serendipity.  We found them down next to the river in the late afternoon. I am not sure but the pack was about 12 dogs strong.

The wild dogs went down to the Zambesi for a drink. These wild dogs seemed to be well aware of the dangers which lurk beneath the surface of the water.

After much peering at the water they started to drink, but always with one or two individuals standing guard.

A silhouette of two adult wild dogs with one of the islands in the Zambesi in the background. It was hot so the dogs took every opportunity to stand in the shade. 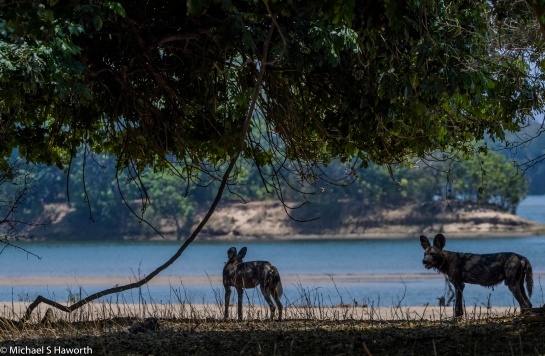 The Zambezi river is one of Africa’s main rivers and forms the northern border between Zimbabwe and its neighbours from Victoria Falls to Kanyemba. In the late afternoon the waters  sparkle, the  banks display a verdant green and the distant hills are painted with soft hazy blues.

“Time is a flowing river. Happy are those who allow themselves to be carried, unresisting, with the current. They float through easy days. They live, unquestioning, in the moment.”
~ Christopher Darlington Morley This wild dog was looking down towards the water’s edge just in front of our camp, probably looking at a hippo or crocodile. The Trichilia island was on the other side of a channel. 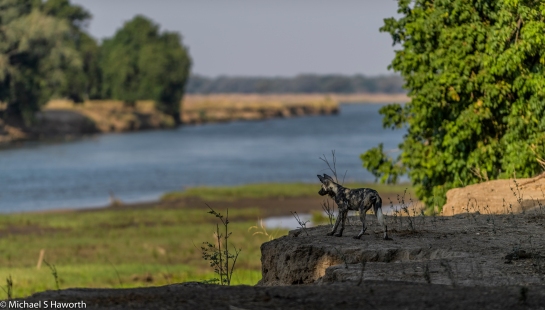 A view of the channel adjacent to the Trichilia island framed by the dark green leaves of the Natal Mahogany tree.

Full frontal with a large and  inquisitive bull elephant. The older bulls seem more relaxed. It is the younger bulls which are more mischievous with something to prove. 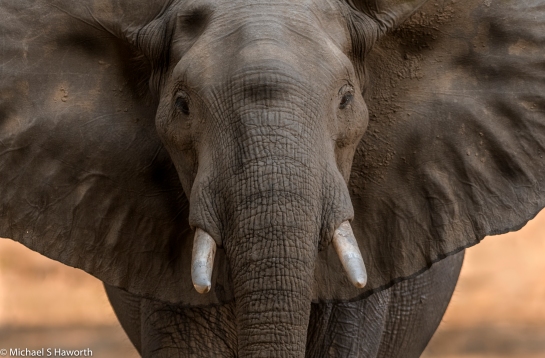 The next image was taken close to our camp, standing in the shade of the Natal Mahoganies. The Trichilia Emetica or commonly named Natal Mahogany is an evergreen, large tree, which grows as high as 25 metres, with separate male and female plants. This tree creates a thick canopy of dark glossy green leaves. This was the view looking through a part of the Trichilia grove north across the Zambesi toward Zambia.

On our first afternoon we did not go far because we chose to stay with the wild dogs and walked with them for about half a kilometer inland. They decided to rest in the shade as it was very hot. This young bull elephant was wandering towards the river and his path took him close to the wild dogs. Being young and mischievous he chased a few wild dogs out of his way. 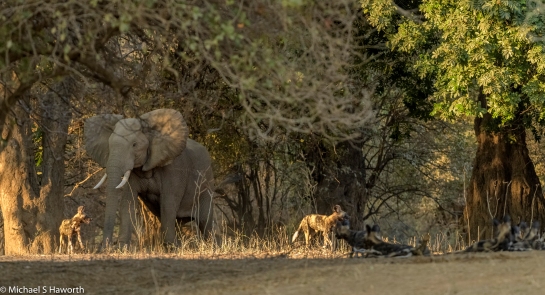 The mood of the bush changes significantly when the bright sunshine is hidden by cloud. This image was taken in the late afternoon while the sun was shielded by cloud and a few shafts of light were beaming from beneath the thick cumulus clouds.

After being disturbed by the young bull elephant, the wild dog pack moved back closer to the river as the sun started to sink. In the late afternoon, the dust stirred up as the wild dogs were walking turned into a golden glow around their feet.

“When you’ve acquired a taste for dust,
The scent of our first rain,
You’re hooked for life on Africa
And you’ll not be right again
Till you can watch the setting moon
And hear the jackals bark
And know that they’re around you,
Waiting in the dark.”

The sun had sunk to just above the distant hills and below the tree line. The colours at this time of the day were vivid. It is also a time of peace. The intense heat of the day was cooling and few of the wild dogs were catching up on some rest while others kept vigil.

These wild dogs were in lion, hyaena and leopard turf and the sun was setting so they needed to be on guard as the night shift was probably starting to stir.

Looking in the opposite direction towards the setting sun. The colours were saturated, the intense heat was easing and the bush was still, as it is when the day gives way to night. It is almost as if time is suspended. The dogs were resting and for a brief period there was peace and serenity.

On our first afternoon in Mana, we spent some time on foot with the wild dogs, which was a treat and privilege. The feeling of being back in a special part of one of the wild places of Africa which, for me, is steeped in memories was wonderful. It is interesting how you put things into the background as life moves on and you have to, but there is something about this place which floods your senses, illuminates your imagination and reignites those long-held memories.

“When you long to see the elephants.
Or to hear the coucal’s song,
When the moonrise sets your blood on fire,
You’ve been away too long
It’s time to cut the traces loose
And let your heart go free
Beyond that far horizon,
Where your spirit yearns to be.”