This is the second post from our recent trip to the Chobe and Zambezi rivers in mid-October with CNP Safaris. This post is focused on African Skimmers and dedicated to fellow photographers Peter and Susanne Scheufler who were especially charmed by the African Skimmers, so much so that Peter’s nickname is now “Skimmer”. Both are great photographers and I am sure they have much better images than I, but I wanted to share some of the wonderful sightings of African Skimmers we were privileged to see.

There are three geographically separated species of Skimmer and are all from the genus Rynchops. All three species look similar but with colour variations. The Black Skimmer (Rynchops Niger) is found in North and South America. It has a dark bill tip and to all of its plumage and a black nape in breeding plumage. The African Skimmer (Rynchops Falvirostris) is found throughout sub-Saharan Africa and the adults have a yellow tip to their red-orange bill. The Indian Skimmer (Rynchops Albicollis) is similar to the African species but has a white collar. These differences disappear in the non-breeding season when all Skimmers have white collars around their neck. I intend focusing on the African Skimmer because this is the species we saw.

The African Skimmer is an attractive long-winged, short-tailed tern-like bird. The back, nape, crown and top of the wings are black. Their neck and belly are white as is the underside of the wings and tail. When standing on the ground their little vermilion coloured legs look disproportionately small making them look like a tern. Their feet are structured for standing on sandbanks rather than perching on branches.

Their bill is one of the most unusual and interesting aspects about this amazing bird. The top mandible is red-orange and considerably shorter than the bottom mandible, which is also red-orange at the base but the colour fades from red-orange to a yellow becoming almost translucent at its tip. The bill is vertically narrow where the lower mandible narrows further into a blade and this is for cutting the water’s surface. The African Skimmer has relatively big deep-brown coloured eyes, which have enhanced night vision.

Another special adaptation is that this bird has unusually long and relatively narrow wings. These long albatross-like wings enable these birds to be acrobatic in flight and turn very sharply in any direction.

Another special feature of these birds is that when skimming over the water, they are able to fly with a half wing flap rather than a full up and down wing stroke – a sophisticated flight adaption –  and they are able to hold their head steady in this flight mode.

At times the flying displays these birds provide make it look as if they are doing it for the pure exhilaration of flying. It is amusing to watch the juveniles when they start to fly. It is as if their wings are too powerful and they initially struggle to control their flight and when landing, until they get the hang of it, the lower mandible ends up digging into the sand and the youngster comes to an abrupt halt, unharmed. 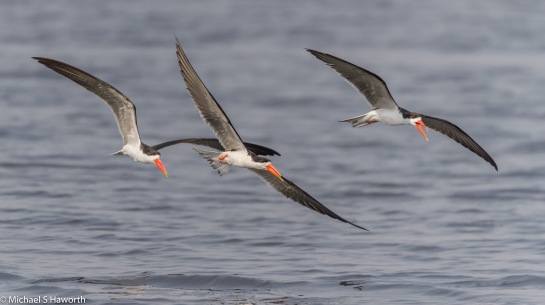 The African Skimmer is found across much of sub-Saharan Africa, but is absent from arid and semi-arid areas given its reliance on small fish as a food source. The African skimmer is found from Senegal to northern Congo River, Uganda and southern Nile Valley, southern Tanzania to the Zambezi Valley, Angola and the Okavango Delta and along the Chobe and Zambezi rivers and in isolated parts of South Africa such as KwaZulu-Natal.

“Wild rivers are earth’s renegades, defying gravity, dancing to their own tunes, resisting the authority of humans, always chipping away and eventually always winning.”

They live along large tropical rivers with sandbanks, lake shores, and coastal lagoons. In Southern Africa, the African Skimmer is generally uncommon but can be seen in localised spots in the Caprivi Strip in eastern Namibia, northern Botswana, northern Zimbabwe and central Mozambique.

On this particular trip it was unusually hot. Even the Skimmers needed to swim to cool down. Some of the adults ventured to the water’s edge and submerged themselves in water and repeatedly putting their heads under the water – wary of the ever-present threat of crocodiles big and small.

After having “dunked” themselves under the water they would jump up and flap their wings vigorously to remove the water.

Other adults took to bathing in the middle of the river. Here they would “belly land” in the water and take-off again and in the process completely soaking themselves. This did not impair their flying in any way at all.

When not bathing or protecting their nests, there were other times when a pair of Skimmers would break off and fly in formation in what almost looked like a chase. It was difficult to know whether it was combat or a ritual mating display.

The displays were acrobatic, fast and usually high in the sky giving the birds time to recover the aerodynamics over their wings.

It was spell-binding  watching these acrobatic, aeronautical wizards in full display. 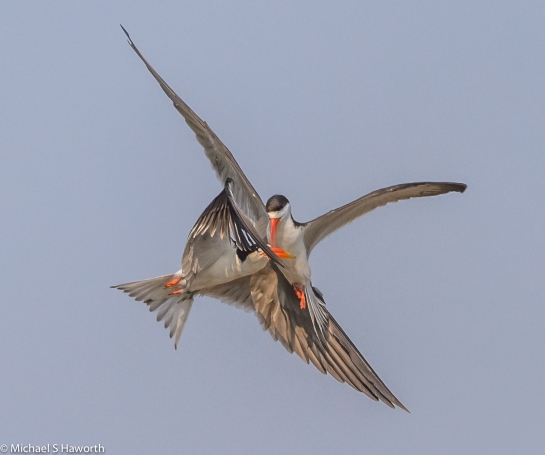 Their aeronautical displays were something to behold.

“Night and day the river flows. If time is the mind of space, the River is the soul of the desert. Brave boatmen come, they go, they die, the voyage flows on forever. We are all canyoneers. We are all passengers on this little mossy ship, this delicate dory sailing round the sun that humans call the earth. Joy, shipmates, joy.”

The displays would go on for some time and at the end, amazingly, these birds did not seem to be tired or panting heavily, even in the extremely hot conditions.

Sometimes in the ritual displays, the pair would fly vertically at high-speed until they almost stalled before peeling off .

“Once you have tasted flight, you will forever walk the earth with your eyes turned skyward, for there you have been, and there you will always long to return.”
― Leonardo da Vinci

This unusual bird seems to prefer large rivers and lakes with expansive, exposed sandbars and islands which they use for roosting and breeding. The African Skimmer is a partial intra-African breeding migrant. It arrives in southern Africa when the water level of rivers starts falling in the period from around mid-year, especially along the Chobe and Zambezi rivers. This is when the river’s sand bank become exposed again.They move north  after breeding, when rivers start rising again from in the new year.

The truly remarkable aspects of a Skimmer are its bill and method of fishing. Skimmers use their “half-wing flap” method to fly very close to the water’s surface. They lower their bottom mandible into the water while flying and the blade-like foremost part of its lower mandible cuts through the water. Its lower mandible is highly sensitive and snaps shut on any fish that is not quick enough to get away.

African Skimmers are usually seen hunting over calm waters because that they fly so close to the water surface. They feed mostly at dawn and dusk when the water surface is usually calmer.Although the African Skimmer is active throughout the day, it is largely crepuscular (active in the dawn and dusk) and even nocturnal. Its good nocturnal vision and use of touch to catch fish enables its hunting success in low light and darkness.

Skimmers do hunt in open water but are more often found hunting along the edge of reed beds and along rivulets where the water surface is calmer. 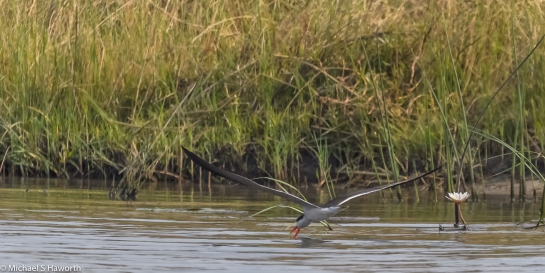 Skimmers hunt in the late afternoon, and often at night to avoid competition with other fish hunters. They will, however, hunt throughout the day to make up for the demand when feeding chicks. It takes about three months for the chick’s lower mandible to grow long enough for fishing, during which time they are reliant on their parents for food. Food is caught almost exclusively by skimming the water in flight with mouth open and lower mandible submerged.

What is unremarkable about this method of fishing is that the probability of the Skimmer hitting a log or a crocodile or something solid is quite good, yet they survive. The reason is that when their lower mandible strikes something, their head recoils absorbing the impact as their head and bill folds under their body.

Skimmers are social birds, nesting in colonies, but they usually forage alone and sometimes in small group. Skimmer’s nest on sand banks and are highly protective parents. They have a number of threats which range from egg raiding Marsh Harriers, to Water Monitors and even Herons and Marabou Storks. Skimmers take no chances, anything venturing close to their nest will be attacked from Elephant and Buffalo to innocent Blacksmith Lapwings who have to duck to avoid the Skimmer’s attentions.

We found many African Skimmers up at Kalizo, on the Caprivi strip in Namibia. The sand banks were ideal breeding grounds for these inter-African migrants.

“In every man’s heart there is a secret nerve that answers to the vibration of beauty.”
– Christopher Darlington Morley 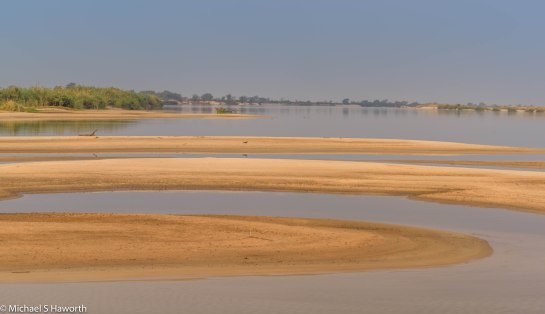 Skimmers are monogamous, nesting either solitary or in a small colonies, and sometimes along with other birds such as Collared Pratincoles, Pied Avocets and White-fronted Plovers.

The nesting parents, with eggs and chicks, were attentive and wary guards.

The nest is probably built by both sexes, consists of a simple relatively deep scrape in the ground. The nest is usually selected from multiple scrapes and is typically located  close to the water level on a riverine sandbar to keep the nest cool in the very high temperatures. The temperature averaged 44 degrees centigrade at midday and in the afternoons, when we were there.

The egg-laying season is mainly from August-October and usually  two to four eggs are laid, though I only ever saw one egg in the nests we found. Both parents take turns to incubate the eggs for about 20-22 days.

The eggs are cryptically camouflaged so we had to be very careful when venturing on to the sandbank to photograph them and the chicks. Needless to say the parents attacked us. Unlike Lapwings, which dive bomb you, Skimmers are skilled fliers and fly horizontally straight at you and veer off to the side at the last second.

At times when we were on the sandbank photographing the chicks the parents flew to an adjacent sand bank and pretended to be injured trying to lure us away from their chicks, much the same way Lapwings and some ducks do.

The chicks were well camouflaged and lay dead still. Certainly any predator flying past would not see these chicks from above as they blended in so well with the surrounding sand.

In the evenings at sunset, we would often see the Skimmers flying in pairs over golden, star-spangled waters.

Hopefully, in some small way, I have given you a sense of the wonder and privilege we feel when watching and being able to photograph these special cameos of wildlife.

“Advice from the river:

Go with the flow, immerse yourself in nature,

Slowdown and meander, go around obstacles,

Be thoughtful of those downstream,

The beauty is in the journey.“

4 thoughts on “Rynchops skimming the Chobe and Zambezi”