I was looking through some images from a previous trip to Chobe. One of the special sightings you are quite likely to see are Sable Antelope. These are, for me, the most magnificent antelope in Africa.

“It is my intention to present – through the medium of photography – intuitive observations of the natural world which may have meaning to the spectators.”
–Ansel Adams

Sable belong to the Hippotragini tribe, according to Trevor Carnaby’s “The Antelope of Africa”, the horse like antelope. They certainly look horse-like with their manes. This group includes the Sable, Roan, Gemsbok, Oryx and Addax.

According to notes from F.C.Selous in 1899, Sable were plentiful in the whole of South-East Africa at that time. Today you consider yourself privileged to see one in the wild, as they are rare.

This is a herd of young Sable. You can tell by the brownish colouring and and the horns are partially curved.

The older animals are either very dark brown or jet black. The females have shorter, more slender horns which do not curve back as much as the males. The males can have magnificent backward curving horns which can grow as long as 120 centimetres.

The Sable are usually quite skittish when coming down to the river. They do not linger. They drink and move off quickly.

Sable, like all the animals, are wary of the crocodiles lurking in the water and there are some massive Nile Crocodiles in the Chobe river.

“Your photography is a record of your living, for anyone who really sees.”
–Paul Strand 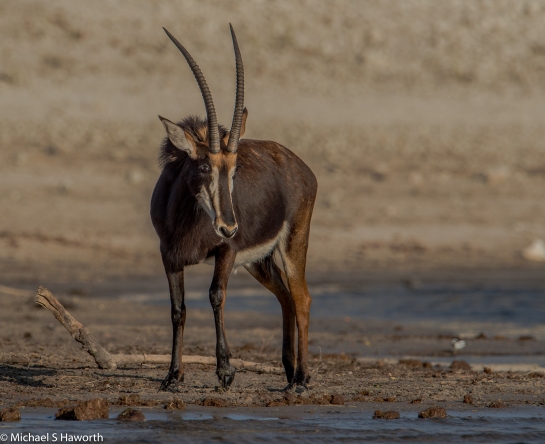 Usually the Sable will drink of small pools of water just away from the water’s edge, for fear of surprises from Crocodiles. 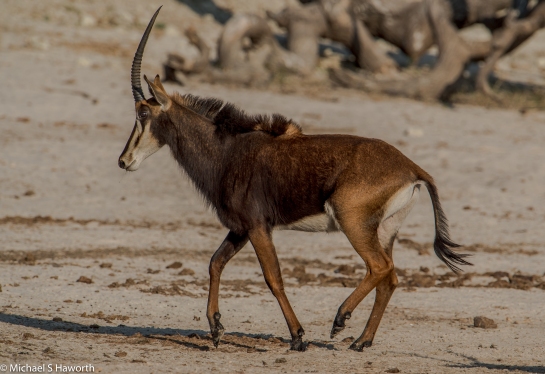 The Sable herds are expanding in South Africa mainly on game farms and conservancies. The African Sable population is estimated to be over 70,000, though wars, politics and game fences have badly affected the population in the last thirty years.

Sable need to drink daily so there is a reasonable chance of seeing this antelope in the morning down at the river. 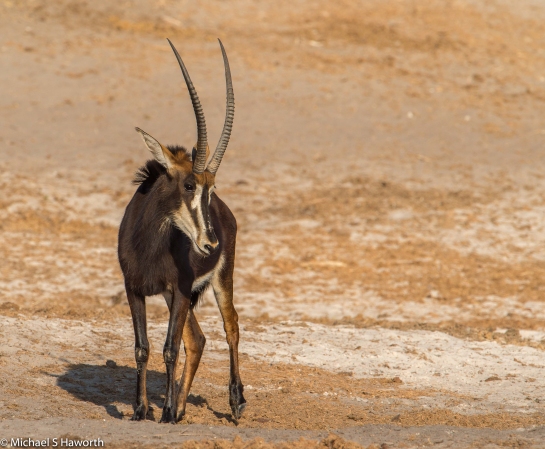 “A photograph is like a recipe memory the finished dish.”
– Carrie Latet

An older Sable and you can see the colour becomes black and takes on that groomed glossy sheen. This was a lone thirsty female.

Sable are a savannah woodland species, mainly grazers of the higher grasses but will also browse if there is too little grass or the quality of the grass is poor.

The distinct white markings on the face with the patch in front of the eyes separated from the white patch from the muzzle along the jaw by a black stripe.

I am really hoping to get more images of these magnificent antelope during my next trip to Chobe in October. I have included a video link to Youtube of Lions attacking a Sable along what looks to be the Chobe river. Don’t focus on the quality of the video or its title which must be wrong. The video shows how fast these antelope are and how dangerous Sable can be with the backward swipe of their horns.

I can remember John Condy telling me as a child that as part of a wildlife veterinary research project in Zimbabwe they had darted a Sable Antelope and it was sitting on all fours as the sedation drugs took effect. To be sure the drug had sedated the animal enough to approach it they threw a stone at it. The Sable, even in its sedated state, batted the stone away with its horn. That is how accurate they can be with their horns. A Lion needs to be extra careful with these antelope, they are fighters and are known to impale their attackers.

Sable are generally smaller than Roan Antelope and I don’t think you find Roan in northern Botswana along the Chobe. With luck I will have better images to show you in the next few weeks.

“I think life is too short not to be doing something which you really believe in.”
– Steve McCurry