This is the fourth post from my trip to Etosha with CNP in May 2015.

“Please be a traveler, not a tourist. Try new things, meet new people, and look beyond what’s right in front of you. Those are the keys to understanding this amazing world we live in.”

Etosha is the one park where I have seen not only the most Giraffe but also the largest gatherings of Giraffe at any one time. There are nine sub species of Giraffe which are identified primarily by their coat pattern and geography. The Angolan Giraffe is found in Namibia but unfortunately is not found in Angola anymore (http://www.giraffeconservation.org).

A tower of Giraffe at the Chudob waterhole.

Bull Giraffe can be identified by their size and obvious male body parts but also by the hair which has been worn off the top of their ossicones, probably during fighting. Ossicones are derived from ossified cartilage unlike antlers which are derived from bone. Ossifications on the head of male giraffe add weight, which often increases with age enabling a bull to deliver heavier blows during sparring contests. In older males a second horn grows behind the main ossicone but never fully develops. As male giraffes age, they can develop up to three of large calcified protrusions, two in the rear of the skull and one in the forehead region.

When young Giraffe come down to drink there is likely to be some action. Their youthful exuberance usually overflows. It looks like this young Giraffe’s tongue got left behind in the turn. 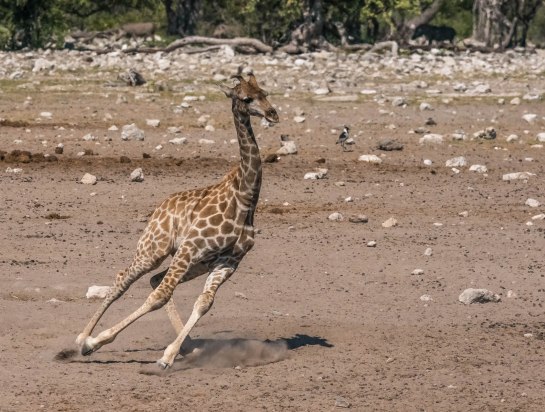 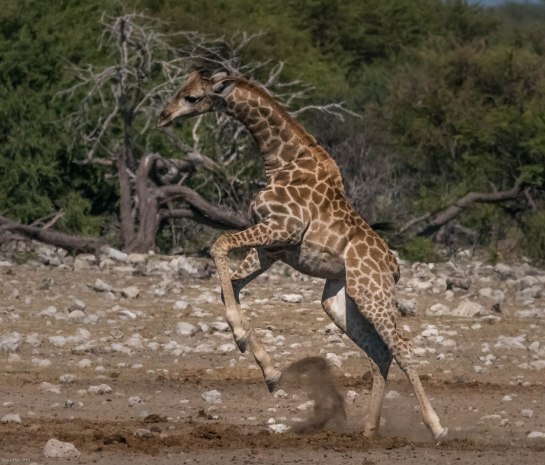 The legs of a adult giraffe can be two metres long but almost half of this is actually the foot. The joint that functions as a knee is anatomically equivalent to a wrist or ankle. The giraffe balances on the tips of its hooves, but to support its weight these hooves can be 30 centimetres across.

Part of the young Giraffe’s tap dance routine. The older Giraffe also feel the need to dance at times. 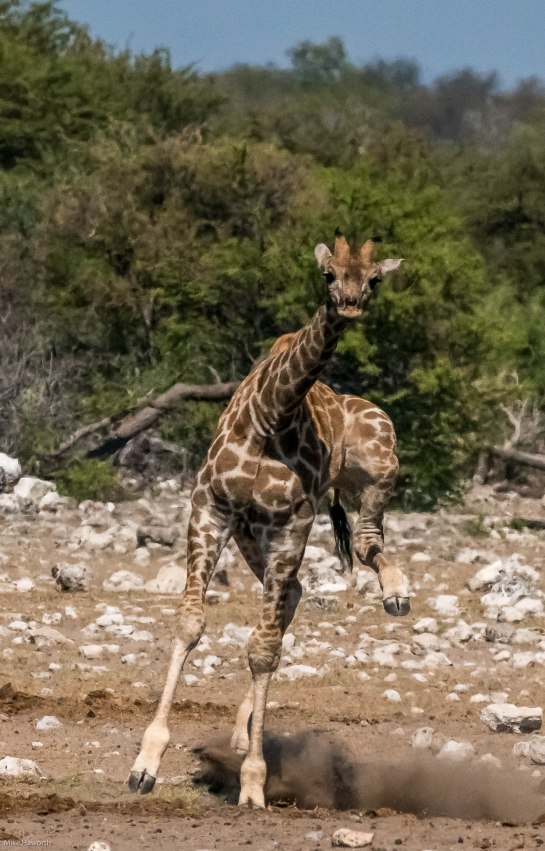 Although this young Giraffe is just having fun and frolicking, the adult Giraffe also thump their front hooves on the ground in what seems a sign of dominance, especially around other species.

Giraffes have incredible tongues. The tongue can be 45 to 50 centimetres long. As you can see it is prehensile and can rub an itchy nose. The Giraffe uses its prehensile tongue to strip leaves off tree branches. Their tongues seem to be able to cope with the thorns of Acacia trees. Giraffes are herbivores feeding mainly on the tops and sides of trees and work in a complementary way with other browsers such as Kudu.

Male Giraffes stay close to a female in estrus frequently smelling her urine with a typical flehmen response, where they curl up their upper lip to allow the scent to pass over the Jacobson’s organ in the roof of the mouth. You can see the male is much larger than the female. 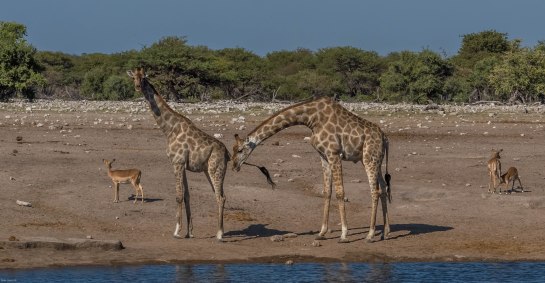 “One’s destination is never a place, but a new way of seeing things.”

We watched sexual pairs doing their extended slow lover’s dance. We also watched young males sparring and testing themselves against each other.

There was much Giraffe activity around the Chudob waterhole. These two young males were sparring, nothing serious as they were not hitting each other hard. 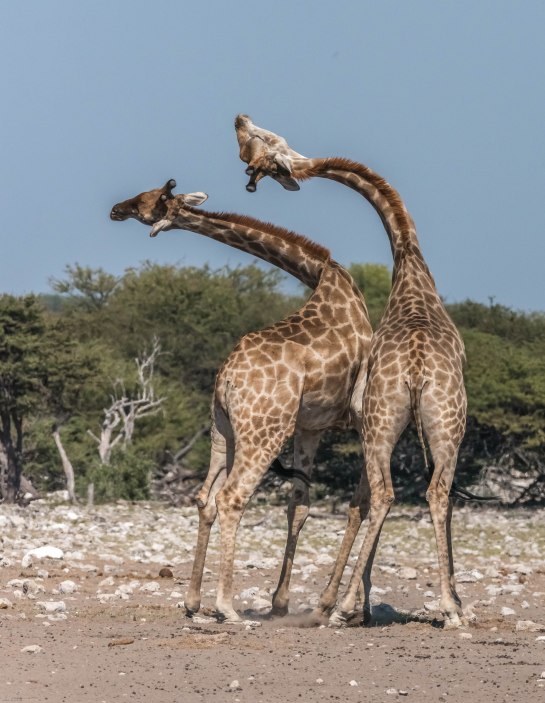 The flexibility in the Giraffe’s neck is surprising. The Giraffe has the same number of vertebrae in its neck as a human, it is just that the vertebra are much longer.

The hair has been worn off the top of the ossicones on both of these young Giraffe indicating they are most likely males.

Being so tall, Giraffes cast wonderful reflections in the blue water of the Chudob waterhole. 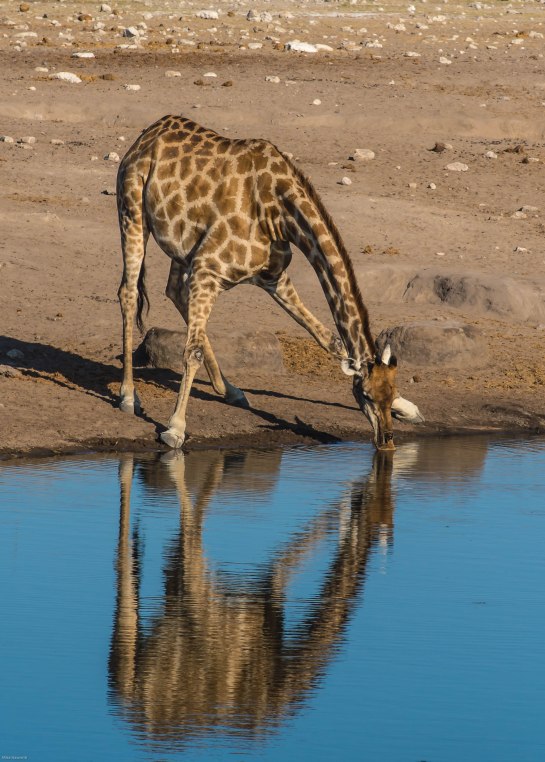 A young Giraffe at full gallop and completely airborne.

Some black and white treatment emphasises the shape of the neck and head of these two sparring Giraffe.

One thought on “Giraffe gatherings”