This is the second post from my recent trip to the Masai Mara with CNP.

“Whatever you are physically…male or female, strong or weak, ill or healthy–all those things matter less than what your heart contains. If you have the soul of a warrior, you are a warrior. All those other things, they are the glass that contains the lamp, but you are the light inside.”
― Cassandra Clare

We drove onto the Kitchwa Tembo conservancy, which is about 10 square kilometres and stretches out in front of the Kitchwa Tembo tented camp for about three kilometres down to the Mara river on its eastern boundary. This conservancy is adjacent to the north-eastern boundary of the Masai Mara national park. One of the key advantages of operating on the conservancy is that we were allowed to drive off-road so could get the sun behind us and get manoeuver to achieve better perspectives.

We were bedeviled by the weather. Each night it would rain hard and the mornings would be heavily overcast with a mist which looked like a smoke haze until midday. The haze eased but did not go away in the afternoons. We were told by our ranger that this was atypical weather. Photographers have to learn to work with the weather rather than against it. There was one advantage in that the haze reduced the contrast in the afternoons but it did remove some of the pin sharpness in the images despite high shutter speeds.

We had heard that half of the Marsh pride had crossed onto the west side of the Mara river. The ruling coalition of four big male lions, “Scar” and his three brothers had followed half the pride, a group comprising 11 Lionesses and cubs. After finding the Lionesses and cubs on the conservancy near the airstrip the afternoon we arrived and went out looking for them late this particular morning once there was enough light.

We found the pride of Lionesses and cubs which we had seen the day before but they were not looking in good shape and appeared listless. The sub-adults and cubs were very thin and the cubs did not play at all. At the very northern part of the conservancy, we found one of the four coalition males. He was a massive specimen and emerged from the treeline at the edge of the open grassland.

There was very little going on and the male was just surveying the scene when his attention suddenly fixed on something in the distant grassland. He had spotted one of the Lionesses who had caught a Warthog piglet. Immediately he got up and began running about 400 metres to her.

The male ran passed a small herd of Buffalo. The next images shows the scene in front of the Kitchwa Tembo camp.

Warthog families would emerge from the tree line to forage on the open grassland area of the conservancy. Once in the open they were vulnerable to predation by Lion. Although the grass was low on the conservancy the Warthogs could often not see the Lions because of the undulations and large tufts of grass and there were distractions from the many animals on the conservancy. The next images show the initial score – Lions one and Warthog family minus one. The Lioness started to eat the piglet as fast as she could, probably knowing the male would appropriate her prize.

The piglet was just enough for one Lion so the Lioness tried to get away to eat in peace.

Once the male got to the Lioness she tried to run away with her kill but there was no negotiation the male just piled in a took it from her.

The Lions’ antics had not gone unnoticed by the Buffalo bulls. The male Lion had to pick up his stolen goods and retreat in the face of an aggressive onslaught from the Buffalo.

All the attention had brought the second male out of the treeline. He did not try to knuckle in. Both males looked in good shape in stark contrast to the thin sub-adults and cubs who were at the bottom of the feeding hierarchy.

“Time destroys the speculation of men, but it confirms the judgement of nature.”
— Marcus Tullius Cicero

The next image is of one of the males exhibiting a flehmen response.  The male is curling back his upper lip to unblock glands in the nasal passage.  This grimace is the process of opening his mouth to allow the scent to pass over his Jacobson’s organ. This behavior is performed over a site or substance of particular interest. This might have been where a fight had taken place or competition was killed or where a female urinated. The scent left at the scene carries pheromones. The male inhales the scent which transfers of pheromones and other scents into the vomeronasal organ also called the Jacobson’s organ, located above the roof of the mouth via a duct which exits just behind the front teeth of the animal. The grimace helps to unblock the glands in the nasal passage, allowing him to take in the full scent. Flehmen is performed by a wide range of mammals ranging from the cats to herbivores.

When one sees how male Lions kill cubs that are not their own, it is remarkable to see the tolerance they have for their own cubs.

The males eventually got together. The next image disguises the deadliness and power of these males. This relaxed position can change to full combat mode in an instant.

Comrades in defence but independent seekers of females.

A close-up of one of the four males in “Scar’s” coalition – a magnificent big cat! 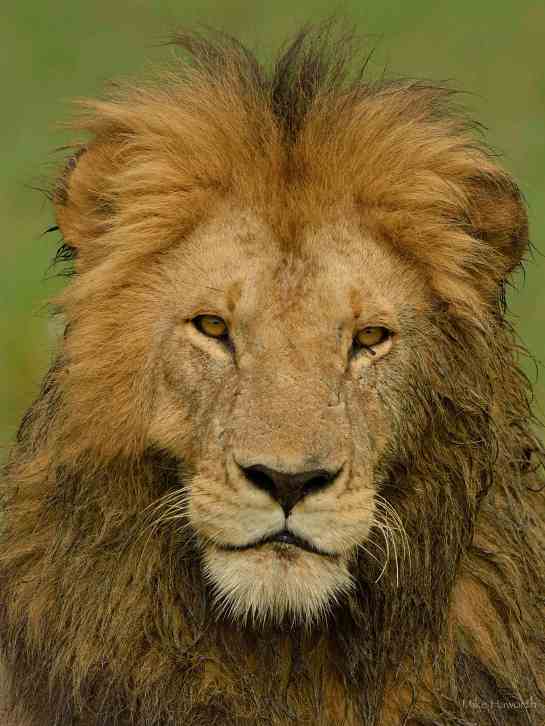 Before long this big male got up and started to wander down to where the Lionesses had begun another hunt.

When close to big male Lion one’s heart does skip a beat to two. We never got to see all four together. This must be an almost invincible coalition at this point.

Interesting how the change in perspective alters the apparent shape of his face. 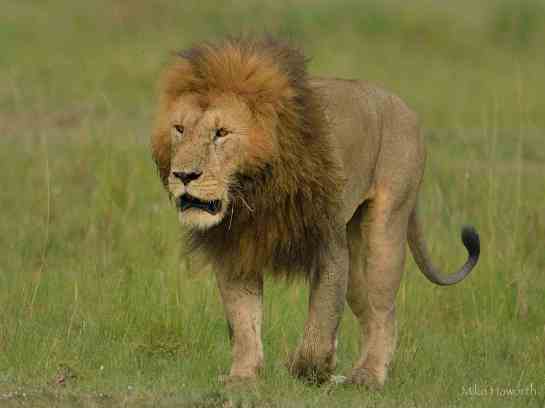 “There is a way that nature speaks, that land speaks. Most of the time we are simply not patient enough, quiet enough, to pay attention to the story.”

The Lionesses’ hunting tactics were fascinating to watch. There was no chance of a surprise attack in the open so they started a “divide and conquer” approach to open up the herd. Lionesses would take turns to draw different Buffalo out of the herd. Slowly but surely the Lionesses managed to open up the herd enough for two Lionesses to separate one Buffalo. The Lionesses quickly took down the separated Buffalo among some small bushes in the conservancy grassland. The bellowing of the fallen Buffalo was a call for help. This came quickly in the form of an intimidating wall of agitated Buffalo.

It did not take long before the Buffalo had forced the Lionesses off their catch. What was surprising was the two large males did nothing to help the Lionesses at a time when a large meal for the pride was desperately needed to feed the younger members of the pride. Three Buffalo escorted their injured herd member away from the scene while the remaining Buffalo chased the Lionesses in the opposite direction.

After the one male had stolen a piglet from one of his Lionesses and the females had not managed to kill the downed Buffalo. The two big males decided to look for a little more peace and quiet. 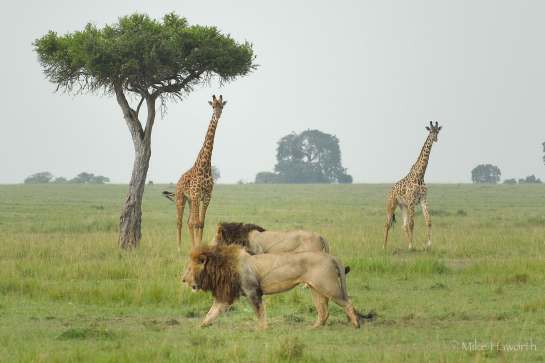 “Nature is man’s teacher. She unfolds her treasures to his search, unseals his eye, illumes his mind, and purifies his heart; an influence breathes from all the sights and sounds of her existence.”

7 thoughts on “Lions working the conservancy”