I was fortunate enough to be invited by long-standing friends Bill and Judy Pierce, to join them at their bush retreat at Eagle’s Rock Estate. It is so-called because of the pair of Black Eagle’s which nest and hunt along the cliffs in the gorge through which the Olifants river flows on to the Loskop dam. This gorge runs along the north and eastern boundary of the estate. Bill and Judy invited me knowing I really wanted to try to get some images of the Black Eagles and their latest chick before it fledged and left the nest.

It was late August when I visited Eagle’s Rock Estate, so the sun rose around 6h30 in the morning and it was chilly. The Black Eagle’s nest was on an western rock face of the gorge. This meant it was only possible to photograph the chick until around 11h00 before there was too much shadow.

I readily jumped at the opportunity to try to photograph these Black Eagles. I say try because it turned out to be considerably more difficult than I had envisaged. Firstly, I had my tripod sitting on a flattish rock at the edge of the cliff. I had to be mindful not to walk off the edge in my excitement. Believe me when the eagles fly passed, it is exciting – these are impressive raptors both for their size but also their dramatic colouring. It was also fairly windy at the edge of the cliff a, which is why the eagle’s chose to nest there – the constant updraft.

Unfortunately there was no safe way to scale down the face of the cliff and get close to the nest, especially with heavy camera kit, so I had to settle for a reasonable view which was quite far away.

The sandstone cliffs on the west side of the gorge were spectacular. They are roughly weathered by the wind and rain creating dramatic texture and colour. The warm light of the rising morning sun cast a beautiful pinkish light on the sandstone.

It was not always easy to get a clear shot of the Black Eagles flying passed. Firstly they are fast and secondly the shape of the cliff face only allowed a partial view. I apologise in advance for the quality of the images but this trip turned out to be more about the birding and incredible sightings and less about the quality of the photography because of the distance from the subjects and direction of light. Nevertheless, I thought the images were interesting enough to write a post about them.

“The most amazing lesson in aerodynamics I ever had was the day I climbed a thermal in a glider at the same time as an eagle. I witnessed, close up, effortlessness and lightness combined with strength, precision and determination.”

The two mornings of the weekend I spent on the cliff edge trying to photograph these majestic creatures, the adults spent very little time with the chick, perhaps five minutes in total. The nest was substantial but the chick was unprotected from the cold morning breeze. The chick’s only option was to huddle low down in the cup of the nest for a modicum of protection from the wind 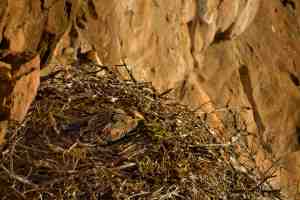 The chick called often but to no avail. When it got to hot, the chick would hide around the side of one of the rocks at the back of the nest. Although substantial in size, the chick’s feathers were still forming and it looked very gangly and awkward. A far cry from the majestic, effortless, aerodynamic parents.

The Black Eagle’s nest  can be seen about a third of the way up the next image just to the left of centre. It was a long distance away, not ideal but I was not going to risk ending my photographic passion in a heap at the bottom of the cliff. 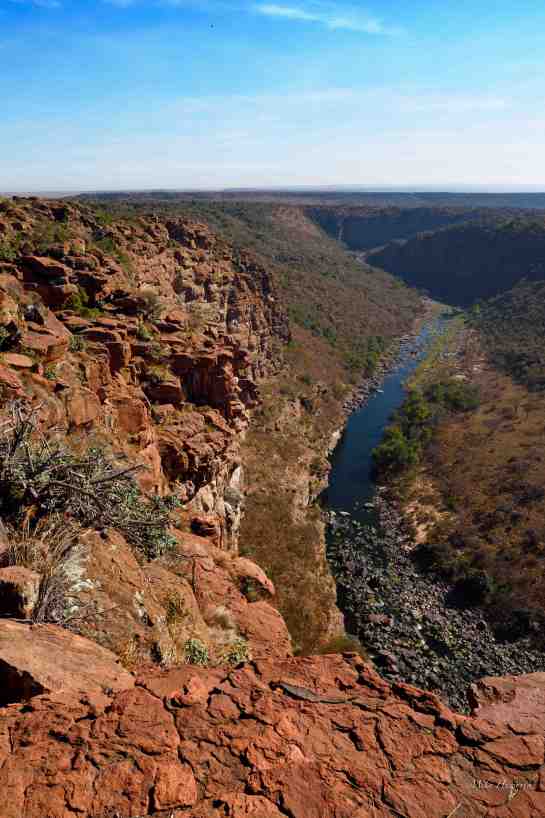 You had to be quick. The female did not stay with the chick long. The first time was to bring a small branch with green leaves and she only stayed less than a minute. The second time was to bring what looked like the hind quarters of a springhare. The second time she stayed only a few minutes until the chick was feeding on the food she had brought. 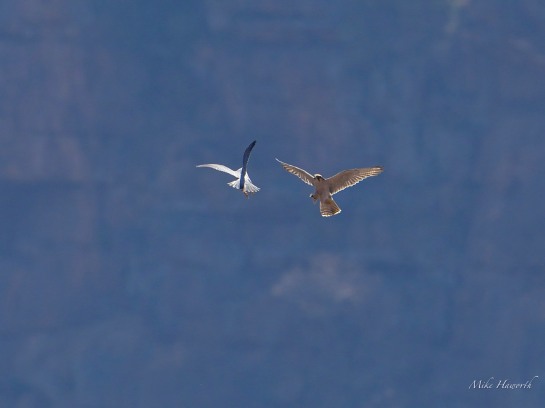 “May your spirit soar throughout the vast cathedral of your being.

May your mind whirl joyful cartwheels of creativity.

May your heart sing sweet lullabies of timelessness.”

The Peregrine is noticeably smaller and darker than the Lanner. I had never seen a Lanner flying upside down before. 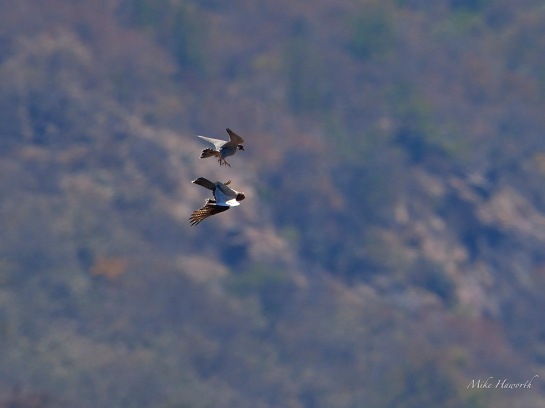 While the female Black Eagle was briefly with her chick, the male stood guard on a jutting rock. This Lanner Falcon was not impressed by the Black sentinel. I can only assume the daring fly by was due to the Lanners having a nest close by. 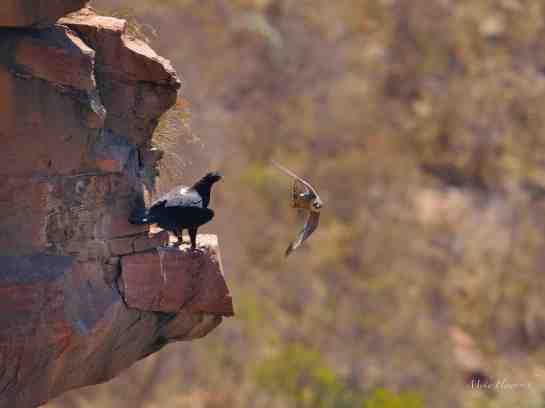 The male and female Black Eagle hunt cooperatively as do Golden Eagles. The pair bonding looked to be strong from the small time I spent in “Black watch”.

I found this article in the April-May 2012 issue of the erstwhile excellent Africa Birds and Birding magazine which I thought had particular clarity about nature and conservation.

“What has Nature to us?

Nature gives us understanding of ourselves, of our nation, of our species. Poets through the ages have placed humans in the context of other species, and from this, we draw a crucial understanding of the way we are and the life we lead.

Nature gives us a sense of human achievements, of the control that we have over the planet and over our own destiny – a sense of almost limitless power. And with that, it adds a sense of humility: the realisation that we cannot create a grassland or rain forest, only destroy one.

Nature tells us that we are lonely in our human condition, but that we are not alone, and are one of many. It tells us to feel both pride and shame, and gives us perspective and wonder.

Nature is the way that the planet works and it gave us our existence in the first place. Life – ours and that of every other living entity on the planet – depends on the great and complex web of life that we call biodiversity.”