In this post, I want to share a few images of Black and White Rhino which I have been privileged enough to see. I will show you what free roaming wild Rhinos look like and then finish the post with some information on the current poaching crisis.

It is the task of our time and in our generation to hand down undiminished to those who come after us, as was handed down to us by those who went before, the natural wealth and beauty which is ours

There are five Rhinos species alive today. Two are in Africa, the White and Black Rhinos, and three in Asia, the Greater One-horned, Javan and Sumatran. I will refer to the African rhino species in this post.

The word Rhinoceros comes from two Greek words – rhino (nose) and ceros (horn). There is no difference in colour between the Black and White Rhino but there are many other differences. The White Rhino’s name is thought to have come from the Afrikaans word ‘wyd’ meaning wide when describing its mouth. Both species are essentially gray in colour but the numerous mud baths do create some interesting colorations.

Paleontologists believe that at least 30 genera and 60 different species of Rhino originally existed in North America, Europe, Asia and Africa. The extinct ‘giraffe -rhinoceros’ was the largest mammal that ever lived reaching 28 feet at head height and may have weighed up to 20 tons. The smallest was the size of a dog. The important element is that they have lived on this planet considerably longer as a species than we have!!!!

The White Rhino or Square-lipped Rhino has a wide square lip and grazes on ground vegetation, mostly grass. This is the larger of the two African Rhino species and can weigh up to 3 tonnes and stand up to 1.8m at the shoulder. there are two types of White Rhino, the Northern and Southern, but the Northern is effectively extinct in the wild, with a few in captivity.

This female White Rhino and her calf have just finished their mud bath. These Rhinos are pachyderms (thick skinned) and their skin can be as thick as 1.5 cm but their hides are sensitive to insect bites and sunburn, so the application of mud provides a degree of protection.

White Rhinos tend to be the more passive of the two African Rhinos but make no mistake these are powerful and dangerous animals. I watched a video of a White Rhino trans-location where the agitated animal instead of running off into the bush when it was let out of its container turned on a ten ton truck lifting its left back wheel off the ground!!!

When two male White Rhinos decide to have a tangle, it is always an awe-inspiring sight. The previous image shows an older male teaching a youngster some manners. There was a lot of huffing and puffing and much dust but the lesson was learned.

Believe it or not , Rhinos’ closest relatives are other perissodactyls, otherwise known as odd-toed ungulates, such as tapiers, horses and zebras.

Fortunately, neither of these White Rhino males were hurt.

This is the smaller of the two African Rhino species. It stands around 1.5m to 1.6m at the shoulder and is lighter at around 1000kgs to 1350kgs. What it lacks in weight, it makes up for it aggression and attitude.

The Black Rhino has a hook-like upper lip which is prehensile and used to browse on bushes and low hanging branches for food. My first experience of a Black Rhino came when old family friends, the Condy’s, who at the time lived down the valley in a suburb of Harare, were looking after a Black Rhino calf for about six months. Dr John Condy was involved in Operation Noah, an incredible effort made by many brave and hardy souls tried to save as many animals as possible which were stranded on islands as the waters filling Lake Kariba rose in the early 1960s. In the rescue process a female Black Rhino was darted with a tranquilizer to sedate her in order to move her and her calf to higher, safe, dry land. Unfortunately, once darted she bolted for the water and the rescue team could not lift her out of the water, so she drowned. This left a very small Black Rhino calf, which was subsequently named ‘Rupert’ when he was brought back to Harare to be hand reared by the Condy family. Rupert was probably named after Rupert Fothergill, a key figure in Rhino capture in the early 1960s in Zimbabwe as it now called. A documentary of Rupert the Rhino has recently been made so I will leave you to see what was a fascinating story. 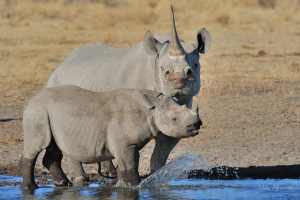 A Rhino’s gestation period is around 15 to 16 months but the calf will stay with its mother for two to three years. Usually the father has nothing to do with raising the calf.  This is why this next image of a male, female and calf Black Rhino all interacting together was, I thought, an unusual sighting.

In the two previous images, initially the female chased the male away but later they were very gentle with each other. In the wildlife documentary entitled ‘Saba and the Rhino’s Secret’, the idea that Black Rhino are mostly solitary is shown to be incorrect. In this documentary numerous ( 12, I think ) congregated in around a waterhole at night in Namibia. The reason for the congregation was for more than water.

Black Rhinos appear to run on their toes and can reach speeds of 35kms per hour which is why you do not want to be caught in the open away from a readily climbable tree. Fortunately, I have never been chased by a Black Rhino other than ‘Rupert’.

Both African Rhino species have poor eyesight but compensate with acute hearing and smell senses.

This Black Rhino heard something and whirled around to get a better sense of where it was.

Once a Black Rhino locks onto your position and starts to approach you ( even when you are on a vehicle) it can be intimidating. Rupert Fothergill who took charge of Rhino capture in Zimbabwe, in the early 1960s, was gored by a Black Rhino in 1965 when it charged his vehicle and its horn went straight through the metal door into his leg.

Rhino use an intricate system of breathing exhalations, grunts and squawks to communicate with each other.

The sun, the moon and the stars would have disappeared long ago had they happened to be within the reach of predatory human hands.

Rhinos have lived on earth for 50 million years and in one century ‘human locusts’ have managed to push them to the point of extinction. Without humans to short-circuit their lives Rhinos can live to 45 years and beyond.  As Dereck Joubert chief executive of Great Plain Conservation notes “there is a battle for Africa’s wildlife raging as we speak, with Rhinos being poached at a rate of one every nine hours with the official number killed in South Africa alone at 1004 in 2013. The unofficial number is probably well over 1000 because we simply do not find them all”.

This Black Rhino bull was found wandering Zimbabwe’s Save Valley Conservancy after poachers shot it several times and hacked off both horns. Veterinarians euthanized the animal because its shattered shoulder could no longer support its weight. Photograph by Brent Stirton/National Geographic

We do not inherit the land from our ancestors, we borrow it from our children

Rhinos have been brought to the edge of extinction because of the human appetite for their distinctive horns.They have been prized for centuries for their translucent colour when carved and supposed healing properties. The ornamental use of the horn by Muslims and Chinese dates back centuries. 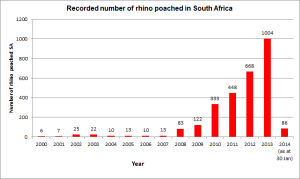 Far more pervasive is the use of Rhino horn in traditional medicine systems in many Asian countries. Unlike horns of most animals, the Rhino’s horn does not have a bony core covered by a relatively thin layer of Keratin, Rhino horns are Keratin all the way through. The precise composition of the keratin will vary depending on the Rhino’s diet and geographic location which helps the forensics. Rhino horn is similar in structure to  horses hooves, turtle beaks and the beaks of a number of species of bird. The centre of the horn has dense mineral deposit is of calcium and melanin which protect the core from being degraded by ultra-violet radiation from the sun. Because the outer part is softer it is worn away over time and is effectively sharpened.

Defenders of the short-sighted men who in their greed and selfishness will, if permitted, rob our country of half its charm by their reckless extermination of all useful and beautiful wild things sometimes seek to champion them by saying the “the game belongs to the people.” So it does; and not merely to the people now alive, but to the unborn people. The “greatest good for the greatest number” applies to the number within the womb of time, compared to which those now alive form but an insignificant fraction. Our duty to the whole, including the unborn generations, bids us restrain an unprincipled present-day minority from wasting the heritage of these unborn generations. The movement for the conservation of wild life and the larger movement for the conservation of all our natural resources are essentially democratic in spirit, purpose, and method.

I hope you have found this an interesting post and that the destruction of these ancient beings stirs repulse in you to the point where you want to help stop those ‘human locusts’ from stealing our natural treasures. If we don’t, in a few years we will only be able to show our children pictures of the Rhinos. When the Rhinos are gone they will move onto the Elephant and the Lion and leopard – and so the plague goes!!!!!

So what sort of custodians do our generation want to be remembered for??!!!

“A man only begins to be a man when he ceases to whine and revile, and commences to search for the hidden justice which regulates his life. And he adapts his mind to that regulating factor, he ceases to accuse others as the cause of his condition, and builds himself up in strong and noble thoughts; ceases to kick against circumstances, but begins to use them as aids to his more rapid progress, and as a means of the hidden powers and possibilities within himself.”
― James Allen, As a Man Thinketh

Seek to understand nature, marvel at its interconnectedness and then let it be.

One thought on “Rhinos falling”