We were privileged to see not only one, but three rare and critically endangered black rhinos, the east African sub-species. If that was not enough, the adults were mating –  much to the confusion of the sub-adult.

“No one in the world needs a rhino horn, but a rhino” ~ Rachel Carson

According to the Rhino Resource Centre, the African Rhino Specialist Group recommends the distinction of four subspecies which ignores the recently extinct subspecies.

The taxonomy of the subspecies of the black rhino remains unresolved and needs further study.

“The earth was made for all beings not just human beings!“

As we were driving around on our last morning, our guide Akatch pointed out black rhinos in the distance. It was still early, before 7h00. What makes this sighting more unusual is that black rhinos tend to be much more solitary than their white rhino cousins.

With great excitement we drove closer. We found an amorous bull with a receptive female black rhino and her sub-adult youngster. The youngster was complicating the affair. As the female started to walk forward the bull had to try to keep up on his back legs.

A black rhino bulls can weigh up to 1.2 tonnes with the female being around two thirds smaller. This species is noticeably smaller than the White Rhino. It addition it has a very different mouth structure. The black rhino has a pointed prehensile top lip which it uses to strip vegetation off trees and bushes, while the white rhino has a square wide lips which it uses effectively to graze on the grass. The posture of the two species of rhino is also different with the  black rhino usually holding its head high. The black rhino also has rounded more trumpet shaped ears. Both African rhino species have poor eye sight but acute hearing and smelling senses.

During courtship behaviour, males butt females with their horns. Mating can be quite a violent and protracted event.

Usually, the male would follow the female around and place his head on her hind quarters signalling that he wanted to mount her. She would then stop and he would place  his front legs on her back.

This youngster kept approaching its mother for comfort and clearly did not know what was going on….

I was amazed to see this female black rhino cope with this large bull placing a considerable weight on her back. She did not appear to even flinch. This was one tough female!

“There’s no point bleating about the future of pandas, polar bears and tigers when we’re not addressing the one single factor that’s putting more pressure on the ecosystem than any other — namely the ever-increasing size of the world’s population.” ~ Chris Packham

The whole morning was unusual and I found it strange that black rhinos, which are browsers, were in the open grasslands in the early morning. When we got back to camp later for breakfast I asked Andrew van den Broek, an &Beyond’s guide trainer based at Kichwa at that time, who has vast knowledge of the bush and animal and bird behaviour about this encounter. He indicated that the black rhino venture out into the open to browse on the small tree saplings in the grass. They retreat into the cool of the treed areas after 9h00 once the morning temperature gets too hot.

The female kept walking away and her youngster followed, so too did the amorous bull who was still very interested in her.

A mating pair can stay together for two to three days, sometimes even weeks. They mate several times a day and copulation usually lasts for about half an hour. Once fertilised , the female has a gestation period of around 16 months.

The bull caught up with the female repeatedly and placed his head on her flanks. Judging from the large scar on his right side, it looked like he had been gored sometime before.

Black rhino have two horns. The front horn is longer than the back one. According to the Save the Rhino organisation, both grow continuously from the skin at their base throughout their life.  Rhinos from different areas can have horns of different shapes ,and sizes can also vary. The shape of the horn also differs between sexes: with males tending to have thicker horns, and the females often longer and thinner ones.

The bull must have had an extremely strong neck because he would place his head on her backside and lift his front legs off the ground in an attempt to mount her.

Once up, the bull would stand firmly with his front legs on her back. Again the youngster was getting in the way. The female was ready and receptive and waited for the male to get his act together, but I guess the youngster was proving too much of a distraction.

According to the Black Rhino Husbandry website, the normal body temperature of a black rhino ranges from 34.5 oC to 37.5 oC. The pulse is 30 to 40 beats per minute, and respirations are six to twelve breaths per minute (Fowler and Miller, 2003).

The bull was so distracted by the youngster that he moved around to the female’s left side putting half of his weight on the left side of her back. The youngster eventually gave up and just lay next to its mother.

“Living wild species are like a library of books still unread. Our heedless destruction of them is akin to burning that library without ever having read its books.” ~ John Dingell 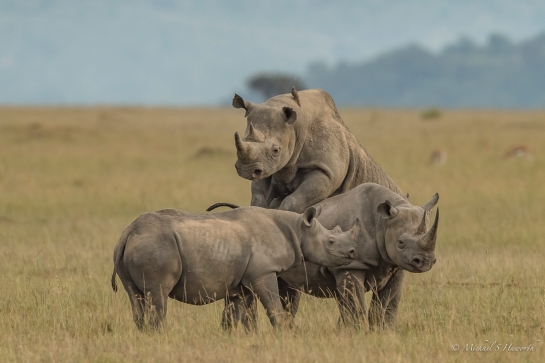 When I saw this image it really typified that a woman’s work is never done. Here she has a large bull with his front legs on her back trying to mate with her. She has her calf trying to suckle and if that was not enough, she had two red-billed oxpeckers on her face, with one up her nostril. 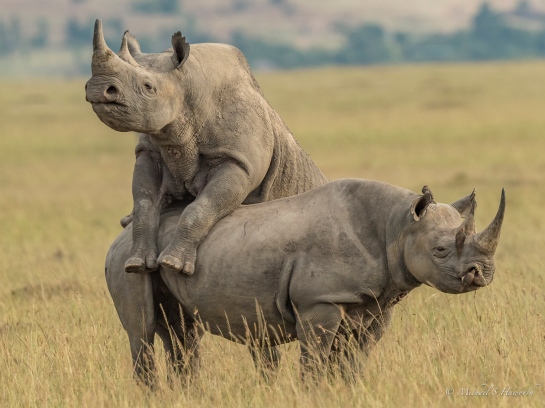 The female black rhino appeared to be in excellent condition with her horn intact – hopefully for the rest of her life.

“We take habitat away from wild animals and then kill them for invading ‘our’ space.”
~ Patrick Edwards

After a while the female crossed the road in front of us with her calf behind her, leaving the male behind. Black rhino calves stay with their mother for 2-4 years before being rejected, usually when the female is ready to calve again. 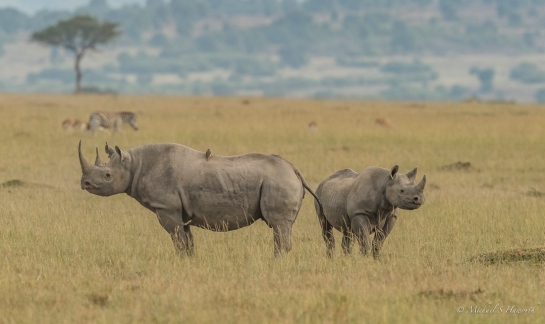 Red and yellow-billed ox-peckers are often seen moving all over the rhinos body and face. The rhinos tolerate these oxpeckers because they remove ticks and clean parasites from open wounds and sores. These birds also help the rhino by raising the alarm if there is any danger approaching.

The female black rhino and her calf eventually wandered off to the tree line where they disappeared out of sight.

According to the International Rhino Foundation, during the last century, the black rhino has suffered the most drastic decline in total numbers of all rhino species. Between 1970 and 1992, the population of this species decreased by 96%. In 1970, it was estimated that there were approximately 65,000 black rhinos in Africa – but, by 1993, there were only 2,300 surviving in the wild. The black rhino population is recovering and increasing very slowly, but the poaching threat remains great.

“If we human beings learn to see the intricacies that bind one part of a natural system to another and then to us, we will no longer argue about the importance of wilderness protection, or over the question of saving endangered species, or how human communities must base their economic futures – not on short-term exploitation – but on long-term, sustainable development. “ ~ Gaylord Nelson

There are five remaining species of rhinoceros left in existence today. The other six known species have become extinct due to various reasons, but mainly because of hunting and poaching.

“Right now, in the amazing moment that to us counts as the present, we are deciding, without quite meaning to, which evolutionary pathways will remain open and which will forever be closed. No other creature has ever managed this and it will, unfortunately, be our most enduring legacy.” ~ Elizabeth Kolbert

One thought on “Endangered in the Mara”