This is the third post from our recent trip to Mashatu. I have entitled this post “summer adventure” because we decided not to leave our vehicles at Ponte Drift and catch the Ponte across the swollen Limpopo river but rather to drive to the next crossing up stream which is Platjan. It was an easy drive along tar for most of the way, probably a similar distance to Ponte Drift. There was only an 18 kilometre stretch of gravel road to finally get to Platjan. It was an easy border crossing. The customs officials and police were friendly, which is always a good start to a trip.

”Attitude is the difference between an ordeal and an adventure”

The Limpopo crossing at Platjan is a low level causeway with no barriers. The water was flowing just under the causeway so we were allowed to cross.

Looking north from the causeway the river looked swollen and muddy due to all the recent rain.

Once in Botswana you immediately get the feeling that you are in the bush. The road from Platjan to Ponte drift was interesting. A romantic interpretation of a rough road,  tough enough to sideline the even the grader!

”Life was meant for good friends and great adventures”

The road was rough and you had to drive carefully, even in a 4×4. There were big pools of water across the road and there were some “interesting” sand patches. There were also parts that required some negotiating because the rain had washed away part of the road. That is why a 4×4 is useful and that is why we do it – fun!!! Once you get to your bush destination and are able to reflect on the inbound journey over a few beers around the fire, the angst of the journey is washed away.

Even the Purple-pod Terminalias come alive. They are colourful enough but with backlighting their purply-crimson colours are vibrant.

About 18 kilometres from Ponte Drift you get to a four way crossing, turn left to Mashatu and turn right to Soloman’s Wall. We turned right to have a look at the Mouloutse river. On the way we were struck  by how lush the bush was and were spellbound by the carpets of yellow Devil-thorn flowers. Looking into the distance on top of the Mmagwa sandstone ridge was Rhodes’s Baobab.

”You must go on adventures to find out where you truly belong.”

At Solomon’s Wall, a natural igneous dyke which has weathered over the centuries and more recently been breached by the Mouloutse river, we found the sand river with large pools of water. This is the short cut from Platjan in the winter. Crossing this time was not possible unless you had an amphibious vehicle.

Once in Mashatu we travelled on, what is affectionately called, the M1. The road can best be described as eclectic, smooth in parts, rough in parts, but lined gorgeous vistas. We stopped on the low level bridge close to Mashatu main camp where it crosses the Majale river. Up stream it was like a dam due to the debris which had built up on the upstream side of the bridge.

On the same bridge looking downstream it looked like a normal seasonal river with some big pools of water.

Once in Mashatu you leave your vehicle at the camp and are taken around the reserve in Mashatu vehicles driven by Mashatu rangers. To say that Mashatu in summertime is eclectic is an understatement. One minute you are driving through carpets of yellow flowers the next you are in a sand river looking up at two lionesses resting on a gravel bank on one of the tributaries. Each lioness had three cubs. All the cubs were around seven to eight months old and were unfazed and unhurried by life.

The game reserve looked like the Garden of Eden. It was verdant and carpeted with yellow and pink flowers. There was an abundance of game and the birdlife was prolific reinforced by the migrants from higher up Africa, Europe and Russia.

“Climb the mountains and get their good tidings. Nature’s peace will flow into you as sunshine flows into trees. The winds will blow their own freshness into you and the storms their energy, while cares will drop off like autumn leaves.”

Each evening around 18h30, weather permitting, we would drive to a lookout point from which to watch the sunset or moon-rise with a sundowner in hand. It was a daily celebration of life and abundance. The lookout point was normally a hill or ridge with a wonderful elevated view of the whole area from which to watch the wanderings of all the game below. From way down below you could hear the jackals calling and the odd “whoop” of an hyaena scout starting out on its nocturnal hunt. 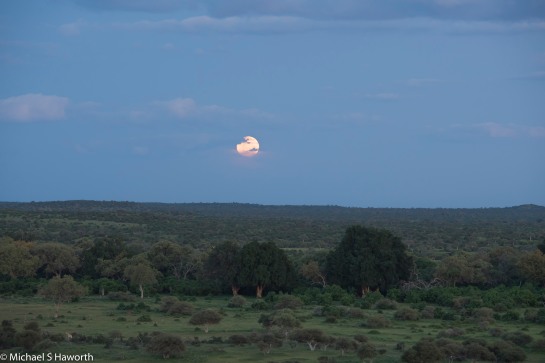 One evening on our way back to camp around 19h30 we were crossing the rock bed below the weir on the Matabole river when one of our group, George, spotted a male leopard lying in the grass with his infra-red spotlight. How he saw this leopard was a mystery as it was so well camouflaged. This large male leopard was quietly lying in the long grass right next to the river. He must have known that a lot of game comes down to drink from that section of the river. With a little patience his dinner would come to him.  The fact that George could see something in the grass in the dark was amazing. We could only confirm it was a leopard through the binoculars. In the bush you need all your faculties to see, and seeing is about perceiving shape, colour and movement. It is not only about focus and clarity.

The summer migrants were in Mashatu for the insects. This was one of many Lesser Spotted Eagles which had arrived for the insect banquet. They are highly mobile and we only saw them one afternoon and never again.

“All my life through, the new sights of Nature made me rejoice like a child.”

This next image gives you an idea of the carpet of flowers covering the plains in Mashatu. Yellow Devil Thorn flowers interspersed with Wild Spearmint (I am not sure about my flower identification).

The elephants loved the flowers and scooped them up by the trunk full. 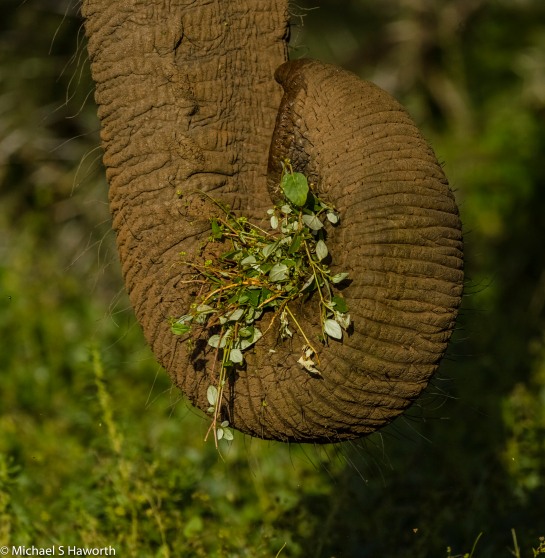 It is a remarkable sight to see a lioness lying in a bed of yellow flowers or to see a female elephant walking through  nature’s flower garden.

The giraffe were more interested the lions which were about 50 metres in front of them.

The rivers are seasonal. Recent rains had brought the rivers down in flood but the flood waters subside quickly if there is just a thundershower in the upstream catchment area. Once subsided the river is left with numerous pools of clean water, which the animals and birds seem to love. 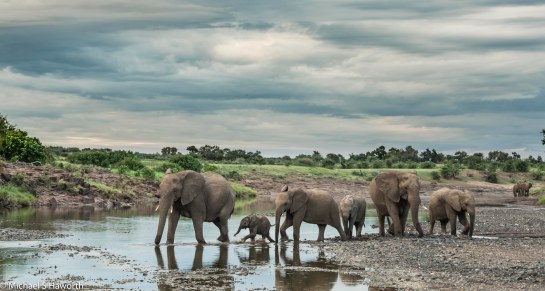 The elephants really enjoy their summer pools. While we were watching the breeding herd in the previous image, out of the tree line on the far side of the riverbed came another herd of elephants. We watched quietly on the vehicle in the riverbed and  they walked a few metres in front of us. They then walked right past us, unfazed.

This was a Large-flowered Tephrosia on an rock outcrop highlighted by the late afternoon sunrays.

“Forget not that the earth delights to feel your bare feet and the winds long to play with your hair.” 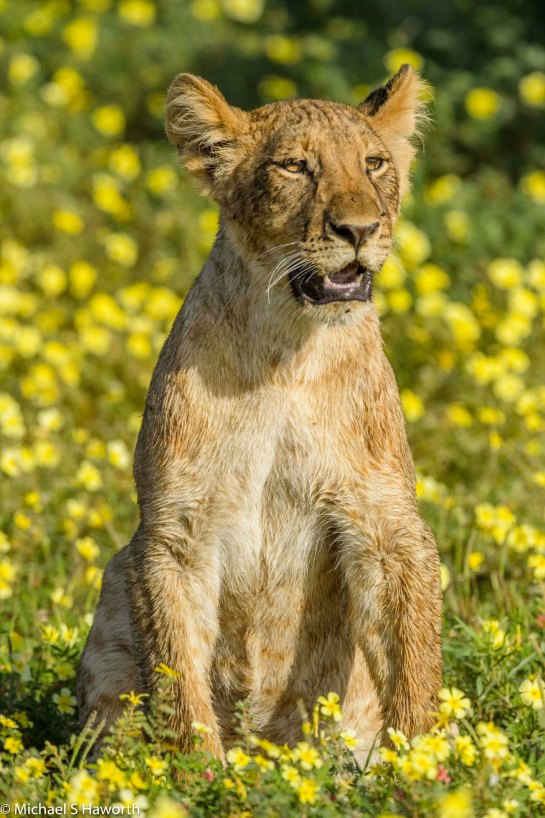 Much further way from the lions, this young female giraffe was sitting down. You don’t often see them on the ground like this because they are so vulnerable.

A coalition of three Cheetah males were lying in the grass just below “Cheetah Koppie” , so called because they often walk on top of this hill to get a idea of where the game is on the plains below. 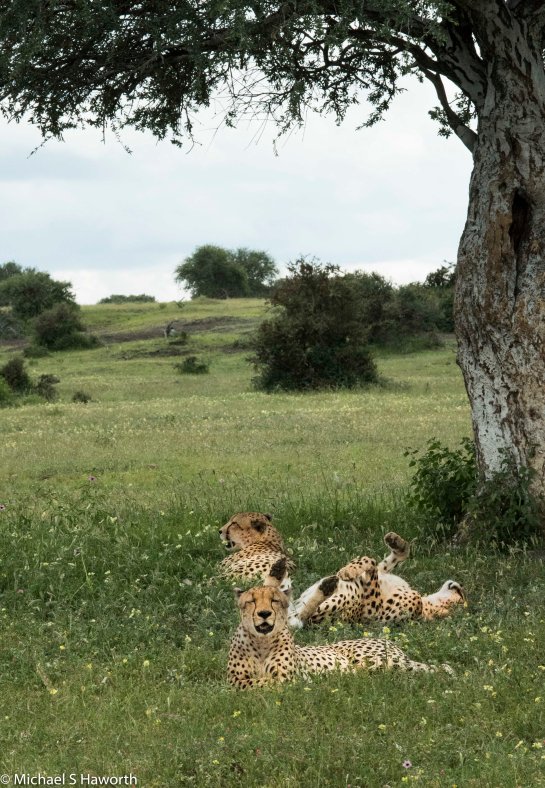 This Eland bull had been digging in the greenery with his horns and seemed quite comfortable with his new look.

This African Hoopoe was having a dust bath, in the late afternoon light, in the middle of the gravel road we were travelling along. It seemed to be quite content so we watched patiently while is undertook is dusty ablutions.

”Do more than just exist”

The next day we found two herds of elephant down at the Majale river. The group in the foreground were have such fun wallowing in the river. I have never seen this section of the Majale with so much water – wonderful to see.

At this time of the year the thunderclouds build up in the afternoons and dump their highly localised bounty.

In summertime the vehicle tracks are clearly demarcated with flowers. In winter, it is grey-brown and desolate. 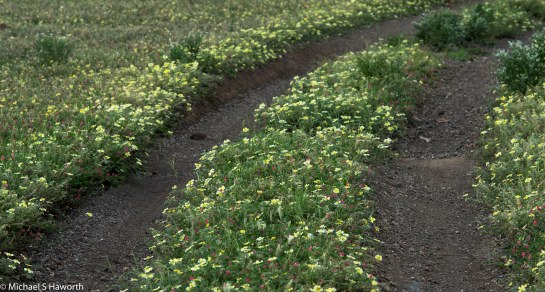 A female Steenbok  resting quietly  in a sand gully.

Black-backed jackals are ubiquitous. They are usually silent during the day but can often be heard at night, inevitably giving a predator’s position away. They are nimble and crafty creatures who tend to work in pairs. 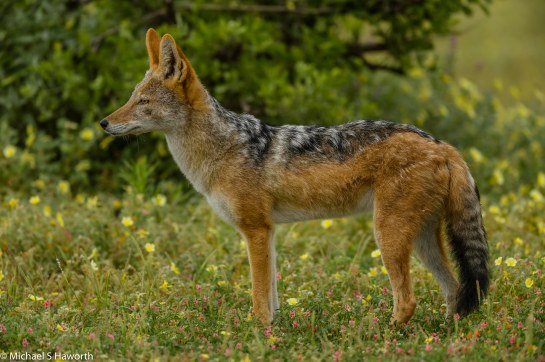 At this time of the year it is hard not to want to photograph the wonderful selection of wild flowers.

There is an inspiring array of sights, sounds and colours in Mashatu in summer and this Violet Backed Starling just added to the dazzle.

“Trees are the earth’s endless effort to speak to the listening heaven.”

To get a sense of peace and serenity there is nothing better than driving slowly along a dry river bed through a croton grove. It is quiet but for Meve Starlings, squirrels and Turtle Doves. Hobbits would love these areas.

”Fill your life with adventures, not things. Have stories to tell not stuff to show.”