Amboseli is synonymous with elephants.  The Amboseli Elephant Research Project is world’s longest study of elephants and forms an unparalleled body of knowledge on the life-history and behavior of African elephants.

“Elephants are living treasures. Nature’s gardeners. Nature’s great teachers. Tragically some people don’t give a damn. They prefer the dead treasure to the living one. The ivory. We must challenge this so-called ‘trade’ with all our might and shame on those who would condone it.”
~Virginia McKenna

According to Elephantvoices.org, the project was started in 1972. Amboseli has some 1,200 elephants (2011 figure, down from 1,600 in 2008 due to severe drought and poaching) which includes 58 families and close to 300 independent adult males. Each individual has been named, numbered, or coded and can be recognised individually. This degree of recognition makes the Amboseli elephants the best-known free-ranging population in the world.

“May the flowers fill your heart with beauty, May hope forever wipe away your tears, And, above all, may silence make you strong.”

We had just left the lodge at around 6h30 and were travelling south west towards the swamp.  About half a kilometre from the lodge we came across this elephant mother and her two youngsters fast asleep in the early morning light. In general, elephants will sleep a maximum of four hours per day/night. They do not sleep for an extended period only for about 30 minutes and then get up and feed and will then have a short sleep again. But each time they sleep on a different side. They repeat this cycle until they get their required (roughly) four hours of sleep.

The youngsters were “out for the count”. It was cool in the dawn light as the sun had not yet risen, that in between time when the nocturnal animals and birds seek a place to rest and the diurnal wildlife is awakening. I have never seen so many elephants sleeping on their sides as I did in Amboseli. It must be testament to them feeling safe there.

We were very quiet so as not to disturb this family slumber. After some time, the female awoke and slowly began to rise. She raised herself onto her knees before she stood up on her front legs and then hind legs. It was fascinating to watch her. She was still very sleepy and clearly did not want to get out of bed. Now standing she just stood in a sleepy daze for quite a while before the youngsters began to stir. We did not hear anything that would have woken them up so it must have been some infra-sound from their mother which caused them to stir.

Our time in Amboseli was characterised by heavy cloud. It often looked like it was going to rain heavily but never did. Away from the swamps the grasslands were open and dry. This can provide a wonderful opportunity to photograph elephants approaching from the horizon with clean backgrounds. 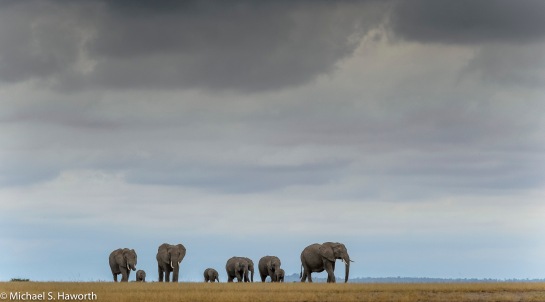 “If elephants didn’t exist, you couldn’t invent one. They belong to a small group of living things so unlikely they challenge credulity and common sense.”
― Lyall Watson

This small family had walked across a large open tract of grassland and were on their way to feed  on the luxuriant grasses in the swamps.

Sometimes the family would stretch out when they were walking towards us and then for no apparent reason (to us) they suddenly gathered together and stopped to assess a sound or smell that they had just come across.

One of those times when the family stretches out.

There were many calves at this time of the year and the calves remained between the adults for protection.

The bull elephants in Amboseli are impressive. This was a huge bull with large tusks in perfect condition. Looking at this massive creature, I concur with the quote that the only being that needs the tusks are the elephant. He was looking somewhat dusty having just showered himself with a huge amount of dirt a few minutes before.

“My weapon is the written word, and my battlefield is the page, and every time I connect with one of my readers the call of the wild travels just a little bit further. And I would walk a hundred miles and write ten thousand words if I could just bring back that one dead elephant bull that now haunts me. He haunts me, and yet at the same time he compels me to push on through the darkness, wherever it may take me. Anyone that has spent time amongst Africa’s wild things will understand; the pure poetry of nature, the awe and the longing to be close to something so much greater than what we are.”

Off in the distance we saw a big herd of elephants approaching, on their way to the swamp. What made this herd more interesting is it was accompanied by three huge bulls.

As the elephants approached our vehicle they gathered to protect the youngsters. 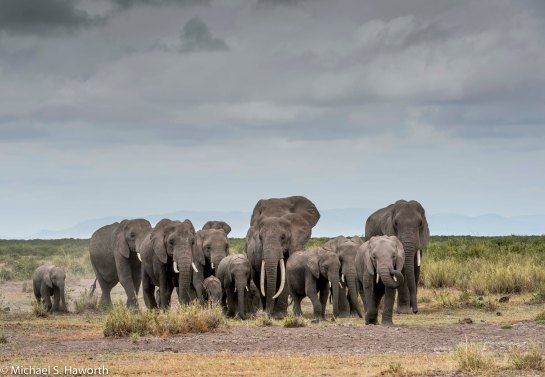 This herd of elephants approached us without a sound. When they got reasonably close they stopped seemed to have made an assessment about what we were doing and decided it was safe to pass.

Another larger herd followed the first. Andrew and Jimmy has assessed where to position the vehicle perfectly as we did not seem to disturb the elephants but they passed close by us.

“We admire elephants in part because they demonstrate what we consider the finest human traits: empathy, self-awareness, and social intelligence. But the way we treat them puts on display the very worst of human behavior.”
~ Graydon Carter

In this herd was a bull, the biggest elephant I have ever seen in my life. He was in musth but seemed to be very relaxed.

One of the other bulls in the herd gave use a wider berth. In the background was Observation hill.

I cannot show you elephant images without showing you some of the wonderful colours and textures of their skin. Part of an ear against its shoulder. 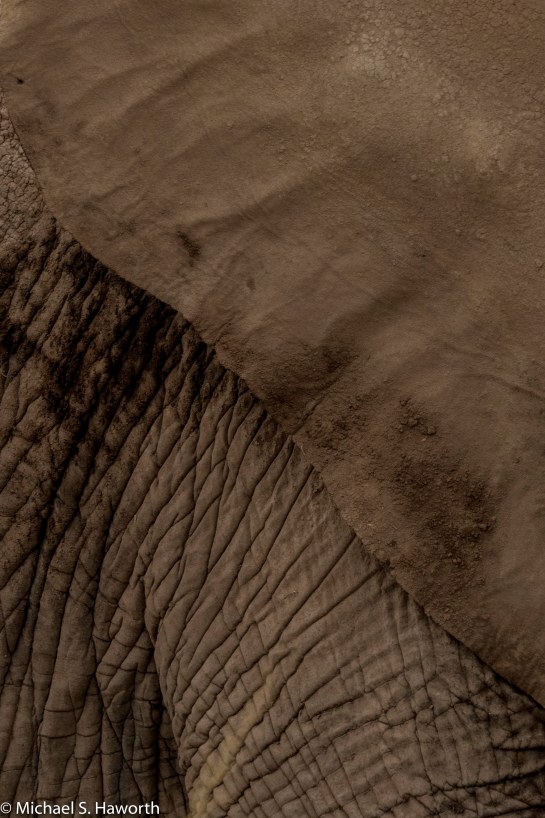 It is usually difficult to see the elephant’s brown eyes but you can be sure that the elephant sees you with those small brown intelligent eyes.

“But perhaps the most important lesson I learned is that there are no walls between humans and the elephants except those we put up ourselves, and that until we allow not only elephants, but all living creatures their place in the sun, we can never be whole ourselves.”
~ Lawrence Anthony, The Elephant Whisperer

Tusk and trunk, very different textures and colours.  Elephants’ tusks never stop growing so some bulls if they manage to grow old have huge tusks. According to elieaid.com, elephants’ tusks are actually elongated incisors and are essentially no different from other teeth. One third of the tusk is actually hidden from view, embedded deep in the elephant’s head. This part of the tusk is a pulp cavity made up of tissue, blood and nerves. The visible, ivory part of the tusk is made of dentine with an outer layer of enamel. 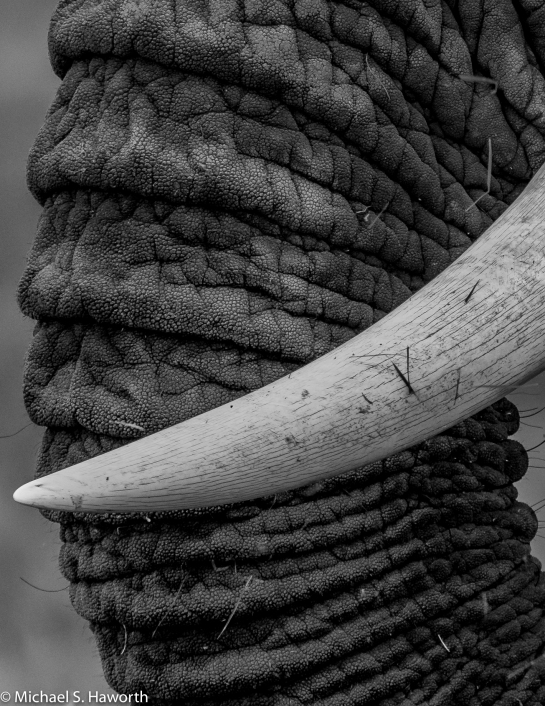 Down at the swamp, the elephants are constantly accompanied by Cattle Egrets. The elephants disturb insects when they walk and feed in the grass which the egrets are quick to take advantage of. Many egrets happily catch a ride with the elephant as it is walking along.

This big bull was wandering from herd to herd looking for females with which to mate. He had a long walk and was approaching two bulls behind us. All of a sudden for no obvious reason as he walked behind us suddenly charged one of the other bulls. Large bull elephants are ungainly when they run at speed. Ungainly or not you do not want to get in the way of that momentum. Needless to say the offender quickly got out of the charging bull’s way.

Another family herd emerging from the bottom of OloKenya swamp.

The herd comprised females and youngsters, with the small ones in the middle, as usual.

Their legs were wet from having been grazing on the grasses in the swamp.

The herd was on its way to browse in the acacia woodland. In between there was plenty of space to enjoy numerous dust baths. The elephants make a distinct track in the dry earth.

This image is at the end of the post, but was taken early in the morning a short while after sunrise. Again it was that in between time in the bush when everything is very quiet and serene. The sun started to peer through the thick morning cloud. Moments like these in the bush are sublime.

“Man must be made conscious of his origin as a child of Nature. Brought into right relationship with the wilderness he would see that he was not a separate entity endowed with a divine right to subdue his fellow creatures and destroy the common heritage, but rather an integral part of a harmonious whole. He would see that his appropriation of earth’s resources beyond his personal needs would only bring imbalance and beget ultimate loss and poverty for all.”
~ John Muir