I recently visited Amboseli for the first time with Wild-Eye, a photographic safari company. This trip was a revelation in a number of ways. The first was that Amboseli was easily accessible from Nairobi by road. I will regale you with stories about the return trip to Nairobi many posts from now. Prior to the trip, I spent some time trawling the “net” for images and information about the area. Despite my best efforts,  I was unprepared for the diversity, the moodiness of the place in the shadow of Mount Kilimanjaro, and the amount of game and birds we were about to experience.

“We need the tonic of wildness…At the same time that we are earnest to explore and learn all things, we require that all things be mysterious and unexplorable, that land and sea be indefinitely wild, unsurveyed and unfathomed by us because unfathomable. We can never have enough of nature.”
~ Henry David Thoreau

The second surprise was how overcast the weather was in late June. I have long since learnt that clouds can be a photographer’s friend, especially in the high contrast African sunlight. The clouds softened the contrast, added mood and provided some interesting backgrounds. 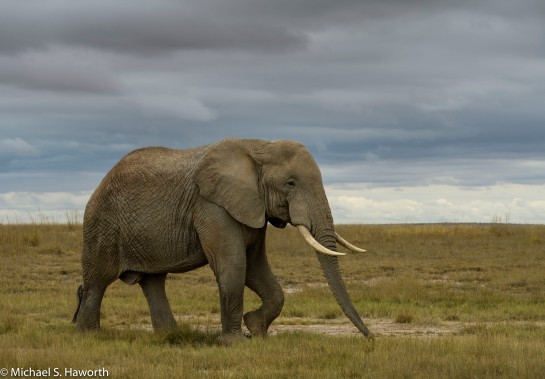 A noticeable feature of Amboslei was the number of elephants and the number of bulls with decent sized tusks among those elephant groups. This is a tribute to the longevity of the elephant but also the huge conservation effort which goes into protecting these magnificent, intelligent mammals. The bull in the next image was showing us that we were too close. A shake of the head caused those large ears to make a slapping sound against his body which was a clear message. 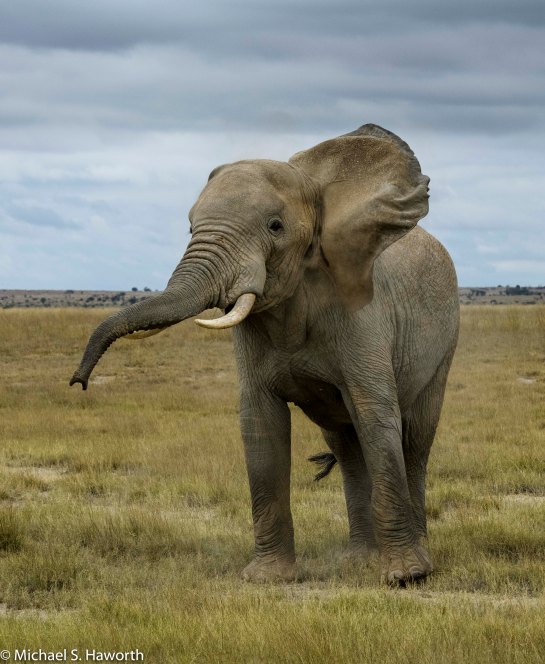 We stayed at the Serena Lodge in Amboseli, which was secluded in a grove of acacia trees. From the lodge’s veranda you could look through the acacia and fever trees onto a grassland plain. Among the fever trees close to the entrance of the lodge we regularly saw this Grey-headed Kingfisher, as this must have been its territory. 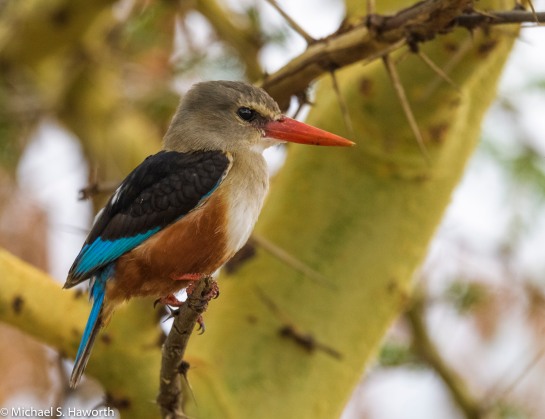 Away from the acacia forest around the lodge, the bush changed into thick grassland where we found his Kori Bustard stalking through the brush but keeping one eye on us as he did so. 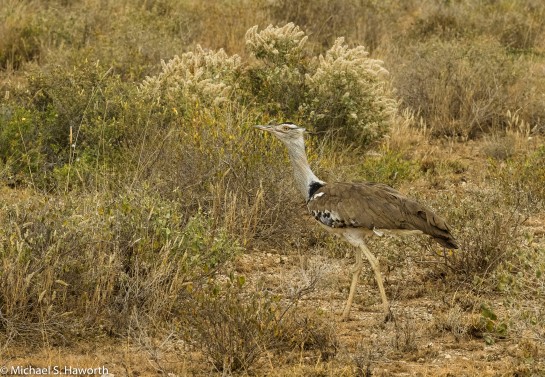 West of the lodge  beyond an open area of grassland we drove along a road which took us adjacent to a Wild Date palm grove. This palm has edible fruit and is found throughout Africa and tends to grow in areas where groundwater is present.  The Wild Date palm grove attracts abundant birdlife. The road  circled the grove and along the route we found numerous Little Bee-eaters hawking insects from the palm fronds. 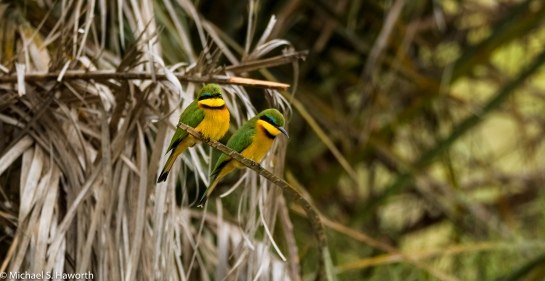 “Tell me, what is it that you plan to do with your one wild and precious life?”

Adjacent to this Wild Date palm grove we watched two bulls approach each other with purpose. It was with great anticipation that we watched these two converge. Almost like the start of a gentleman’s fight they shook each other’s trunk. 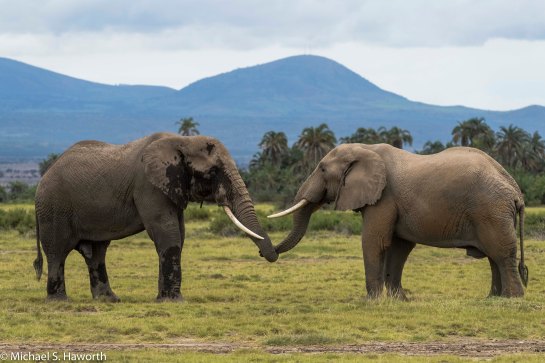 Then the tussle between these two adult bull elephants started. In a friendly way, the bigger of the two laid his trunk on the other smaller bull’s forehead.

The smaller of the two decided it was time to push back and ten tonnes of fun started. The two adult bull elephants began to push each other around in a play fight. 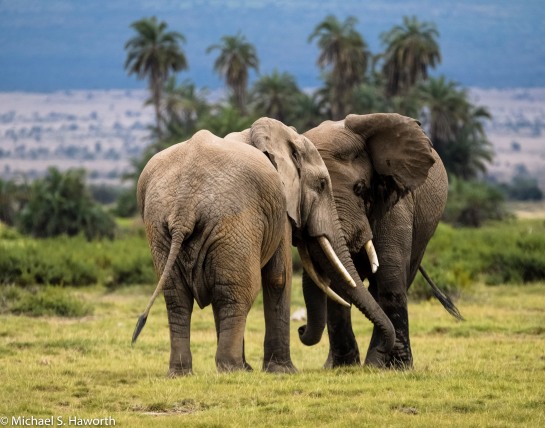 For the most part the pushing which playful but at times it looked like the game had the potential to turn serious. It was impressive watching two massive animals pushing each other head on! 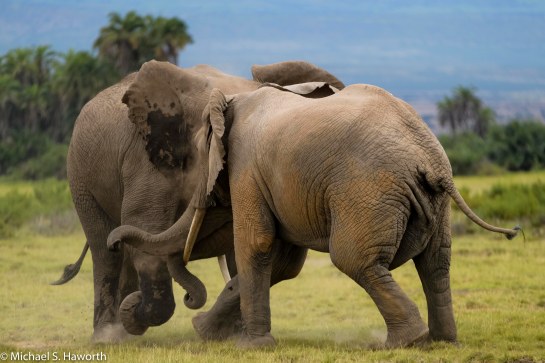 The two bulls moved to a more open area to continue their play fight. This was perfect as it gave us better perspective and backgrounds. 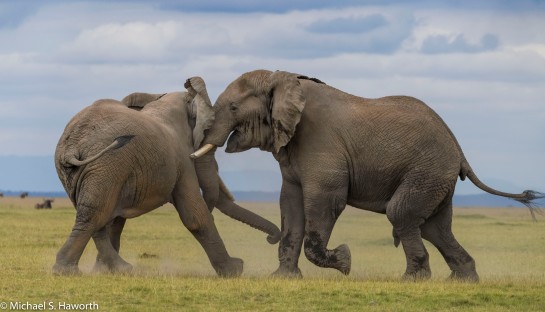 “All journeys have secret destinations of which the traveler is unaware.”

The bigger bull started to restrain his opponent’s right front leg giving him the advantage in the push. I have seen similar behaviour before where an elephant bull hooked the tip of his trunk around a young female’s back leg to restrain her in the one-sided courtship. 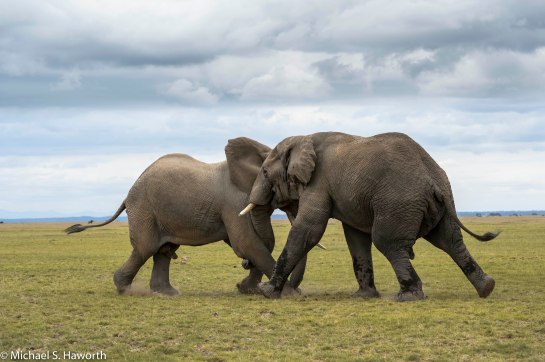 The younger of the two bulls was not a “push over” but he did not seem to have the same aggression as the larger bull. 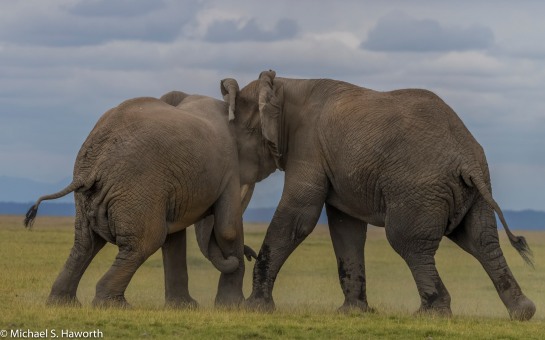 The larger of the two kept hooking his trunk around the smaller bull’s right front leg. This made me wonder just how strong their trunk muscle are? To restrain the movement of a middle-aged bull elephant’s front leg, the trunk muscles must be very powerful! 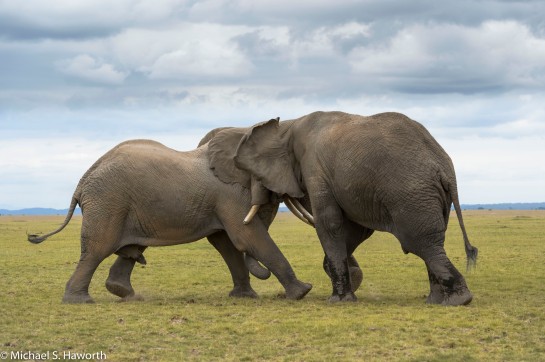 Once the two tusslers moved closer to us we could see how big they were. 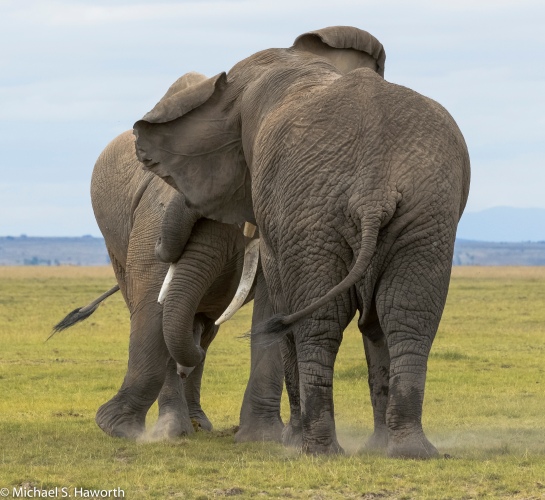 Eventually the larger bull prevailed and pushed the other bull into submission. 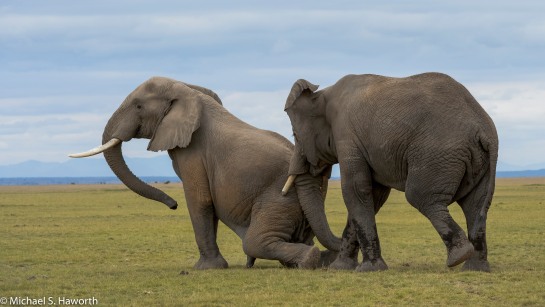 The tussle between the bulls was great fun and exciting to watch. The play fight was just that and neither body nor ego appeared two have been hurt, though the larger bull was the clear winner. After this exciting sighting we drove further to the Olokenya Swamp. Looking west we watched a family group of elephants dusting themselves with Mount Kilimanjaro shrouded in cloud in the background. 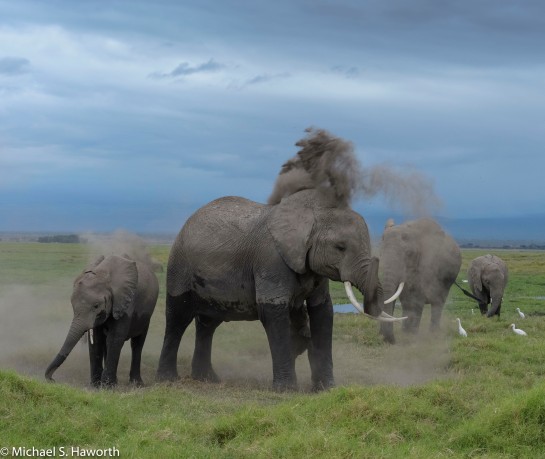 Amboseli’s emerald-green swamps are fed by the melting snows of Kilimanjaro. These are the only sources of water in this otherwise starkly beautiful but arid park. The resulting swamps attract huge numbers of wallowing elephants, hippos, buffaloes and plains game. 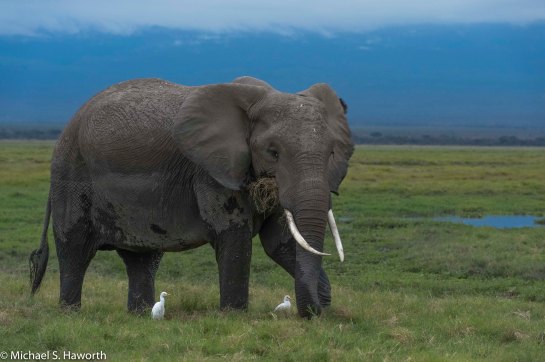 Cattle Egrets were attracted by the elephants disturbing the insects in the grass. The white egrets punctuated the moody late afternoon scene. 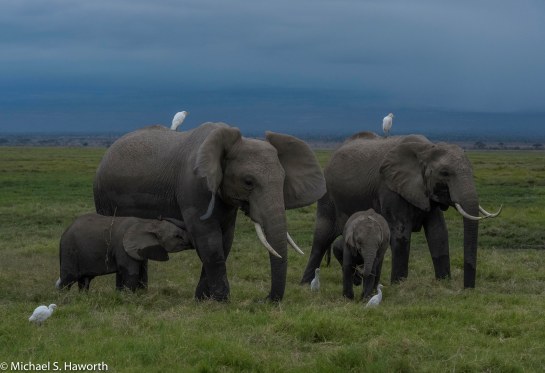 “… there’s a silent voice in the wilderness that we hear only when no one else is around. When you go far, far beyond, out across the netherlands of the Known, the din of human static slowly fades away…..”
~ Rob Schultheis 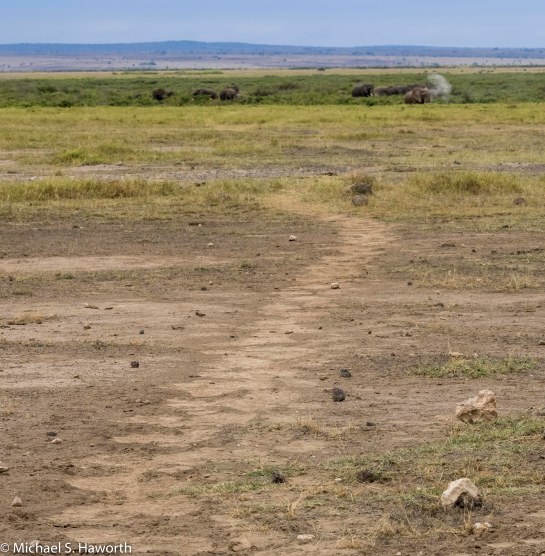 The elephant groups were remarkably peaceful with only the odd youngster making a noise. The peace and serenity of the scene was soul soothing. 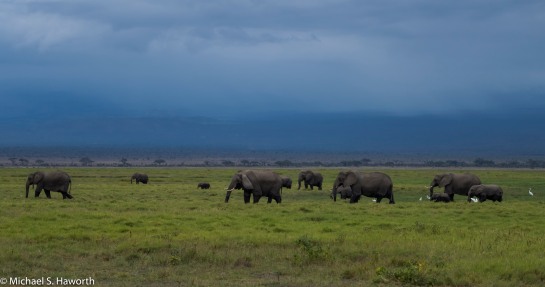 These white Cattle Egrets worked with the elephants. The elephants disturbed insects in the grass they were foraging on, which the egrets eagerly snapped up. The egrets were also happy to just park or catch a run on an elephant’s back. 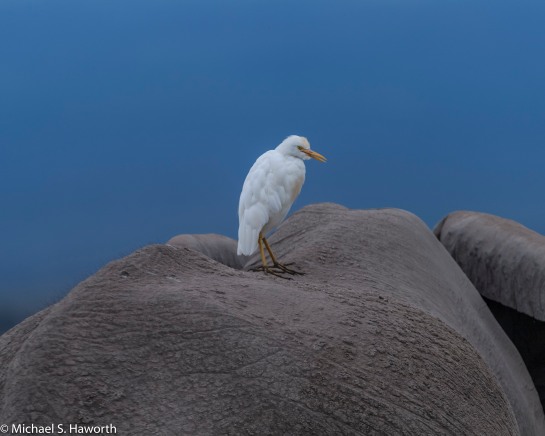 On the opposite side of the road to the swamp, the area was dry with acacia trees in the middle ground. The heavy cloud cover created by Mount “Kili” added to the moodiness of the scene. 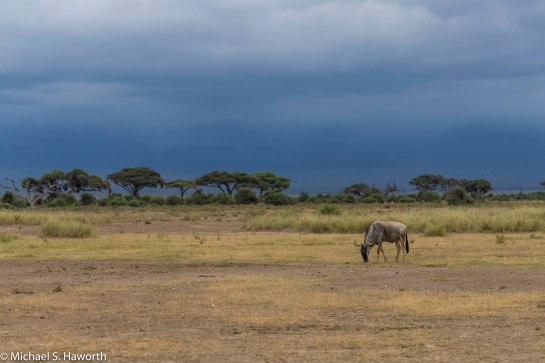 This looked to me to be a juvenile Two-banded Courser. On our first day, I began to get a sense of the prolific bird life in Amboseli. 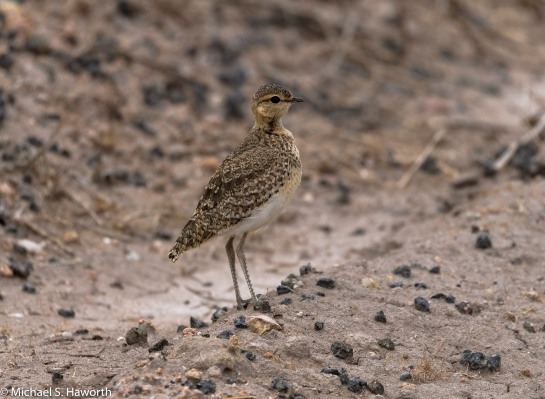 On our journey around the fringe of the swamp we saw many zebra, Thompson’s Gazelle and wildebeest. It was quite dry and dusty, perfect for a roll and dust bath. 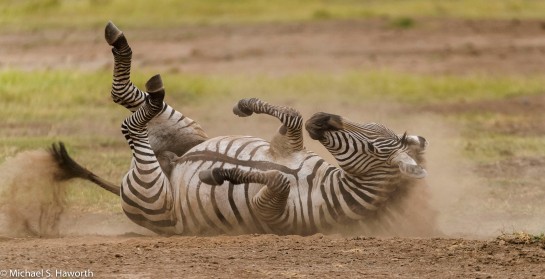 All the activity on the edge of the swamp did not go unnoticed. This hyaena scout was watching and waiting for an opportunity. I have seen them do this in the Serengeti, they hide in tufts of red oat grass. When an opportunity for food comes their way they start whooping and calling for reinforcements.

“In my perception, the world wasn’t a graph or formula or an equation. It was a story.”
~ Cheryl Strayed

It was early evening by the time we reached the swampy waters on the west side of the fever  and acacia tree forest around the Amboseli and Oltukai Lodges. This bull was big, alone, and looked to be really enjoying the peace and abundant food. 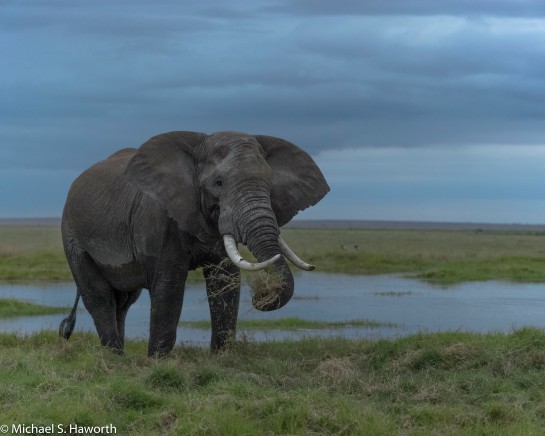 It was getting dark but I just liked the early evening reflection of this “big boy”.

“The darkest thing about Africa has always been our ignorance of it.” 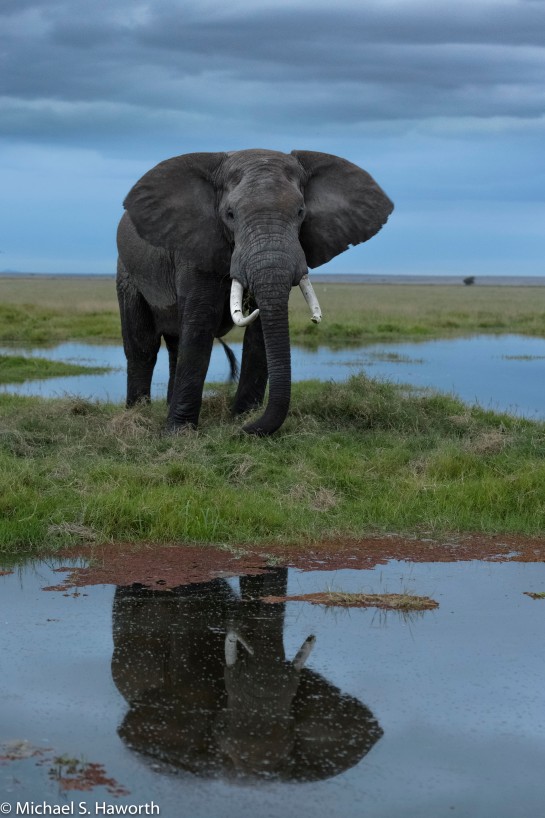 In the late afternoon, the cloud cover was thick and it was getting quite dark when suddenly the sun peered through as if a part of the curtain had been pulled aside. It is times like these when I am so grateful to be in the bush and be able to witness such dramatic beauty. 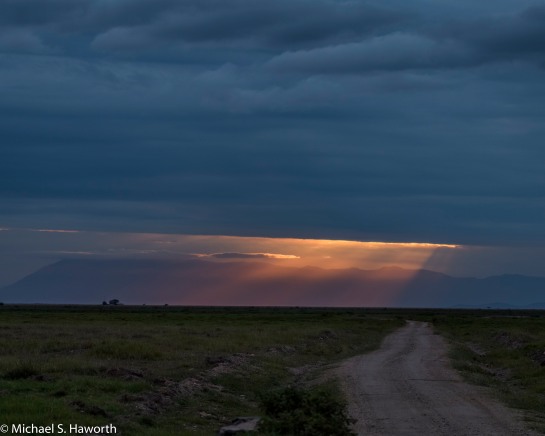 “Every creature was designed to serve a purpose. Learn from animals for they are there to teach you the way of life. There is a wealth of knowledge that is openly accessible in nature. Our ancestors knew this and embraced the natural cures found in the bosoms of the earth. Their classroom was nature. They studied the lessons to be learned from animals. Much of human behavior can be explained by watching the wild beasts around us. They are constantly teaching us things about ourselves and the way of the universe, but most people are too blind to watch and listen.”
~ Suzy Kassem

To Andrew and Jimmy thank you for a wondrous journey!

Explore, seek to understand, marvel at its interconnectedness and let it be!

One thought on “Amboseli – the beginning!”