This post shows a few of the images taken during a weekend in mid-December at Indlovu River Lodge. This Lodge is located on the banks of Kuvjenami river,  in the 9000 hectare Karongwe Private Game Reserve. This reserve forms part of an area called the greater Kruger National Park. Near Hoedspruit, Indlovu River lodge is one of only a handful of lodges in  Africa which have specially setup, sunken photographic hides looking out onto carefully structured waterholes. These hides enable photographers to capture close up images, with a  perspective of their subjects at water level.

“Everybody needs beauty as well as bread, places to play in and pray in, where nature may heal and give strength to body and soul”

It was very hot and had rained for a couple of days before we arrived so the animals and birds had dispersed somewhat and did not need to concentrate at the hide waterholes. We went to two different hides over the course of the three day trip, one a bird hide and other an animal hide next to a bigger waterhole. 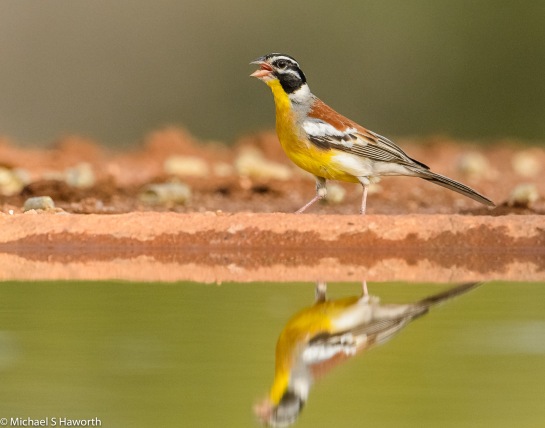 Male Red-billed Quelea in his breeding plumage. He was  panting because it was very hot. 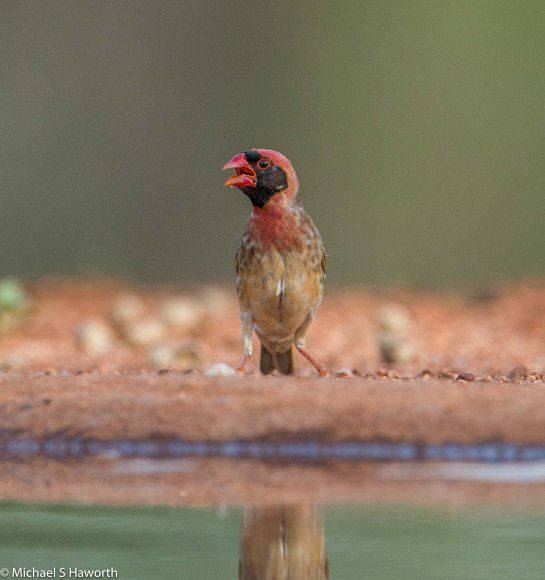 Male and female Village Weaver. They are slightly bigger than the Southern Masked Weavers and the male has a yellow crown, black mask and black stripe down his throat.

A Yellow-fronted Canary with its bold facial markings and greyish crown and nape. 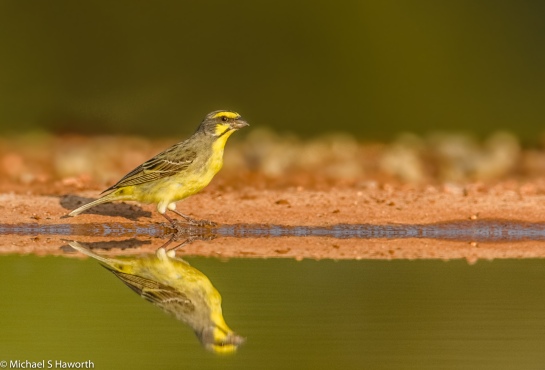 This Nyala bull wandered past the hide in the late afternoon.

We were all set up to photograph small birds, so when a bull Nyala walked past the best I do do was get a head shot. I am not sure how these antelope cope in the intense heat with their long hair.

A small herd of plains Zebra approach the bird hide to drink but were very were of the “things” clicking away inside the hide. Eventually the caution got the better of them and they moved off to browse in the shade. They were probably waiting for us to leave.

“Nature is painting for us, day after day, pictures of infinite beauty, if only we have the eyes to see them.”

When activity went quiet in the hide we looked for more abstract images.

This southern masked Weaver was enjoying his bath  and being able to cool down in the heat.

The “dip and shake” bathing technique – the no hands adaptation.

Male Red-billed Quelea with a female Village Weaver, both thirsty and looking to cool off in the water. 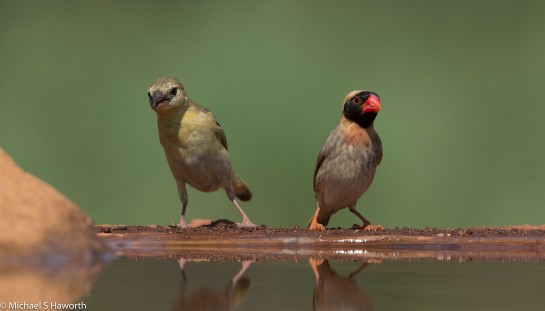 A pair of Blue Waxbills. There are not many southern African birds with this powder blue colouring. 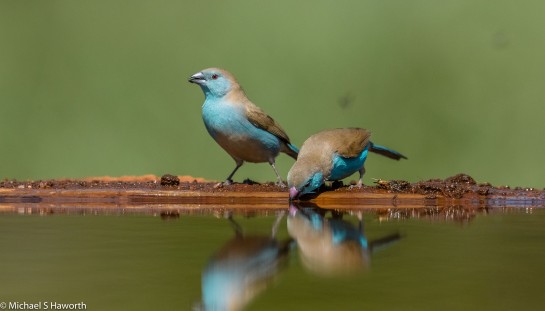 A lone Blue Waxbill. These birds are small, only 12 cm, so you need a long lens ( minimum of 600mm) to get a decent image. 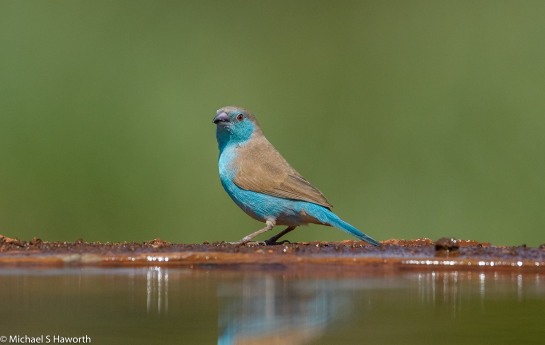 Group bath  – a pair of  Village weavers bathing together with a Blue Waxbill.

“Joy in looking and comprehending is nature’s most beautiful gift.”

A lone Red-billed Oxpecker. This character must have broken off from its cleaning chores on antelope and Buffalo to come and have a drink. Usually you will find them in a small flock rather than singly.

This lone young Cheetah had killed and, by the time we got there, had almost completely eaten an Impala fawn.

This Cheetah had a collar on so I had to wait to get an angle where the collar was hidden. The bush is dense in this area so finding the Cheetah would be almost impossible without a tracking collar. Unfortunately, three of the Cheetah on the reserve had been killed by lions in the past year.

This Cheetah had been habituated so we were able to walk through the bush to within about 15 metres of it while it was feeding without upsetting the animal. This seemed very strange to me and I did not like the idea. Good for photography but not the Cheetah.

Having had its fill of Impala, this young Cheetah walked around the kill site taking in all the scents. 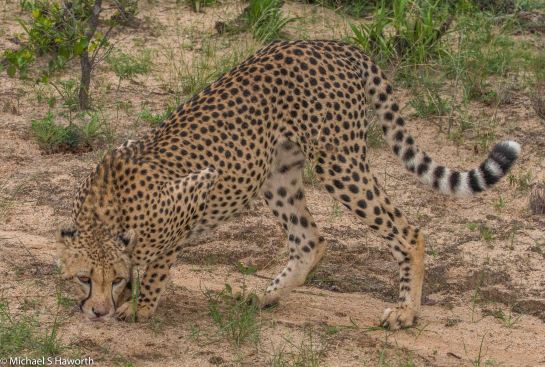 We found two Black-backed Jackal pups waiting in the sand road for their parents to return from their foraging with some food. 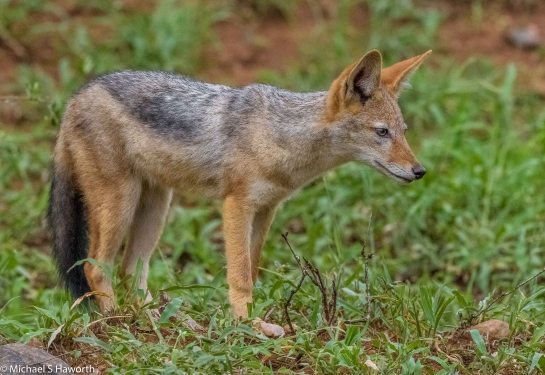 There was no noise, they just waited patiently. We never saw the parents. 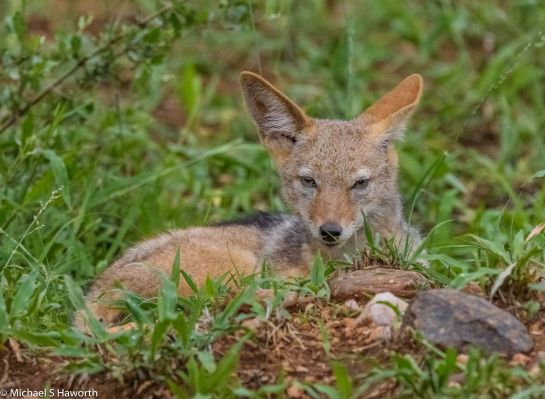 It was very hot (around 40 degrees centigrade) in December in the hides in the Hoedspruit area, which was to be expected at that time of the year. The Cheetah and Jackal images were taken with flash as the weather closed in on the last day of our trip and thankfully cooled everything down. The photographic pickings were slim as there had recently been rains. With plenty of water around, the animals and birds did not need to congregate at the hide waterholes. Regardless of whether the hides were busy or quiet it was wonderful to be in the bush again.

Many thanks to Derek and Norma Pearman for organising the trip. It was first time photographing from bird hides other than the Giant’s Castle one. Thanks also to Louis Swart, a photo buddy, for inviting me to join him on this trip. I thoroughly enjoyed meeting new people and going to a new place and of course all the stories that go with this sort of trip. We will try to get back there in winter when it is cooler and there is less water around. The hides are well set up and I think in the right conditions you will  get excellent close up opportunities.

“The conservation of nature, the proper care for the human environment and a general concern for the long-term future of the whole of our planet are absolutely vital if future generations are to have a chance to enjoy their existence on this earth.”
~ HRH Prince Philip