This is the second post from my recent trip with CNP Safaris to Etosha in mid-May 2015.

Some might think it is boring to go to the same two waterholes day after day. Nothing could be farther from the truth. The two waterholes we frequented were within easy access of the Namutonicamp and Von Lindequist gate. Firstly, Klein Namutoni is an afternoon waterhole as the sun sets on your back in the afternoon and shines directly into your face in the early mornings. So not only does the light change considerably but so too does the passing parade. While there are some regulars, the congregations of game change during the day and from day to day. The waterhole is large and elliptical in shape and its surrounds are littered with white calcrete stones, which give it that characteristic Etosha look.

The Chudob waterhole has the parking area on its north and north-west side so you can photograph in the mornings and afternoons. Chudob is much smaller and circular and you are closer to the game. This waterhole is in a saucer shaped indentation which can provide some wonderful perspectives.

Some days are warm and sunny and the air is still. During these conditions the game is more active and often the animals venture right into the water to cool off. Other days when the wind is blowing, it usually cooler, and the game is uneasy and skittish as their hearing and smell senses are diminished by the wind.

Sometimes the regulars bring their young ones down to the water and that is usually the catalyst you need to get some fun shots. 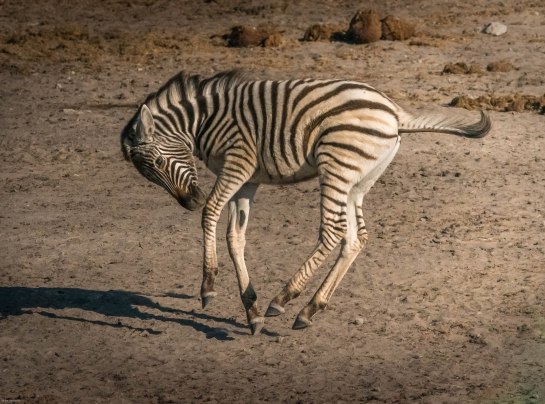 There are distinct pairings of Zebra, even though there is a strict hierarchy in the family group. Certain individuals seem to be very fond of each other. 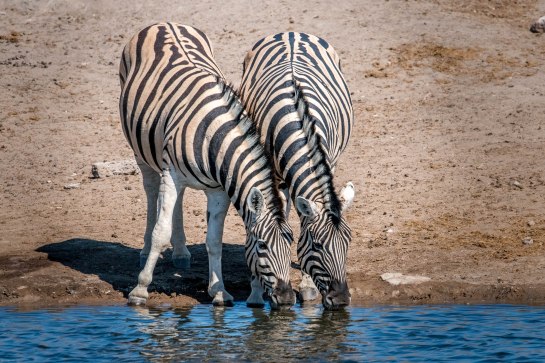 Warthogs usually come down to drink and wallow at the water’s edge either singly or as parents with their youngsters.

A Warthog male had a long drink to slake his thirst and then unabashed lay down to roll in the cool sand at the water’s edge. This particular fellow was quite confident and disregarded all the other animals which came down to drink. If there had been predators such as Hyaenas, I am sure he would have been less indulgent.

These characters can be very funny – difficult to photograph when you are laughing. 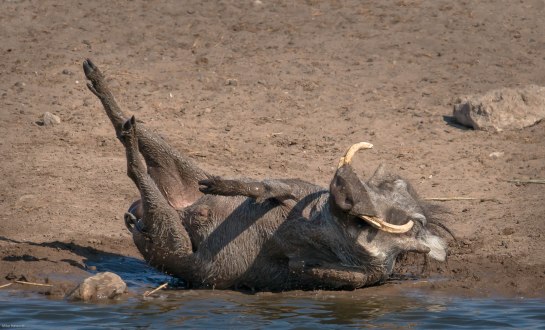 One of the special aspects about the waterholes in Etosha is that the game seems to mix it up. The herbivores tolerate each other around the water’s edge. I guess there is always safety in numbers and more eyes watching for predators lurking along the treeline. The Guineafowl are also good sentries.

Some of the Kudu families were quite big. They seemed to thrive on the thick bush and tree vegetation, being browsers. It is interesting to watch animals and birds drink. They usually have a pattern, say four long draws of water before they look up to check if all is still safe. Birds are the same, especially Doves. Watching for these patterns helps you anticipate the animal or bird’s next move.

The Kudu bulls were big but nothing like as big as the Eland. It is clear that the larger herbivores do not fuss about small predators such as the two Black-backed Jackal. All the animals wandering around the 100 metre clearing between the water and treeline are wary because of what can emerge from the trees. 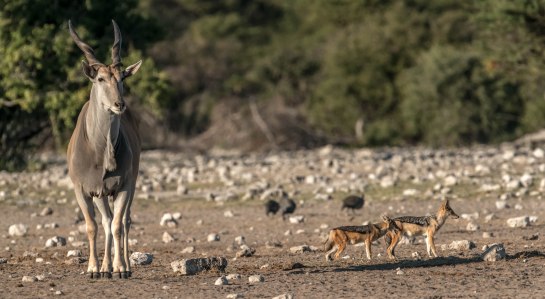 The Kudu families were also orderly but both Zebra and Kudu were skittish down at the water’s edge. It was that sudden dash out of the water we were waiting for. 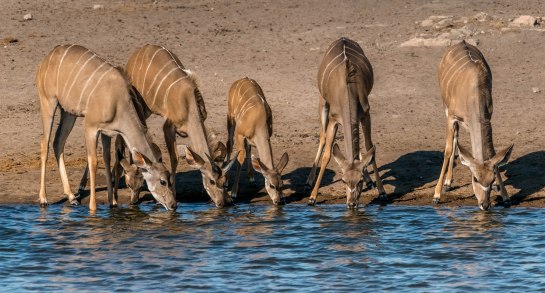 Practicing for when he is big but much to learn!! 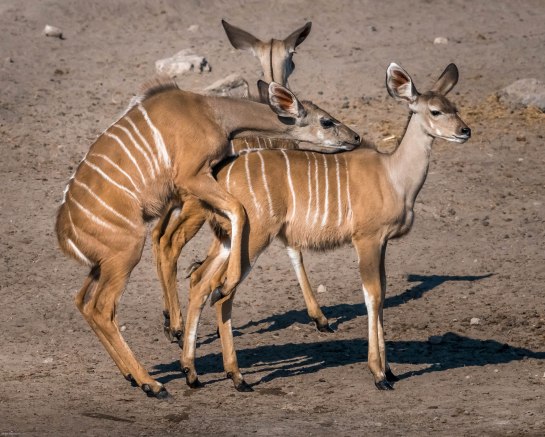 This Kudu female was spooked by something. Often it is just a Giraffe humping its hooves on the ground exerting its dominance around the waterhole. The waterhole rule seems to be that if you hear someone else running away from the water it is a good idea to start running away too. 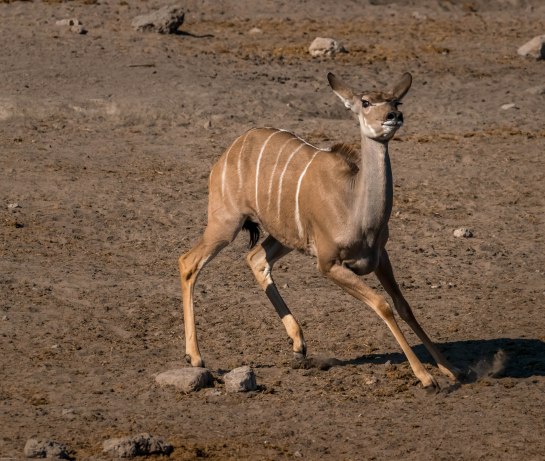 This is what makes a ordinary waterhole a fascinating place to take photographs. One second a Kudu female can be quietly drinking and an alarm call or an unusual sound triggers the flight response and the the next second the same female spins around to bolt away from the water’s edge, splashing water everywhere.

“Bloodlines and last names didn’t make a man extraordinary — the extraordinary existed in what we did in life, not in who we were.”
― Courtney Alameda, Shutter 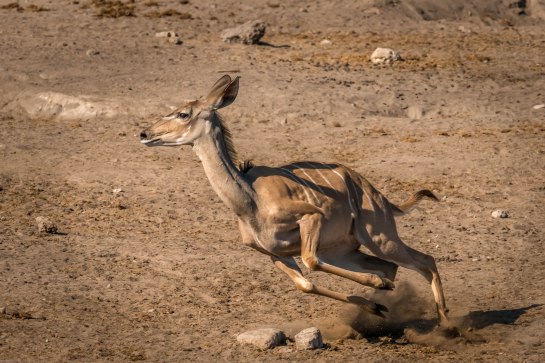 Some animals just walk away from the water once they have had their fill, others want to get away as quick as possible. 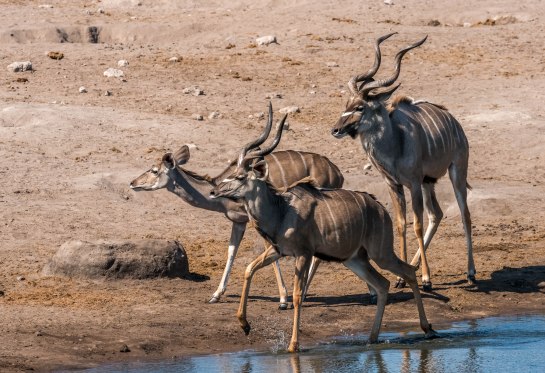 Heads down drinking but eyes wide open searching across the water to ensure all is safe and calm. 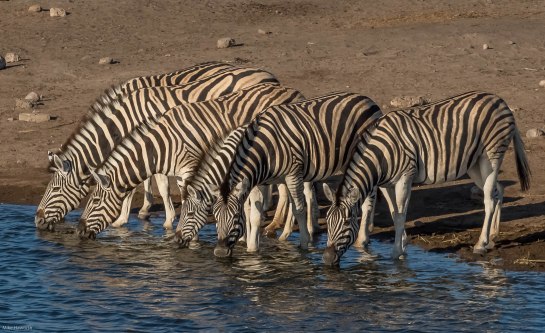 Mature Eland bulls have a tuft of curly hair on their foreheads. When they walk down to drink you can hear the distinctive clicking of their tendons. In the BMC Biology journal ( http://www.biomedcentral.com/1741-7007/6/47/abstract ) scientists  Bro-Jorgensen and Dabelsteen  showed that the loudness of the clicking sounds produced by walking eland bulls correlated to body size and signalled a bulls’ fighting potential. The sound is thought to be made as a tendon in the animals’ legs slips over one of the leg bones, and can be heard from hundreds of meters away. In this case, the tendon  behaves like a string being plucked, and the frequency of the sound from a string correlates negatively with both its length and diameter, so the sound signals the size and fighting fitness of the Eland bull.  The clicking tendons adds to the list of signals an Eland bull uses to indicate its status. Other signs such as the dewlap under their throats which indicates age, and the darkness of their hair which indicates levels of aggression. The characteristics help bulls establish mating rights among each other usually without actual fights. 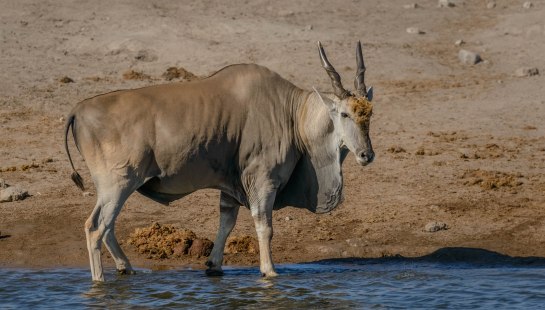 This mature Kudu bull heard something he did not like while he was drinking. These are the moments we wait for as wildlife photographers. 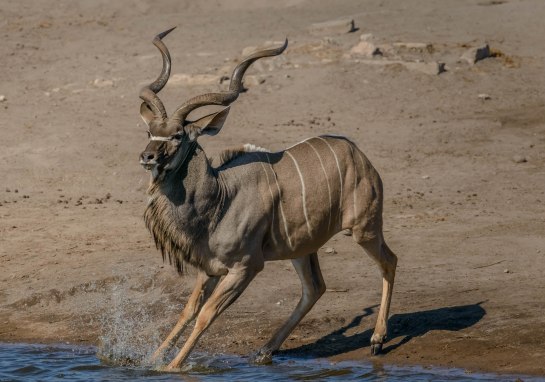 It is not only the youngsters which stir things up around the waterhole but dominant stallions and bulls do the same. This Zebra stallion was galloping around some of his mares twisting and turning in swirls of dust.

“We wait, starving for moments of high magic to inspire us, but life is full of common enchantment waiting for our alchemists eyes to notice.”
― Jacob Nordby 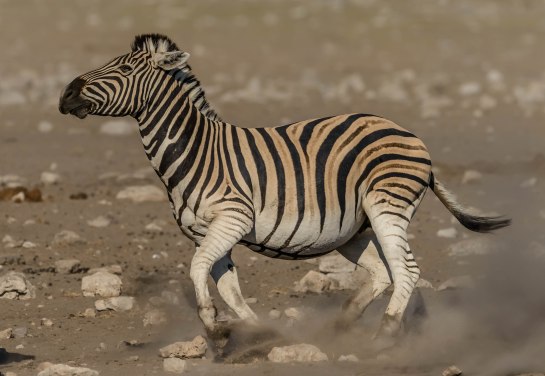 I have seen Eland bulls dig their horns into the dirt and the old Buffalo bulls called “Dagga boys” also do it coating their bosses with mud and vegetation. I have never before seen a Kudu bull dig his horns into the ground.

I could not resist this Kudu bull’s antics while trying to avoid being bitten by something. He was twisting and turning to try and get at the bitten spot. It is quite remarkable how supple these large browsers can be. 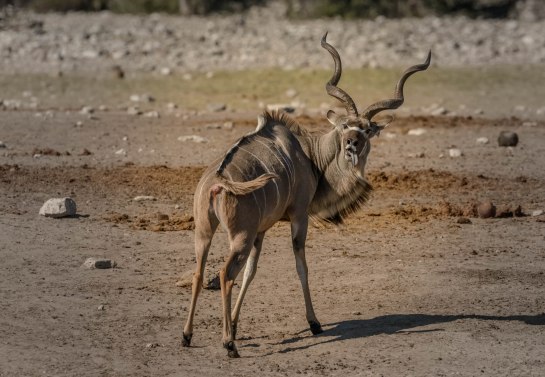 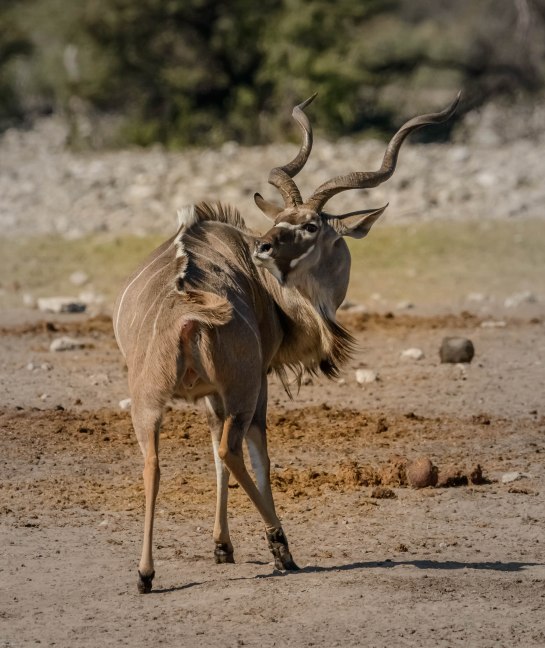 Impalas are  quick and agile antelope, which are  capable of jumping over three metres in the air performing displays called ‘pronking’. When startled, a whole herd will begin to pronk in order to confuse their predators and is also used to demonstrate the health and strength of the individual. 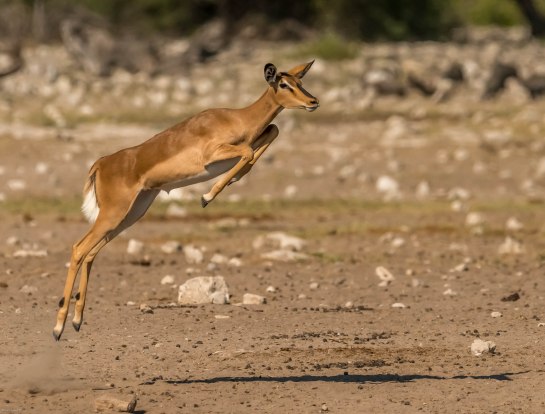 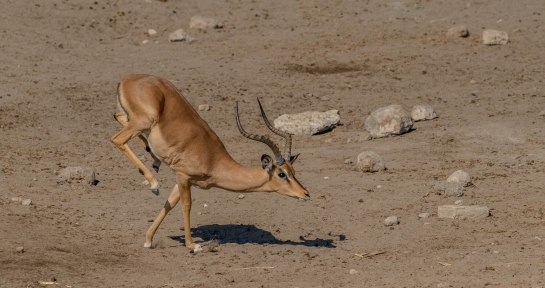 There must be some primal instinct in these Impala because they still watch the surface of the water as if looking for something like crocodiles lurking under the surface. 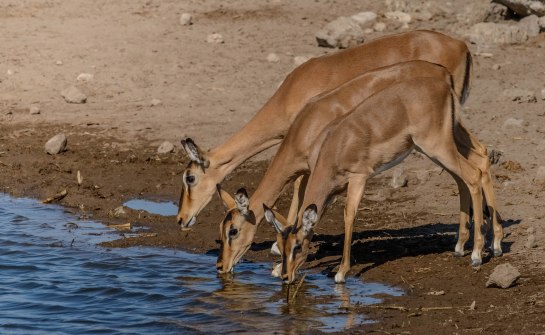 It is not often you will see all the Impala’s heads down drinking. they are usually very wary. 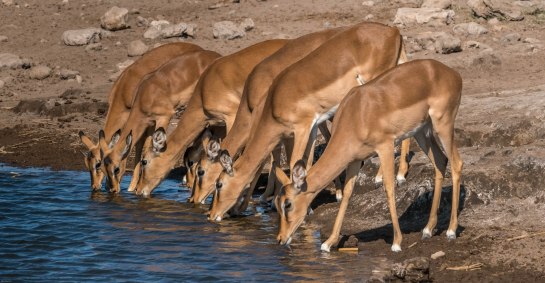 After a gestation period of seven months the female Impala will produce a single fawn. The female is capable of delaying the birth by an extra month if conditions are harsh. The fawn will often be isolated from the herd while the female is nursing it. Fawns are weaned at four to six months. They join a nursery group until they are old enough to join the adult herd. Matured males will be forced out of the herd and will go off to join bachelor groups. 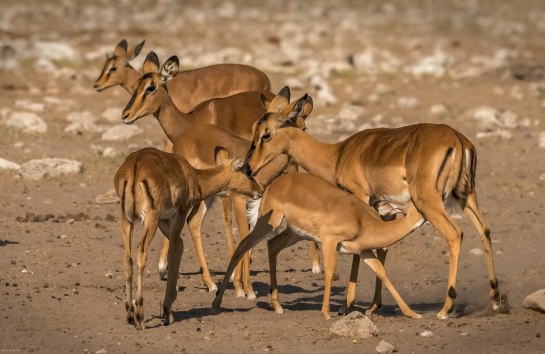 Gemsbok can often be found in large groups as they are gregarious animals. Their social system tolerates non-territorial males among the females and young.  Males tend to be solitary and defend a territory but are known to spend a short period with a larger herd of females before moving off  on their own again.

Male dominance is hierarchy based on age and size.  Ritual displays usually replace actual contact, except between evenly matched individuals who may still fight to establish their rank. Gemsbok males often spar with their sharp, spear-like horns, but serious fights are rare. 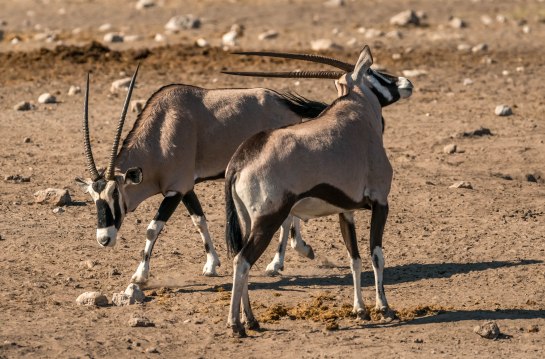 Female Gemsbok horns are usually longer and thinner than the males!!! 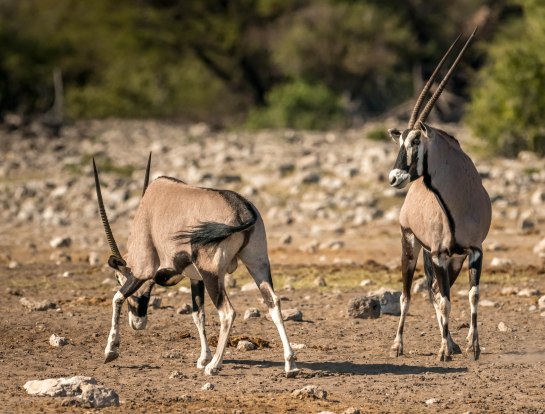 You will not see an Impala knee deep in water but it is not uncommon for Springbok to walk right into the water to drink.. 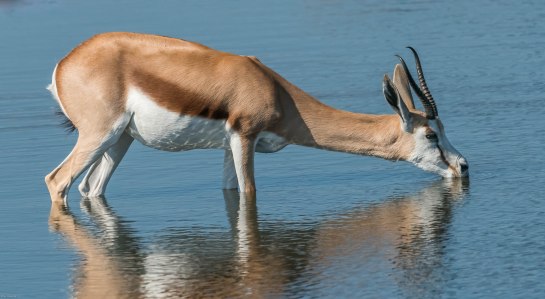 A small group of Springbok spooked by something down at the waterhole.

The next image shows fellow photographer Hennie Blignaut standing in front of one of CNP specialised photographic vehicles in the Namutoni camp car park. There are two photographic seats mounted in the back of the vehicle. These custom photographic chairs have an integrated camera support for heavy camera-lens combinations giving 360-degree horizontal movement. The camera support has a Wimberley Head which is a specialised tripod head for telephoto lenses. It is a gimbal-type design allowing you to 360 degree horizontal rotation and major vertical rotation of your lens around its centre of gravity. The customised seat is positioned in front of large goose-wing windows which lift out of the way to provide generous visual space for your camera. 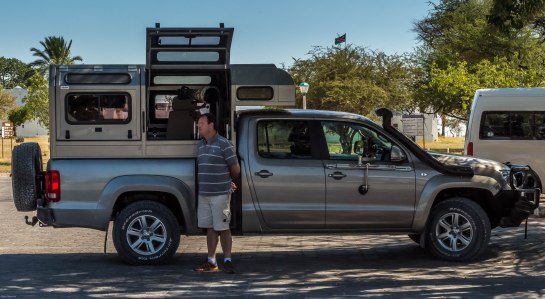 “Nature is so powerful, so strong.Capturing its essence is not easy – your work becomes a dance with light and the weather. It takes you to a place within yourself”.

One thought on “Etosha waterhole wonders”