Friends Bill and Judy Pierce invited us to join them at their lodge in Eagle’s Rock Estate last weekend. This is a wildlife estate located about 15 kilometres due north of Witbank in Mpumalanga, South Africa. The estate is characterised by its sandstone formations and a wonderful deep, rugged valley down which the Olifants river flows, fed by the Witbank dam and feeding the Loskop dam some 25 kilometres downstream.

“What a joy it is to feel the soft, springy earth under my feet once more, to follow grassy roads that lead to ferny brooks where I can bathe my fingers in a cataract of rippling notes, or to clamber over a stone wall into green fields that tumble and roll and climb into riotous gladness!”

I got up early on the Saturday morning to catch the sunrise. The next image was taken around 6h00. I awoke at 5h30 and looked out of the window to see the sky ablaze with the first light shining on the clouds well before sunrise. I was surprised as it had been very overcast and cloudy the day before but sky had cleared beautifully.

I moved a short distance up the valley to change the perspective. Even though it was mid-autumn, the flora was still remarkably green because of the recent rains. The sky was painted with warm, early morning light.

The colours changed as the sun climbed higher in the sky. I waited until the sun moved behind a bank of clouds to take the next shot. When editing the image, I saturated the colours to emphasise the mist in the valley.

A short while later when the sun was well up in the sky, I took the next image of the vista looking north-west. It was still early enough for long shadows. 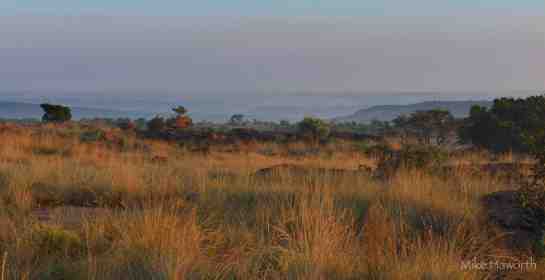 “Cherish sunsets, wild creatures and wild places. Have a love affair with the wonder and beauty of the earth.”

On the estate, apart from the main Olifants river valley, there are a number of lesser valleys but there is one along which a stream flows into two small dams. This valley has lush flora and its sides have rugged, steep sandstone faces about 30 metres high. There is plenty of wildlife which also seems to like this valley. The next image shows one of the many pairs of Natal Spurfowl which forage along the valley road. The males grow spurs which they use for fighting. You can tell the age of a male Spurfowl by the degree to which his spurs are worn down.

As a photographer, one of the of the aspects I am constantly intrigued by is the remarkable colours and moods the backgrounds can provide. I liked the heavy dew on the grass where this Natal Spurfowl was foraging.

Another member of Francolin/Spurfowl family which you are likely to see in the main valley in Eagle’s Rock estate is the Coqui Francolin. It gets its name from its call. As with most Francolins and Spurfowl they would rather skulk away through the undergrowth than fly away from you. The next image is of a female Coqui Francolin with its distinctive white throat bordered by a black ring and black facial markings. The female is more cryptically coloured than the male. 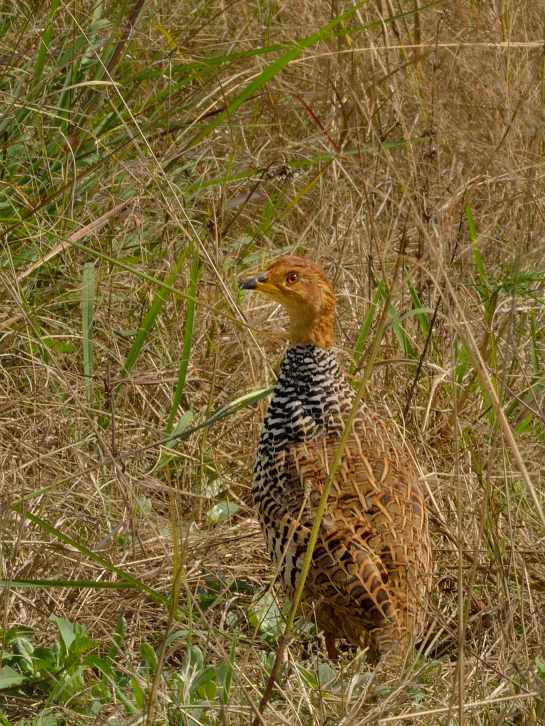 I have only ever seen Coqui Francolin at Eagle’s Rock and in the Pilansberg National Park in the North West province of South Africa.

The  valley I was wandering down was characterised by steep, rugged sandstone sides. This is a perfect home for Rock Hyraxes. The  Rock Hyrax ( Dassie) in the next image gave itself away with its distinctive barking. Rock Hyraxes  spend the night in dark, cold cavities in the rocks so early in the morning they sit on the rocks to warm up. Rock Hyraxes are territorial which makes they a convenient and constant source of prey for the resident pair of Black Eagles.

Being rugged sandstone terrain, this is also a perfect environment for Klipspringer. This female was watching me intently for a short while. 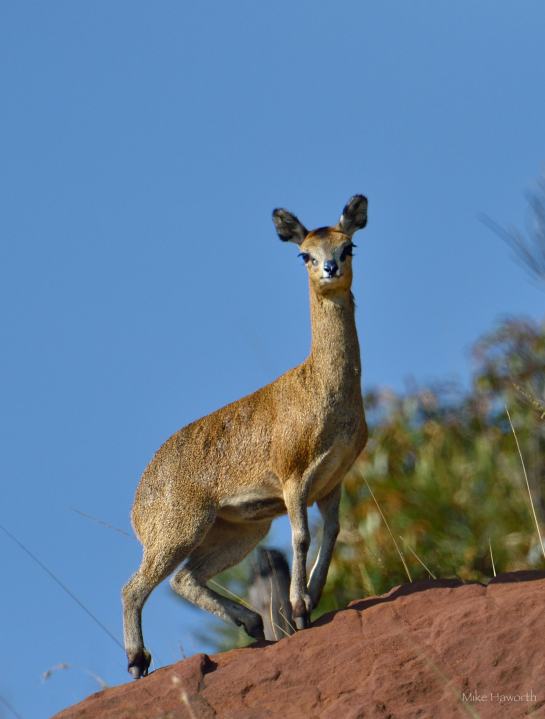 As I was moving down the valley road around 8h00, this pair of Klipspringers were alarmed by something they could see among the grass and boulders below them. They hardly took any notice of me and were transfixed on what must have been a potential threat. They were clearly alarmed and called to each other continuously. I never saw the threat but there are Leopards resident on the estate. Most antelope are territorial and the Klipspringer uses its pre-oribital scent gland below its eye to mark twigs and grass much like a Duiker and Oribi.

Sometime later, the threat had disappeared and the Klipspringer family were out on the sandstone boulders. The male and female were on the right hand side and the youngster on the left. Smaller antelope tend to be solitary and monogamous, and occupy constant territories throughout the year. Klipspringers are browsers but are unique antelope by virtue of the hooves and hair. Their hooves are cylindrical and blunt allowing them to walk on “tip toes” on the rocks. Their hair is very coarse and brittle and stands on end providing excellent insulation. This adaption has taken place because they generally live in areas with wide temperature variation, heat in the day and cold temperatures at night.

“One can never consent to creep when one feels an impulse to soar.”

One of the signature species on the estate are a pair of Black Eagles.  The last time I was photographing these Black Eagles they had a chick which was standing but had not yet grown its feathers. Last weekend the female Black Eagle was busy relining her nest in preparation for the next brood. 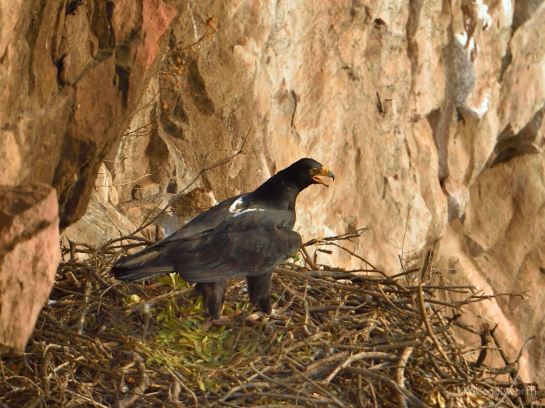 The nest was about 100 metres up on a sheer sandstone cliff face. They do this to minimise predation from baboons and other nimble cliff climbers. 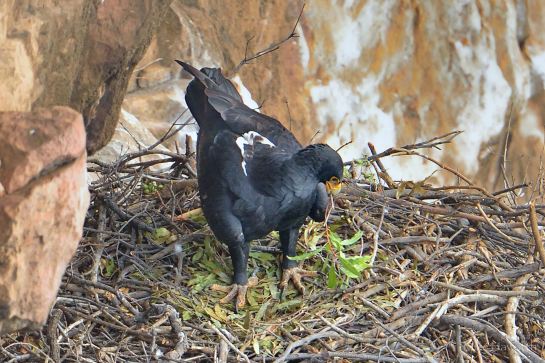 Having positioned the green leaves in the right place the female would sit in the nest to flatten the leaves.

Even though I was a good fifty plus metres away she was very wary of me perched on top of the rocks. 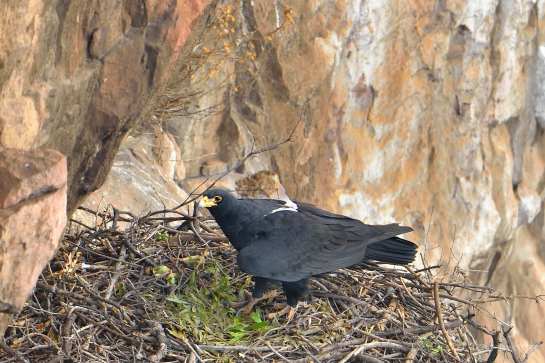 She flew back and forth a few times collecting dead branches and free leaves for the nest. 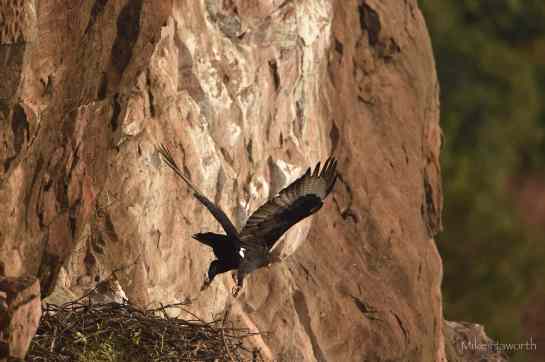 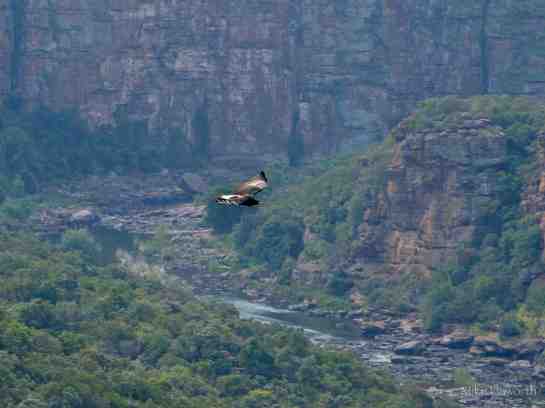 I have included the next image of a male Black Eagle standing as sentinel on a jutting sandstone rock in a steep cliff close to the pair’s nest. It gives a sense of the steepness of the cliff face.

“The eagle likes to fly above the world, not to look down on people, but to encourage them to look up.”

Watching these Eagles fly by is a real thrill especially when they tuck their wings in and tip into a dive.

This female was carrying nest material back to reinforce the existing nest structure. 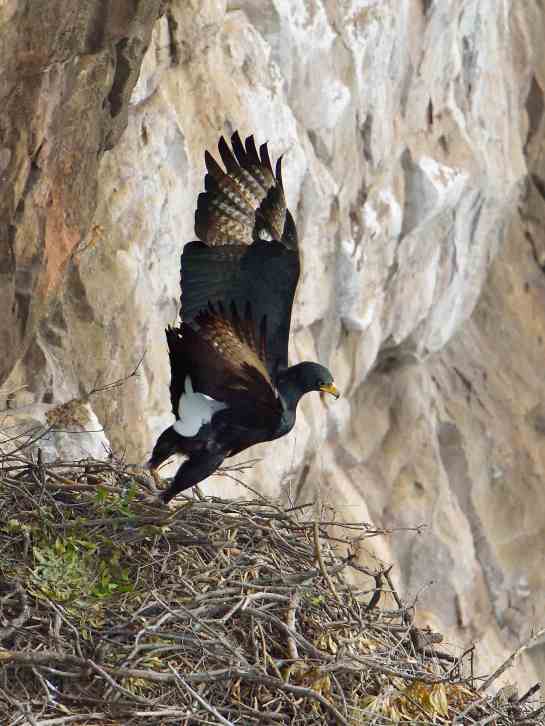 Once they extend their wings they are impressive raptors. Their Black and white colouration makes them even more dramatic.

The Black Eagles dominate the cliffs, but they do not get it all their own way as a pair of Lanner and Peregrine Falcons also nest on this cliff complex. Needless to say, every now and then the Lanners and Peregrines give the Black Eagles a “rev” by dive bombing them but usually well away from the cliff face.

Away from the cliff faces on the flat open grasslands we came across this Cape Longclaw or Orange-throated Longclaw. It is a passerine bird in the family Motacillidae, which comprises the Longclaws, Pipits and Wagtails. It occurs in Southern Africa in Zimbabwe and southern and eastern South Africa. This species is found in coastal and mountain grassland, often near water.The Cape Longclaw is usually found in pairs throughout the year. It feeds on the ground on insects and seeds. 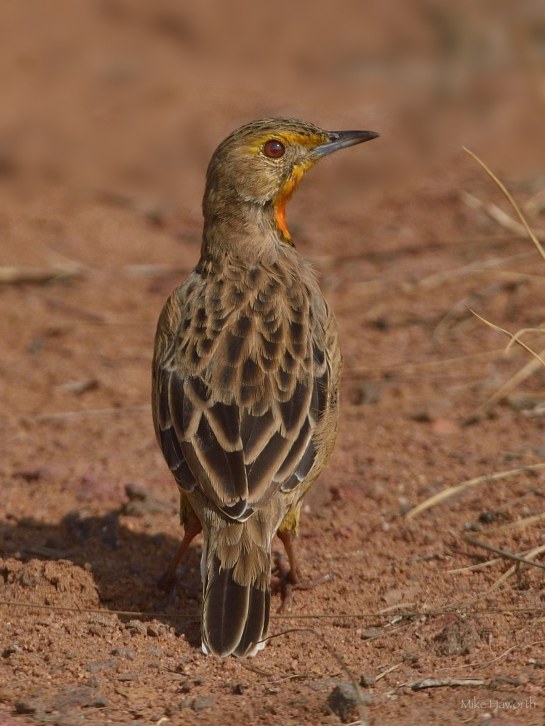 Other than Klipspringers there are a number of other herbivores on the estate. There are Zebra, Black Wildebeest, Impala, Eland, Duikers and Springbok. There are also Blesbok but I have not seen them recently. The Zebra breed successfully as there are no big cats on the estate other than Leopards. The smaller antelope are more threatened by Leopard predation. 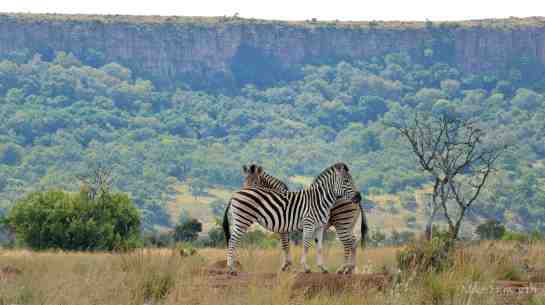 The Black Wildebeest are very wary and will not let you get close so a long lens is needed. 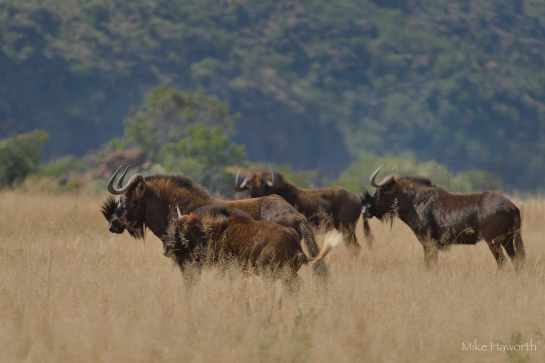 The vistas on the estate are exceptional and there is an incredible diversity of flora. The latter character is the result of no farming taking place on the estate as it is too rocky for crop farming and the grasses are not suitable for cattle ranching. 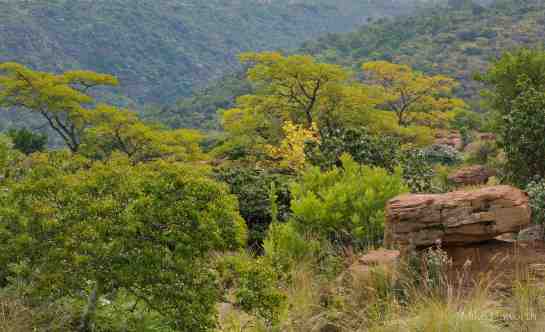 This is the view looking west from Bill and Judy’s lodge. You look over the indigenous flora at a massive sandstone cliff face. The sandstone cliffs have white markings because vultures used to inhabit the cliffs many years ago. At night you do not see any lights – bliss!!!

I have never been downstream along the Olifants river from here but looking at a contour map it looks to be a rugged valley all the way down to the Loskop dam. I am very grateful to Bill and Judy for the opportunity to spend time with them out at Eagle’s Rock estate and the opportunity to photograph unusual wildlife subjects.

“If future generations are to remember us with gratitude rather than contempt, we must leave them something more than the miracles of technology. We must leave them a glimpse of the world as it was in the beginning, not just after we got through with it.”

“We must not only protect the country side and save it from destruction, we must restore what has been destroyed and salvage the beauty and charm of our cities … Once our natural splendor is destroyed, it can never be recaptured. And once man can no longer walk with beauty or wonder at nature, his spirit will wither and his sustenance be wasted.”

– Lyndon B. Johnson   President of the United States