This is the second post from my recent trip to Mashatu in February 2015.

“Our relationship with nature is more one of being than having.  We are nature: we do not have nature.”

On our first afternoon in Mashatu we were privileged to see this young Leopard. It was late after 17h00 and she was walking through the croton grove next to the Majale river. She stopped several times to smell scent marked signposts. I was struggling to get a clear image of her with a suitable background when all of sudden she jumped up into the fallen branch of a Mashatu tree. 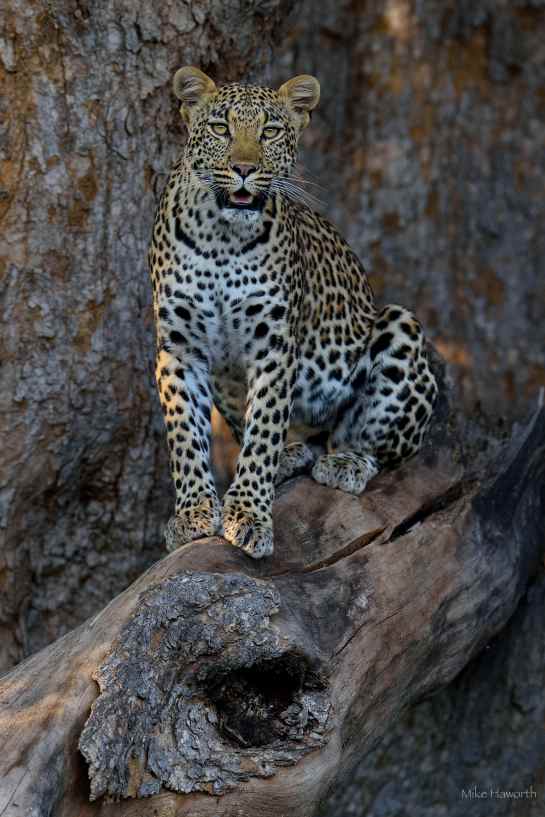 You can see she was alert to all the sights, sounds and scents wafting around her. 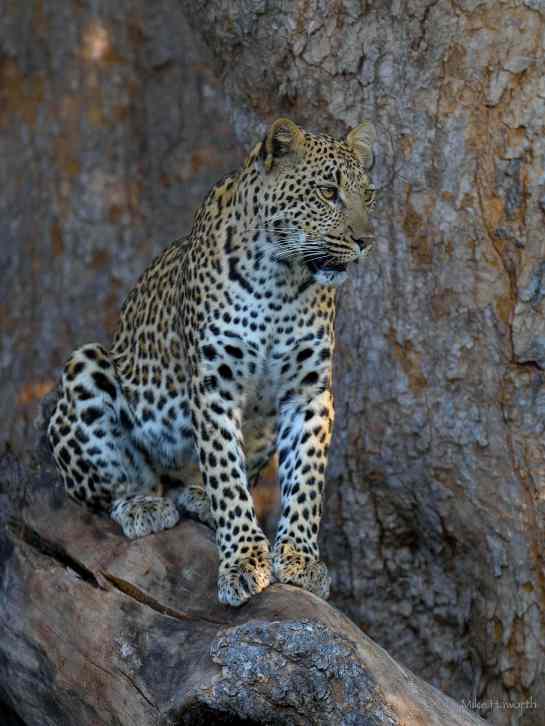 Tree squirrels are quick to alert everything in the bush that they have seen a Leopard. She looked up to see if it was worthwhile silencing the irritation.

Rather than waste energy, this young Leopard decided to carry on with her walk in the cool of the evening. Surprisingly, she walked out of the croton thicket next to the river up to a stoney hillock, probably to get a better view of possibilities and plan her evening’s hunting. 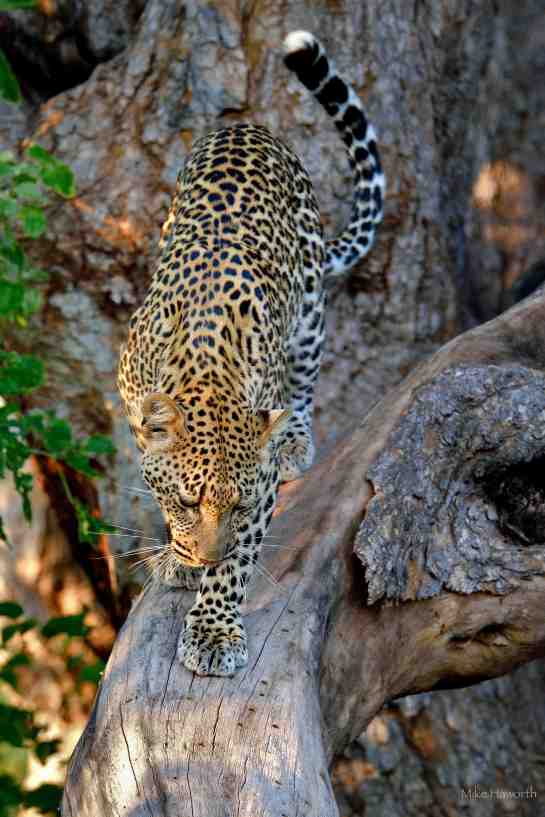 The thrill of watching these solitary, camouflage experts is something I will never tire of.

“What is life? It is the flash of a firefly in the night.  It is the breath of a buffalo in the winter time.  It is the little shadow which runs across the grass and loses itself in the Sunset.”

In summer, the vegetation is thicker, there is more water and the game is more dispersed so you should consider yourself lucky if you see a Leopard. Winter is usually much better time to see these elusive predators.

Luck was with us as the next morning, we spent around an hour watching this beautiful female Leopard walking along the river bed. It is very unusual to see a Leopard in the open, let alone be allowed to watch her walk along a riverbed for such a long time – thank you. 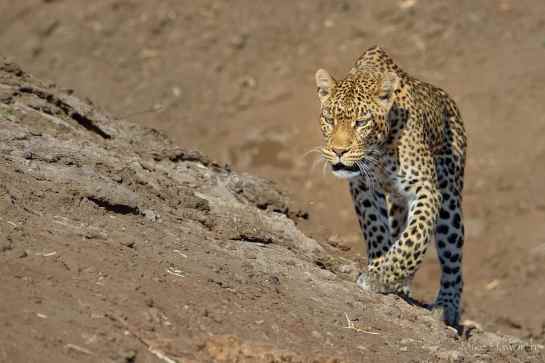 I graciously acknowledge the privilege of being able to watch this female Leopard walking along the river but the lighting conditions were so variable that photographing her was a challenge, both in terms of exposure and white balance, as the shadows tend to have a blue cast.

The perspective of this Leopard walking on the top of the river bank was ideal, but the lighting was complicated as she walked mainly in the shadows under the trees. 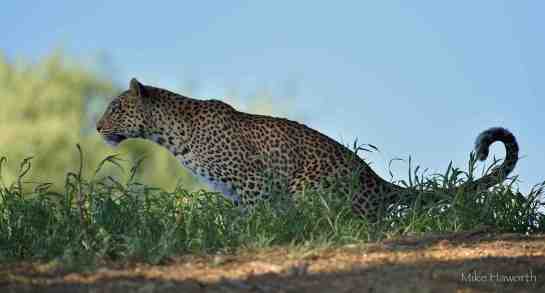 At times, this Leopard walked on top of the river bank and at other times she hugged the far bank of the riverbed. She stopped often to smell the grass and rub her neck, back and tail along the grass, probably scent marking. 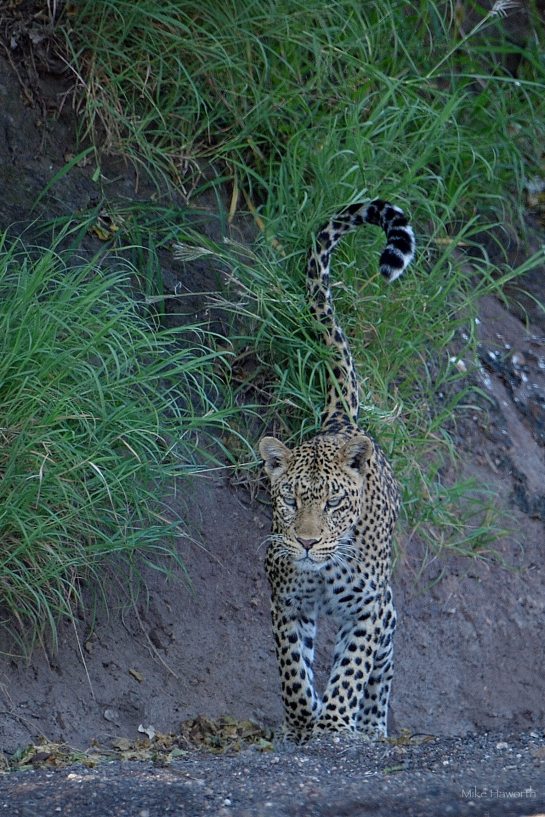 The next few images show the Leopard walking along the riverbed 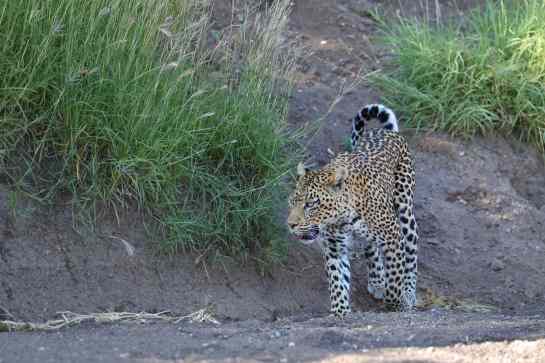 She exuded a confidence borne out of experience and an intimate knowledge of this area. 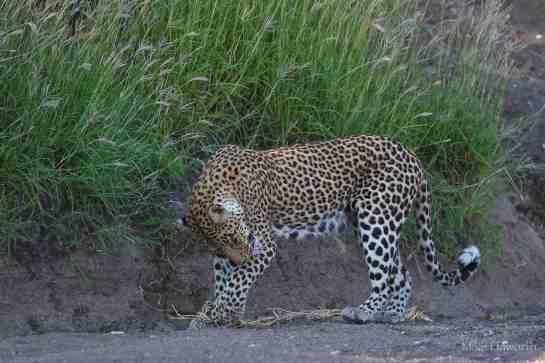 ” I would feel more optimistic about a bright future for man if he spent less time proving he can outwit Nature and more time tasting her sweetness and respecting her seniority.”

It was cool in the shade along the river bank, but not cold.

The next image shows a typical scene of this Leopard as she walked along the edge of the riverbed.

There was clearly much more information in the grass on the bank of the riverbed than we were aware of. She stopped often to smell and ponder, almost as if she was deciphering the message, before leaving her scent and moving on.

The dappled light on this Leopard, as she walked along the edge of the riverbed, was beautiful but difficult to capture well. 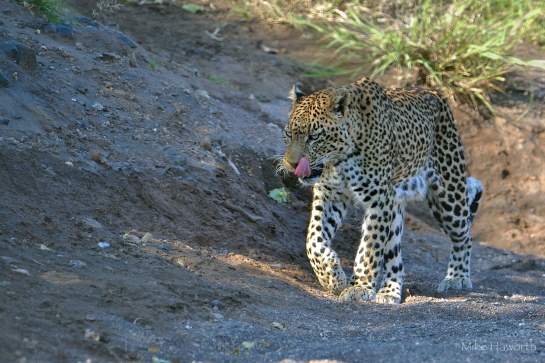 Being summer, there were lots of insects some of which were buzzing around her face which irritated her.

This Leopard had the most beautiful, piercing green eyes.

“There is no other door to knowledge than the door nature opens; there is no truth except the truths we discover in nature.” 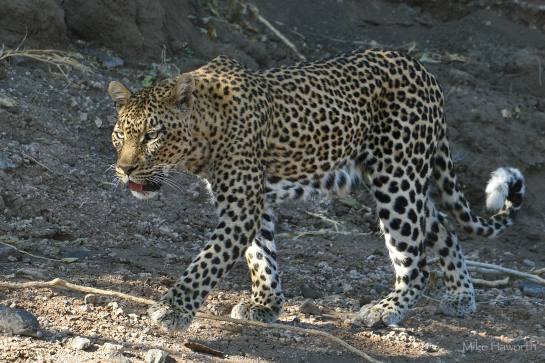 If she were to stop and lie flat in the riverbed you probably would not see her, as she would be so well camouflaged.

We were all in awe and captivated for an hour. It was wonderful to watch this relaxed, but alert, female patrol along a riverbed at around 8h00 in the morning. Our ranger Mollman reckoned she might have been returning to a cub which she had left somewhere along the river. We never got to see whether he was right. We were thankful for the incredible sighting and wanted to leave her in peace.

“Wonderful how completely everything in wild nature fits into us, as if truly part and parent of us.  The sun shines not on us, but in us.  The rivers flow not past, but through us, thrilling, tingling, vibrating every fibre and cell of the substance of our bodies, making them glide and sing.”