This is the fifth post from my trip with CNP to the Masai Mara in early January. The main purpose of the trip was to photographic wildlife and the “big cats” in particular. We were interested in seeing how good the photographic opportunities were outside the Wildebeest migration season. The first four posts were about predators and the “big cats” in particular. I intend posting four more series of photographs and stories from this trip. This post will show some of the birds we saw while following the “big cats”. The next post will show scenery and silhouettes. The second last post of the Mara 2015 trip will show a day in the life of two Cheetah males. The last post will show a variety of images in black and white.

“Give me the storm and tempest of thought and action, rather than the dead calm of ignorance and faith! Banish me from Eden when you will; but first let me eat of the fruit of the tree of knowledge!”
― Robert G. Ingersoll

East Africa is a birder’s paradise. The field guide ” Birds of East Africa” documents 1388 birds in the Kenya, Uganda, Tanzania, Rwanda and Burundi area. Although the tented camp, Kitchwa Tembo , was situated in an indigenous forest but we did not try to photograph the birds in the forest because that was not our focus and the heavily overcast weather substantially reduced the available light in the forest.

The birds we saw but were not able to not photograph were the Black and White Casqued Hornbill feeding on the figs in the camp. There is a wonderful group of some 15 different beautifully coloured Barbets in this region but they eluded us. We saw a flock of Schalow’s Turacos cavorting in the fig tree above our breakfast table. There were lots of Common Bulbuls and White-backed Mousebirds in the camp. As you can hear I am angling toward a bird photography trip next to see the extra-ordinary variety of Shrikes, Weavers, Rollers, Bee-eaters, Sunbirds and Barbets to mention just a few.

The birds we did photograph were those mainly in the open grasslands which we saw while looking for the “big cats”. There are many different types of herbivores in the open grasslands such as Eland, Zebra, Topi, Buffaloes, Giraffe, Waterbuck, Thompson and Grants Gazelle, Impala and of course, Elephant and Hippo. I did not see any of the Bohor’s Reedbuck this time. Where there are herbivores there are Oxpeckers. Unlike SA, where we mainly see Red-billed Oxpeckers, in the Mara you will find mostly Yellow-billed Oxpeckers. These health workers have plenty of clients to work on. 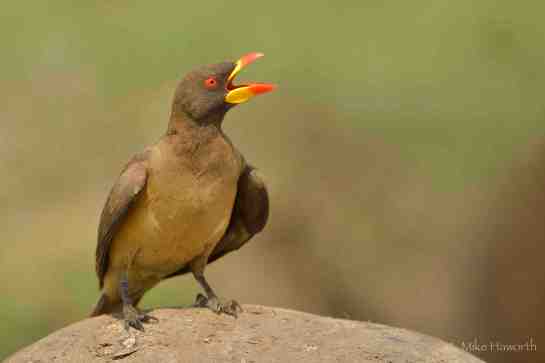 These two Yellow-billed Oxpeckers were sunning themselves on a large Buffalo’s boss.

Double click on the image with a blue border and you will be taken to the Xeno Canto website. Click on the right pointing triangle at the top left hand side of the list and you will hear that bird’s call. Hit the back arrow key on your browser to return to this post.

One bird you will commonly see in the Mara is the Grey-crowned Crane. We never saw them in flocks, only in pairs which were widely scattered. They forage in the grasslands for insects and grass seeds. I never fail to marvel at the exquisite beauty of these birds.

“Cranes are ubiquitous in the earliest legends of the world’s peoples, where they often figure as sentinels of heaven and omens of longevity and good fortune.”

That Golden Crest of specialised feathers is something exquisite!! Mother nature has an ability to put colours and textures together which work, and must be the envy of any fashion designer.

Grey-crowned Cranes are quite vocal with there distinctive croaking call. 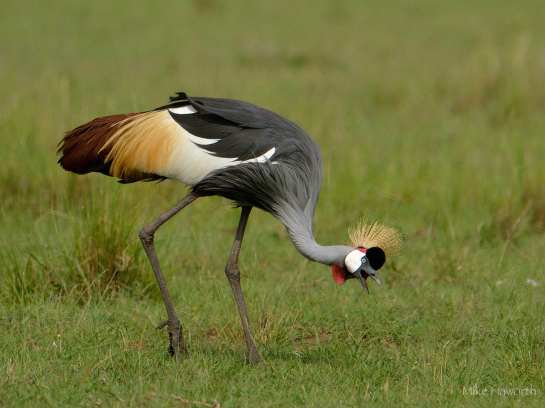 Black-headed Heron were ubiquitous in the Mara. There were many places in grasslands which had filled with rainwater. These provided the Herons with plenty of food from frogs to Terrapins. Once they see their prey, they can stand motionless for a long while watching and waiting for the prey to move closer. They then start to weave their head left and right in what looks like a hunting ritual.   The weaving of the head  from side to side to thought be assist the Heron more accurately estimate the position of the prey in the water, enabling it to compensate for refraction in the water. The Heron then uses its bill to spear its prey.

While we were looking around the marsh area in the Masai Mara reserve down near the Mara river, we came across two Lapwings which I had never seen before. The first was this Senegal Lapwing which never stopped for us to get a decent image of it. There was a small group of five or six.

The second new Lapwing, for me, was the Spur-winged Lapwing. This character was much more accommodating mainly because it was looking for insects in the old Elephant dung in the middle of the road. 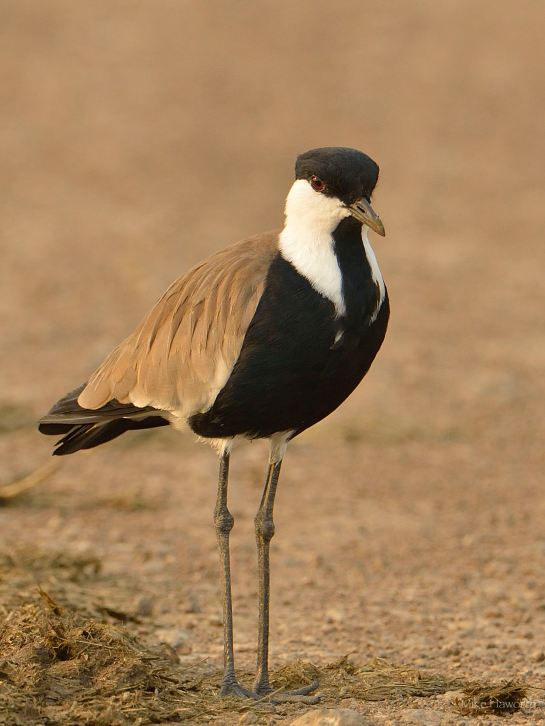 This Spur-winged Lapwing paraded around in front of us for about five minutes.

“It is the soul that sees; the outward eyes
Present the object, but the Mind descries.
We see nothing till we truly understand it.”
― John Constable

While we were watching the Cheetah males, a pair of Temmnick’s Coursers ran in front of us. You don’t often seen them. I have only ever seen them before in Mashatu, Botswana. They were very busy scurrying around looking for insects in the grass.

The heavy duty clean up crew were coming in. This Lappet-faced Vulture banked sharply for a grand entrance to partake in cleaning up the remains of a Hippo calf.

The air space was getting busy as more Vultures arrived. A pair of Hooded Vultures coming in on finals.

The Hooded Vulture are much smaller than either the White-headed or the massive Lappet-faced Vulture. The Hooded Vulture tends to lurk around the periphery of a kill skirmishing for scraps rather than competing on the main carcass.

We only saw three Vultures close up and that was on the first day. The Hooded, White-headed and Lappet-faced Vultures flew in to pick at the remains of a Hippo calf close to the airstrip. It is only when you see them together do you get a real sense of relative size and their hierarchy at a kill. I was surprised how big the White-headed Vulture was which in turn was much bigger than a Hooded Vulture. The White-headed and Lappet-faced Vultures tucked into the remains while the Hooded Vulture remained on the fringes of the carcass. 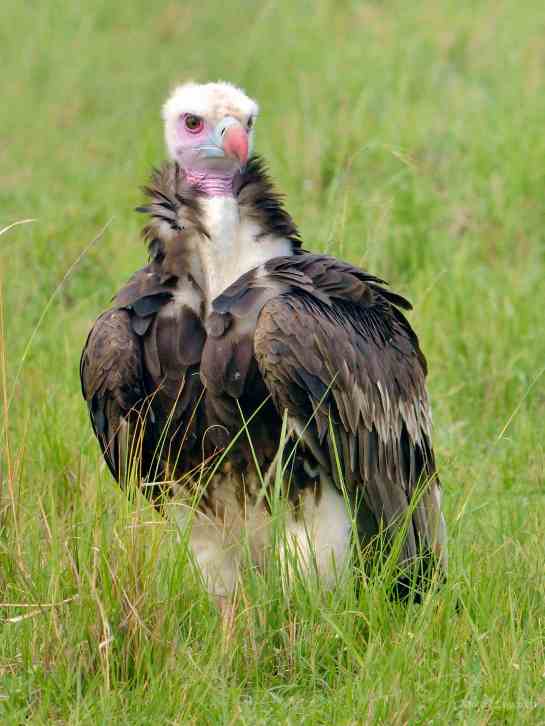 “The concept of conservation is a far truer sign of civilisation than that spoilation of a continent which we once confused with progress.”

The open grasslands are paradise for the Larks, the most common of which are the Rufous-naped and Flappet Larks. The Rufous-naped Larks are ubiquitous and the males seem to love having their photograph taken. In the open grassland they either sit on top of a small bush or anthill and advertise their availability and prowness.

This Rufous-naped Lark must have been a male as he was displaying to all the passing females. We were also giving this casanova the attention he was seeking. 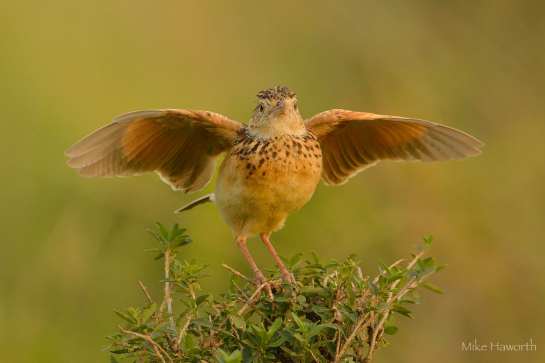 The haze reduced the contrast allowing us to achieve reasonable detail in the dark tones. This Southern Ground-hornbill had a very successful feeding session thanks to the Elephants. 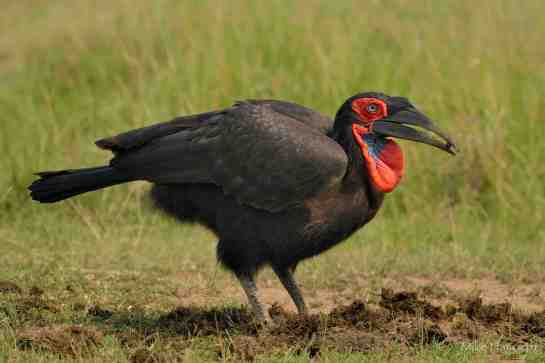 Another bird seen regularly foraging on the open grasslands is the Secretary Bird. It strides out across the grasslands looking for insects, rodents, frogs and small birds. These raptors are not big tasters. They grab their prey usually with their feet, stomp it into submission and swallow it whole, often still alive. The distance they can cover while striding can be quite remarkable.

Those long scaly legs protect them from snake bites. Their feet are clawed and have thick hard pads underneath. They use their feet to stomp on prey, often pounding it to death. 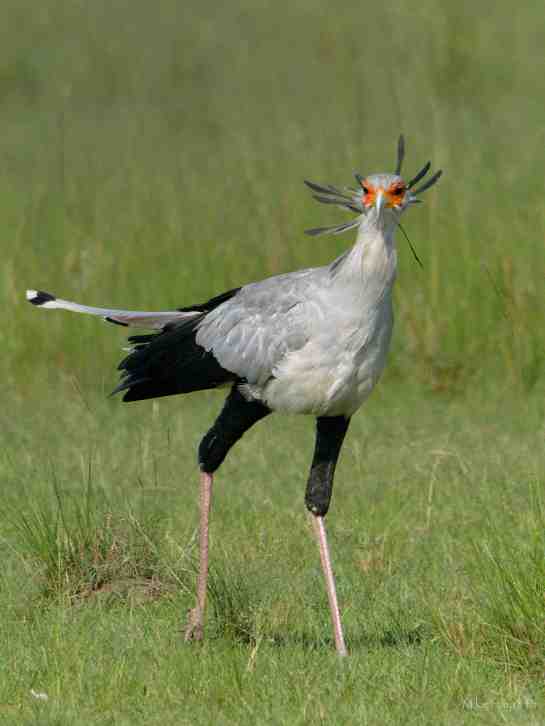 This is a small selection of the huge variety of avians which can be seen in the Mara. This reserve is a real Eden of wildlife.

“Soon the child’s eye is clouded over by ideas and opinions, preconceptions and abstractions. Simple free being becomes encrusted with the burdensome armour of the ego. Not until years later does an instinct come that a vital sense of mystery has been withdrawn. The sun glints through the pines, and the heart is pierced in a moment of beauty and strange pain, like a memory of paradise. After that day….we become seekers.”