Happy New Year – I wish you a year filled with interesting people, unusual adventures, far away places and new insights.

“Life is a daring adventure, or nothing.”

We stayed at Kitchwa Tembo tented camp. It is a wonderful tented camp, very comfortable with a view straight onto its Conservancy which is around 10 square kilometres at the north-east end of the Mara triangle. The beauty of the conservancy is that it is not part of the main park so we could drive off-road. This was important as we could get into position to minimise grass in front of the subject and to get the most favourable light direction, which was usually behind us.

“Masai Mara is probably the most famous of the reserves and is located in Kenya’s south western corner and boasts an astonishing amount of game. The national reserve is unfenced, with the Mara being bounded in the east by the Ngama Hills and in the west by the Oloololo Escarpment.

Gazelle, Wildebeest and Zebra graze in large numbers and attract many and varied predators.  The wide green-gold savannahs are spotted with thorn trees.”

After an easy flight from Nairobi to the Masai Mara we set off on our first bush drive the afternoon of our first day. We heard that “Scar” the male lion with a damaged right eye had killed a Hippo calf the day before on an open area close to the airstrip, so we travelled down to see what we could find. In no time at all we found a few Hyaenas and Vultures on the remains of the reported Hippo calf. We found three vultures picking at the bones. Each vulture was a different species, Lappet-faced, White-headed and Hooded. The next image is of a White-headed Vulture gliding in to feast on the Hippo calf.

The White-headed Vulture is large, not much smaller than the Lappet-faced, and is one of the more strikingly coloured of the three Vultures we saw that afternoon.

Vultures have amazing vision. Once they see other Vultures landing they know there is a kill or food of some sort which is worth investigating. Shortly after the arrival of the White-headed Vulture, the massive Lappet-facerd Vulture flew in. The Lappet-faced is usually the first to open a carcass, if it has not be already opened up by a predator.

“The earth has music for those who listen.”

It did not take long before the Black-backed Jackal saw the Vultures flying in and came over to see what was available. The next image shows the Lappet-faced Vulture dominating the Jackal. He went hungry that afternoon.

A pair of Hooded Vultures joined the party. Being such smaller than the Lappet-faced and White-headed Vultures they operated on the fringes of the carcass area minding not to get too close to the other Vultures. This Vulture is more of an opportunist when there are larger Vultures and predators feeding on the carcass, darting in to snatch scraps.

The Hyaenas never fail to miss an opportunity to feed. The Vultures and Jackal attracted the attention of two Hyaenas. 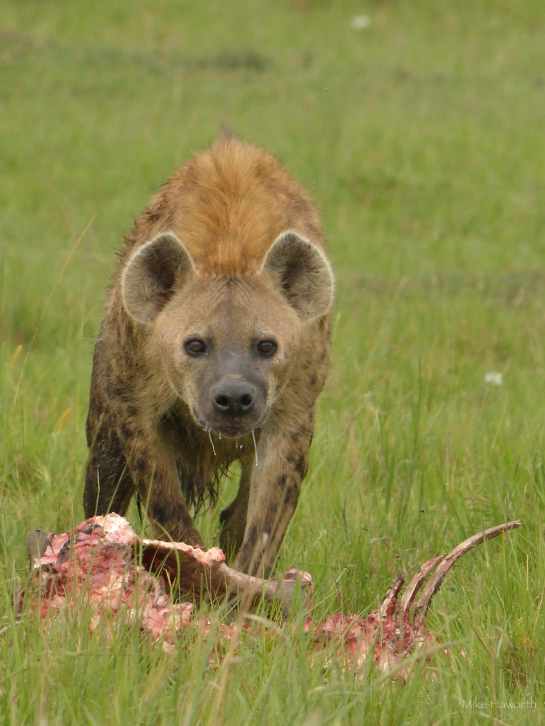 It was amazing how far and fast the Hyaena ran with what looked to be a heavy mouthful.

This was another example of the strength and endurance of these top predators. The Hyaena was quite capable of eating the remaining bones.

A pair of Topis were watching the Hyaena with a keen eye. A Topi looks like Hartebeest and belong to the same family but are a different species. 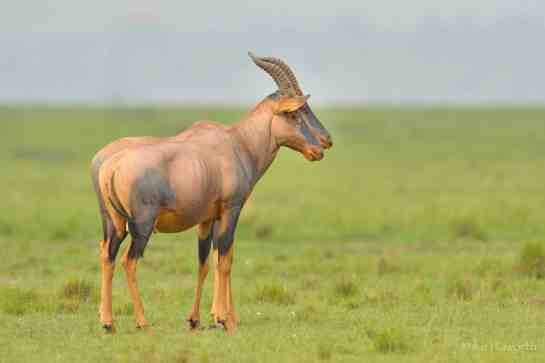 Topis are very fast, so Lions and Hyaenas struggle to catch them during the day. They are most vulnerable at night when they sleep. Most Topis are attacked and killed by Hyaenas when they are asleep.

” There is something about safari life which makes you forget about all your sorrows and makes you feel as if you had drunk half a bottle of champagne – bubbling over with heart-felt gratitude for being alive.”

We saw our first Lion pride within an hour of being on the Conservancy. This was part of the “Marsh ” pride. This pride comprises around 28 Lions and is ruled by a coalition of four large males, “Scar” and his three brothers. Half the pride and three males had crossed the Mara river into the Conservancy, the other half of the pride remained on the eastern side of the Mara river. The next image shows a few of the Lionesses with their cubs resting on a mound near the airstrip in the late afternoon.

This pride was operating in the Conservancy less than a kilometre in front of the camp. Needless to say that first night we went to sleep with a chorus of Hyaena “whoops” and Lion “roars” and the odd Hippo “grunts”.

The Lionesses were very alert and looked ready to hunt in daylight hours.

A typical scene, in the Mara area.

We got off to a good start on our first afternoon. The Mara was looking very green. In the Conservancy area the grass was not too long so we were excited about the potential photography in the days ahead. The Mara is full of animals at this time of the year but the Wildebeest migration is down in the south part of the Serengeti in preparation for the calving season in February and early March.

One of the reasons we undertook this trip was to see what the photography was like outside the Wildebeest migration. After the first afternoon it was looking good.

“When we contemplate the whole globe as one great dewdrop, striped and dotted with continents and islands, flying through space with other stars all singing and shining together as one, the whole universe appears as an infinite storm of beauty.”