This is the last post from my recent trip with Coetzer Nature Photography (CNP) in mid-March on the Chobe River. This post shows a selection of Kingfishers which we photographed along the Chobe River.

Kingfishers are a group of brightly coloured, small to medium-sized birds. There are about 90 species of Kingfisher, worldwide. They all have large heads, sharp, pointed and long beaks, short and wide wings, short legs, and stubby tails. Kingfishers nest in burrows, which are usually tunnelled into the natural river banks. In Africa, the smallest species is the African Dwarf Kingfisher, weighing in at just over 10 grams and the largest is the Giant Kingfisher, which weighs in at around  350 grams.

Civilization no longer needs to open up wilderness; it needs wilderness to help open up the still largely unexplored human mind.

The main focus of this post is to show you some images of Kingfishers taken along the Chobe river from CNP’s exceptional floating photographic platform. There are some features about Kingfishers which are I think are remarkable and want to share with you. I discuss these features at the end of this post.

We start with the smallest and work up in size. We did not see any Pygmy Kingfishers, which are identified by their very small size and the mauve ear coverts. These little gems are usually found in woodland areas where they hunt for insects. These midgets are uncommon. The African Pygmy Kingfisher is approximately 12–13 cm in length. It is a very small Kingfisher with rufous underparts and a blue back extending down to the tail. The dark blue crown of the adult separates it from the African Dwarf Kingfisher. The smaller size and mauve wash on the ear coverts distinguish it from the similar Malachite Kingfisher.

Much more common is the Malachite Kingfisher. These minute Kingfishers sparkle in the sunlight. They are excellent fishermen and usually hunt from a reed or branch overhanging the water. They fly at great speed between perches and dive into the water blindingly fast without hurting themselves. We usually see them along the reed beds of the island which splits the river just upstream of the lodges, especially on that part of the river as you return to the lodges passed the Namibian stilt village.

These Kingfishers are only slightly larger than the Pygmy Kingfisher but are conspicuous because of their gem-like vibrant royal-blue coloured back and nape feathers.

We were fortunate to see Grey-headed Kingfishers on two occasions. These elegant little Kingfishers are not often seen along the river as they are insectivores which feed in the woodland areas much like the Pygmy Kingfishers.

The Brown-hooded Kingfisher is about 20% larger than the Grey-headed Kingfisher. It is commonly found along the Chobe river. It is also mainly an insectivore but will occasionally catch fish.

We did not see any Striped Kingfishers although they are resident along the river. They are slightly smaller than the Brown-hooded Kingfisher and have striped breast feathers and a dual-coloured bill, black upper mandible and red lower mandible.

We did not get to see any Half-collared Kingfishers either but there are  two pairs which frequent the branches and reeds overhanging  the river around the Chobe Safari lodge.

The Woodland Kingfisher has stunning cobalt blue back, tail and primary wing feathers. The male and female look the same. Their trilling call is ubiquitous in the woodland areas along the Chobe river. These are also insectivores.

The Mangrove Kingfisher superficially looks like the Woodland but is only found in the mangrove swamps along the coats and does not have the same black eye strip and its head and neck is greyer.

The Pied Kingfishers were very successful hunters on the river. The male and female have similar colouring but there breast patterns are different. The female has black bra cups and the male a black waistcoat. 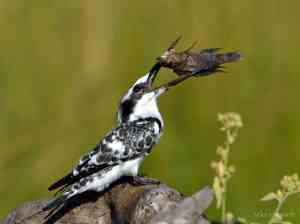 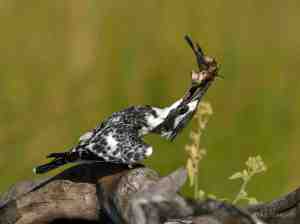 One of the things which always surprises me is how these Kingfishers manage to swallow such large prey without choking. 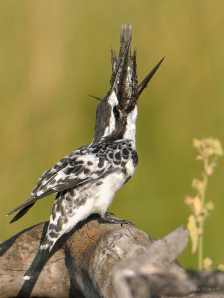 The Giant and Half-collared Kingfishers are perch hunters, though the Giant is known to hover but not for long and not without a reasonable headwind. The only Kingfisher which regularly hovers is the Pied. You will notice that the Pied Kingfisher keeps its head absolutely still while hovering to establish pin-point accuracy before diving. Pied Kingfishers usually dive with the sun behind them making it more difficult for their prey so see them properly. I have never been close or quick enough to see it, but Trevor Carnaby’s “Beat about the Bush – birds” indicates that Kingfishers keep their eyes open during the dive. The long bill acts like a rifle sight and the Kingfisher has a unique eye structure to accommodate the shock wave when entering the water. Their nictitating membrane covers their eyeballs like built-in goggles. Once in the water the Kingfisher snatches it quarry in its bill rather than stabbing it. 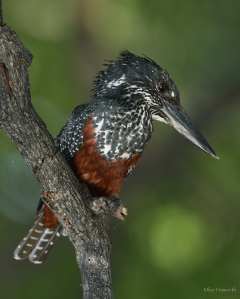 We did not get close enough to get great shots of Giant Kingfishers during our five days on the Chobe river but they are much more active in the summer months .

The earth has music for those who listen.

Kingfishers are some of the most brightly coloured birds along the river alongside the bee-eaters. These are stunningly adorned birds, but these remarkable birds also have some of the most fascinating natural adaptions.

Hunting: As their name suggests they are associated with hunting and eating fish. While some species specialise in catching fish, many feed on insects, crabs, small reptiles and worms. Kingfishers catch their prey between their mandibles rather than harpoon their prey. Once they have caught their prey they usually fly to a perch and beat it to death against the branch or rock. This helps break up insect coats, small fish bones, and invertebrate exoskeletons.

Most Kingfishers hunt from a perch and are highly territorial.

Presumably, a Kingfisher will sight its prey with the higher acuity nasal monocular fovea. As the bird drops towards its prey, acuity becomes less critical but the ability to see prey movement, especially in the three dimensional world of water, becomes paramount. The infula or visual streak which connects the two foveae allows the image to swing temporally as the bird drops onto the prey, and if the prey moves, the temporal fovea senses the difference in position and the Kingfisher can adjust accordingly. Their twin fovea allow them to very accurately judge the distance to a prey item by turning their head slightly.

Many avian species that must look through water for their prey, such as Kingfishers, have a preponderance of red oil droplets. The reason red droplets predominate is not understood, but it is thought that the droplets may help with the glare or the dispersion of light from particulate matter in the water.

Hovering: When hovering 12–15 metres above their prey, Pied Kingfishers have an unusual problem. The simultaneous movement of the fish and of the bird as it hovers would normally create a neurological nightmare. The solution produces a dramatic real life aerial dance for those who have witnessed it. The Pied Kingfisher is the only species that is mainly pelagic, and during its hover before the plunge-dive it keeps its head rock steady relative to the movements of wing and body. Curiously, the depth of the prey will vary the form of the plunge-dive. The deeper the prey, the steeper the dive angle (with achieved speed as high as 4.5 m/s), perhaps to reduce the effects of refraction on the apparent position of the prey.

In order to remain in sync with the fish’s exact co-ordinates the Kingfisher must keep its head almost entirely motionless, allowing the wings and counterbalancing tail do all the work. When ready the Kingfisher strikes, performing a controlled vertical dive to ensure its dart-like bill is the first thing to enter the water. Though sharp and streamlined, it still generates shockwaves through the water that can startle a fish, so speed is of the essence. The difference between the Kingfisher catching its prize or not can come down to a matter of a mere 50th of a second! If the fish reacts within that time, it is likely to dart out of harm’s way and the hunter will go hungry.

Environmental conditions affect which type of fishing behaviour birds use. In windier conditions, the Pied will use hover-plunge most of the time and perch-plunge  when conditions are calm and where there are available perches.

Long beaks: Kingfishers’  long, dagger-like bills are functionally more like rifle sights than harpoons. The shape of the Kingfisher’s beak is perfectly adapted for penetrating the water at high speed without creating a massive turbulence which would reduce the hunting success rate.  They prefer to hunt over still or slow moving water using a favourite perch to scan the shallows for small fish. They rely on their eyesight to help them accurately target a fish, then dive beneath the surface to catch it.

The Grey-headed, Mangrove Malachite and Pygmy Kingfishers have red beaks, while the Half-collared, Pied and Giant Kingfishers have black beaks. The Woodland and Striped Kingfishers have a black upper mandible and red lower mandible. I am still trying to find out the reason for these colouration differences. My initial thoughts are the aquatic Kingfishers have the black bills to reduce glare, but I am not sure.

Feet: While their hunting adaptations are amazing, the Kingfisher’s strangest adaptation is used for digging its nest burrow in a sandy embankment.  Kingfishers use the beaks are their primary digging instruments but their inner two toes are fused together, resulting in what appears be a single flattened toe, which helps with the scrapping of dirt out of the tunnel. This toe characteristic is called syndactyly. It is uncommon and only shared with kangaroos, wallabies, opossums, koalas and wombats.

Biomimicry: After several failed attempts to sufficiently mitigate the noise of high-speed trains, the designers took a cue from nature. Noting that the usual shape of the Kingfisher’s head, large with a long, narrow bill, which enabled it to dive from the air into the water with minimal splashing. The designers ran a series of wind tunnel tests, ultimately concluding that the design of the kingfisher’s bill was ideal for transitioning from air to water, and could also be used for reducing the air friction and sonic boom caused by speeding trains moving into and out of tunnels. Mimicking the design of the Kingfisher for the nose cone of future train engines, the Shinkansen trains have successfully overcome the problem of compliance with Japan’s strict noise pollution standards.  By looking at the wonders of nature, which is always all around us, the bullet train designers were able to take the lessons they had learned and solve an important problem. It makes you wonder what other problems have answers to be found in nature, right in front of our eyes and just waiting to be discovered.

Preen oil: Like ducks and other waterbirds, the feathers of a Kingfisher are smeared with a special preen oil that helps to keep them waterproof when diving into the water. After any activity which might make feathers dirty, like digging a nest burrow in a sandy bank, they always take a quick bath to keep their feathers in good condition.

As you can see there is much more to our feather fishers than meets the eye.

The voyage of discovery is not in seeking new landscapes but in having new eyes.

Seek to understand nature, marvel at its interconnectedness and then let it be

2 thoughts on “Royal fish hunters along the Chobe”