I trust you had a wonderful Christmas holiday surrounded by your family and friends. 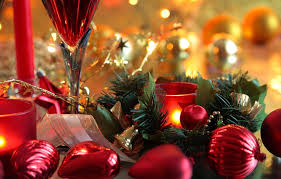 In between trips, I will try to post new mammal, reptile, insect and birds categories. This is a perpetual quest to not only expand the diversity of wildlife categories but also to improve the quality of the images and attempt to show the inter-relatedness of the wildlife. Of course the only way to do this is to get into the bush. It is Christmas time so bush trips must wait until the new year. I have been very privileged to have gone on a number of photographic trips in 2013 – it was a good year. The photography was fantastic but I know it will get better next year.

In the meantime, I am adding three new categories – all ground birds.

The first category is Coursers. These birds look a bit like Pratincoles with long legs. There are five species of Courser in southern Africa. The Bronze-winged and Three-banded Coursers are nocturnal and the Double-banded Courser operates both during the day and night. These birds tend to run rather than fly when disturbed. These are terrestrial birds and have long legs which enable them to run down their prey. They prefer open, hot open areas probably because they are mainly insect feeders. As with many terrestrial birds they have no rear toe so they cannot perch.

The Temminck’s Courser is the smallest of the five and does tend to feed during the day. Like many ground birds, the colouring on its back is cryptic (well camouflaged) so when disturbed it turns its back to the disturbance to minimise detection. 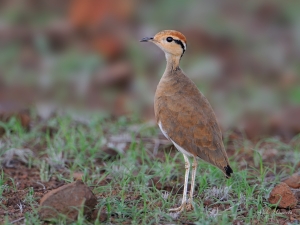 The other Courser I have seen in Mashatu is the Three -banded Courser. This terrestrial bird is nocturnal. The next two images were taken around 9h00 in the mornings so we probably disturbed them as the pair were settling down for the day. The first image is of the male who was very sleepy but stayed some distance away from the female who was protecting her nest. The male looked to be trying to distract us away from the nest. 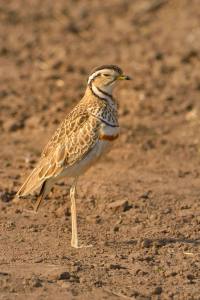 The female remained at the nest

The female was protecting her single egg for us but  probably also from the sun – it was very hot even at mid-morning. The egg was very well camouflaged and could only be seen with a long lens. In fact, the egg is often buried under soft material possibly to protect it from the sun and hide it from predators such as mongooses, genets, servals and snakes such as boomslangs and egg-eaters, The egg, if seen, Harrier-hawks or Sparrowhawks will also predate on the egg. 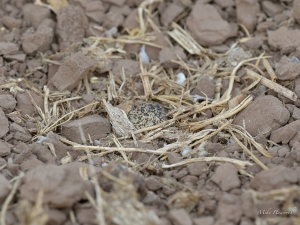 The chicks tend to be precocial when they hatch, meaning they are able to feed themselves from birth. Coursers tend to lay one egg at a time rather than a whole clutch, but will lay a single egg three to four times a year. This presumably increases the egg and chick’s survival rate.

When I manage to capture reasonable images of Burchell’s and Bronze-winged Coursers, I will include them in the Courser category.

I find the diversity of predominately terrestrial birds intriguing as they join the cranes, bustard and Korhaans. Coursers are very good fliers but take to the air when necessary for new feeding grounds or to avoid attack.

There are seven Korhaans in southern Africa. There are the Red-crested, White-bellied, Southern Black and Northern Black, Blue, Ruppells and Karoo Korhaans. Like the Courser and Bustard, the Korhaan tends to prefer open grassland and semi-arid areas. They are essentially terrestrial. Most of the Korhaans are classified as common, with the exception of the White-bellied which can be found in the mid and eastern part of South Africa.  Korhaans tend to be more colourful than the Bustards, especially on their bellies and heads but their backs are cryptically coloured for camouflage. There is sexual dimorphism not in size but colouring. The males tend to have much more colourful necks and heads than their females.

The next image is of a female Red-crested Korhaan. Usually they will turn their backs to you to improve their camouflage. 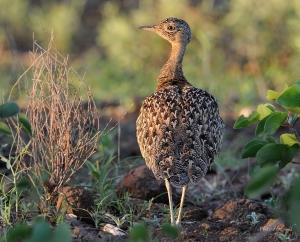 It is always a great challenge and elicits much mirth among fellow wildlife enthusiasts when I try to photograph the male’s aerial display. The lack of aerial display images will attest to my success. When displaying, the male flies up into the air about 20 metres and then freefall to the ground, as if shot . This behaviour is extremely difficult to photograph because you cannot predict where and when the male will jet out of the bush to begin his impressive display.

The next two images are of two different female Red-crested Korhaans. The females look similar to those of the Northern Black Korhaan but they do not have the red-beak of the Northern Black Korhaan. The image also shows the three forward pointing toes, typical of ground birds adapted for walking and running. Without a back toe it cannot grip to perch.

The next image is a male Red-crested Korhaan in Kruger park in January last year. The male is distinguished from the female as it has two white breast patches at the base of its throat as opposed to a continuous white collar in the female. He was well hidden until he started calling.

There are four Bustards in southern Africa, the Kori, Denhams, Ludwigs and Black-belled (previously classified as a Korhaan) Bustard. These large birds can be seen mainly in open bushveld and semi-arid grasslands. These are also a predominately terrestrial birds which can fly when they need to, though their flights seem just to get them out of danger.

The Kori Bustard is this the largest flying bird in southern Africa. Both the male and female are clearly distinguished by their large size and crest on the back of their heads but have is clear sexual dimorphism. This means a difference in form between male and female members of the same species. At around 12 kilograms the male is about twice the weight and about 25% larger than the female. Being much bigger and having marked ornamentation, the male is built for show. The male has a throat pouch which it inflates during courting displays. The courting display looks like that of a Black-belled Bustard with its throat puffed out, wings dropped and tail lifted up and fanned out. The males can get tangled in savage territorial fights. Well-known wildlife photographer Daryl Balfour published, in the June/July 2011 Bird & Birding magazine, an unusual sequence of images of two male Kori Bustards fighting in the Masai Mara. Koris tend to be secretive so those images were exceptional.

Given the size and territoriality, there tend to be a few dominant males which breed. After mating, the females are left to look after the eggs. The female is materially smaller than the male but the colouring is not much different. Only if they were walking close together could you tell the difference.

Being essentially terrestrial birds, they have similar features to the Korhaans and Coursers, having no rear toe so they cannot perch in trees. They also lay one to two eggs in a scrape in the ground. The egg shape looks to be oval with no need for the pyriform shape to keep them in the nest as there are so few eggs. The eggs are well camouflaged for protection. The chicks are also precocial.

The Kori Bustard walks in slow measured strides and always seems to be looking at you with the ‘beady’ eye. If you are lucky you might see one taking a sand bath to get rid of parasites.

When we were in Etosha, I was surprised to see Koris lying down in amongst the rocks near the waterhole until it put its head down, then it was obvious, its camouflage was superb.

I wish you a 2014 filled with interesting trips and fascinating people. I hope you gain new insights, new understandings, and your plans turn out much better than even you expect.

6 thoughts on “Coursers, Korhaans and Bustards”