Our recent trip to Giant’s Castle in the Dragon Mountains, which the Zulus call the “barrier of spears”, was mainly to see unusual raptors such as Bearded Vultures and Cape Vultures. The best place to see these raptors is from the Vulture’s Hide in the Giant’s Castle Reserve.

“Chasing angels or fleeing demons, go to the mountains.”

You will be constantly reminded of the richness of our natural diversity in this great land. Yes, if you are fortunate you will see bearded giants soaring among the castles. You will also see unexpected little gems in the Giant’s Castle.

No this is not a ‘Jack in the Beanstalk’ story and where geese lay golden eggs, or least I could not find any, but there were little avian gems all around.

One such gem is the Red-winged Starling. They frequented both the resort and the hide. The Starlings loved the fat on the bones at the Vulture’s hide. They were no competition for the raptors or the Ravens but got their fill through persistence. 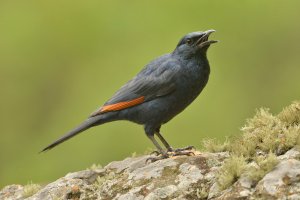 The males have an iridescent black plumage with chestnut-red tips to their flight feathers. Why Mother Nature chose to paint their wingtips red only she knows. Both the males and females have red on the secondary feather wingtips. The females are distinguished from their males by their greyish heads. These are gregarious birds and appear to form pairs. Red-winged Starlings are known to behave like Oxpeckers feeding on ticks and parasites on game.

This starling is a cliff nester, breeding on rocky cliffs, outcrops and gorges. The Red-winged Starling builds a lined nest of grass and twigs, and with a mud base, on a natural or structural ledge.

The one rule in bird life is that size counts. There were many birds busy around the hide. The Familiar Chats were very active but always got out if the way of the Starlings. These cute but nondescript Chats were remarkably successful bug and worm hunters. 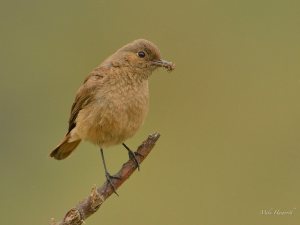 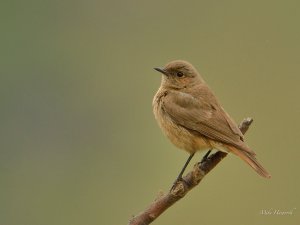 The Familiar Chat is typically seen sitting on a rock. It has a habit of flicking its wings once or twice every time it moves – very chat-like. The Afrikaans name for this species “spekvreter” means “fat-eater”, a name given to it by the Voortrekkers because it was in the habit of feeding on the lard used by the trekkers to grease their wagon axles. The fat on the bones was presumably one of the reasons why we found this little birds at the Vulture’s hide and not at the resort.

Being in the chatting mood, another Chat which was very active around the hide was the Buff-streaked Chat.

There was only one pair at the hide and were instantly recognisable because the male has such striking colouring. 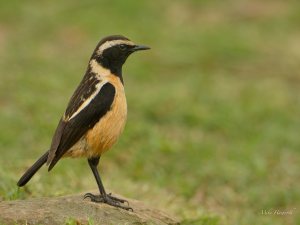 I was very surprised to see male and female Malachite Sunbirds up on the cliff edge around the hide. In fact, many Sunbirds frequented the bushes around the hide. These little characters added an exotic tone to the assortment of large and small birds we found while ‘hiding’. The Malachite Sunbird is found as high as 2,800m in hilly fynbos and aloe areas, and cool montane and coastal scrub. I have also seen Malachite Sunbirds at Qwantini at Sterkfontein dam and friends in Noordhoek in the Cape Pennisula have a pair nesting next to their patio. These Sunbirds are both nectar feeders and prey on insects. Being quite big it usually does not do the ‘hummingbird hovering’ trick but perches on an adjacent branch or stem.

I think these are one of the most extra-ordinarily beautiful Sunbirds. That iridescent green is simply exquisite. Having Zimbabwe roots, I am reminded of the exquisite green of the Sandawana Emeralds.  The female Malachite Sunbird is delicate but does not carry the magnificent plumage of the male.

In the lulls when there were no birds to photograph there were flowers – its called abundance. The Drakensberg Watsonia is a perennial which produces these gorgeous pink flowers.  It is normally found singly in the montane grasslands  in the Drakensberg and Maluti mountains.  I don’t know what the tall stem of blue flowers is.  Part of the beauty is just looking at the delicate colours and not trying to classify it with a name. Blue is an uncommon colour in birds and flowers in the wild.

We came across many Cape birds even though we were in KwaZulu Natal. The next image is of a Cape Canary. A pretty little seed-eater with the typical canary-type brimstone yellow but with grey tinges on the back of its head and neck and under the wings. This little see-eater was seen along the road about six or seven kilometres before the resort. It was in a small flock of five or six birds.

Yes, we found weavers around the castles but not at the hides – sounds a bit ‘Harry Potterish’!!. These yellow gems happened to be Cape Weavers and they were around the lodges at the Giant’s Castle Resort. This weaver builds a coarsely woven nest and does so in groups to form a loose colony. 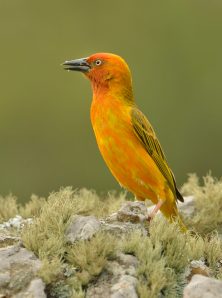 Another little gem, a real songbird was the Cape Robin-Chat. This Robin-chat is distinguished by its orange throat and grey breast. These are very melodious songsters who can always be heard at dawn and dusk.

If you were active around your room at the resort these little characters will come and join you. Presumably you disturb the insects and worms for them. They seem to have short flights preferring to rummage around in the underground much like Boubou Shrikes. 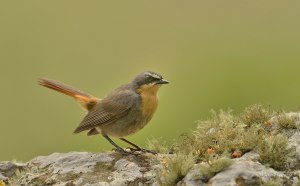 A popular guest at the lodge was this female Southern Boubou. The male has white on his throat and breast and has a glossier black back. The female has a white throat with a buff coloured breast and underparts. The best thing about these shrike-like birds is that they are wonderful songsters. They sing in duets and have a wide range of songs. These birds like to hop around in the bushes and underground and don’t often come out into the open. This makes photographing them a case of watching what they do for a few days before setting up to capture some images. These are common birds but tricky to get decent images of them.

Unlike the true shrikes, which perch conspicuously in the open, the Southern Boubou prefers to forage in dense vegetation close to the ground, a habit which has led to its being called shy and skulking. 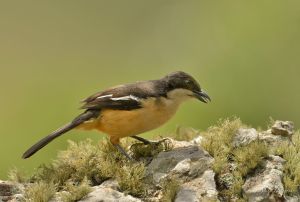 The ubiquitous Black-eyed Bulbul was ever-present. Another bird which is very vocal especially when alarmed. 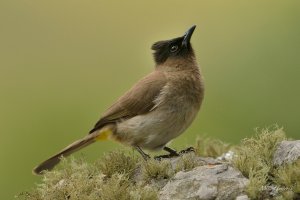 Yet another unusual bird found at Giant’s Castle was the Cape Rock Thrush. We saw them both at the resort and hide. The male has a slate grey head and rusty orange breast and the female has a brown head and orange breast. 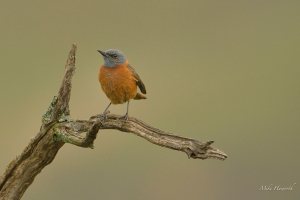 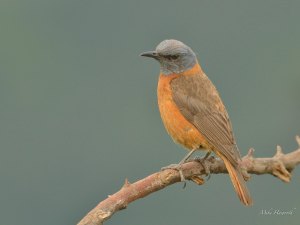 Many castles and some well-known towers (in yonder lands) have Ravens. Giant’s Castle is no exception. We did not see any crows but the White necked Ravens were evident around the resort and at the hide. These are not little gems but big and aggressive birds. They have voracious appetites and went for both the fat and meat on the bones near the hide. 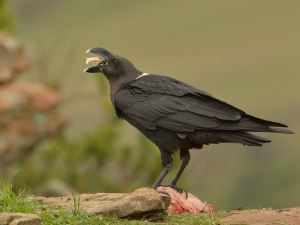 I hope you got a sense of the rich variety of birds you can see in Giant’s Castle. The scenery in this part of the world is spectacular and at this time of the year the mountainsides are a verdant green.

“A free bird leaps on the back of the wind
and floats downstream till the current ends
and dips his wing in the orange suns rays and dares to claim the sky.

The free bird thinks of another breeze
and the trade winds soft through the sighing trees
and the fat worms waiting on a dawn-bright lawn and he names the sky his own”.

I hope you enjoyed the little gems.

Seek to understand nature, marvel at its interconnectedness and then let it be.

One thought on “Little gems found in the Giant’s Castle”