We spent four days in the Kruger National Park in mid-June. I was very interested to see how the Kruger Park (or the Park or Kruger as it is known by South Africans) had recovered from the recent devastating drought after good summer rains.  The restorative power of nature has to be seen to be believed.

After a much delayed entrance to the Park  via the Phabeni gate we entered the Reserve. I have not been into the Kruger Park for three or four years and I was struck by two aspects. The queues, on two separate mornings, to get into the park first thing took not less than 45 minutes to get through a single manned gate despite two gates being available  and many park officials milling around. The second aspect was the quantum of traffic in the Park. In the last few years, the traffic in the Park has doubled, if not trebled. It was not school holidays or any public holiday. For wildlife photography this is not ideal.  Kruger has always been a relatively difficult place for wildlife photography because the backgrounds are generally “busy” but with the extra traffic it is now difficult to sit quietly waiting for a situation to develop because in no time there are cars all around wondering what you are looking at. After our long wait at the gate we had missed some of the golden light and the sun had begun to climb in the sky. Thankfully at this time of the year the temperatures are moderate. It is a cool 12 degrees centigrade first thing at sunrise but by midday the temperature had climbed to 30 degrees centigrade. In summer it is much warmer.

“Nature’s peace will flow into you as sunshine flows into trees. The winds will blow their own freshness into you, and the storms their energy, while cares will drop off like autumn leaves.”

The Kruger National Park is approximately 2 million hectares  in area, which makes it a similar size to Israel and about a third of the size of Ireland. The Park is roughly 360 kilometers long (north to south) and averages 65 kilometers in width, and 90 kilometers at its widest point. Being so big you have to plan  your day trip as the Park opens at 6h00 and closes at 17h30. With a maximum allowed vehicle speed of 50 kms per hour (mainly for the safety of the animals and birds) it is easy to misjudge your exit time, especially if you get caught up in a traffic jam around some lions or a herd of elephants hold you up..

Kruger Park is on the right hand side of South Africa so as a day visitor you drive into the sun in the morning and again into the sun when you are leaving (the Park) in the afternoon. On our first day, we decided to enter at the Phabeni gate travel down to Pretoriuskop camp in the south west part of the Park, and drive along Napi road toward the centre of the south end of the Park. We stopped at Shitlhave dam and Transport dam. We then took the Waterhole road to get back to Skukuza, the main camp in the centre of the south part of the Park. From there we travelled up to Leeupan which, traveling north, is about half way along the H1-2 to Satara camp. Leeupan was the limit of our day trip so from there we retraced our journey to Skukuza and went out through the Phabeni gate. That trip took us 11 hours of driving and stopping at the dams to watch and photograph the game.

In the past, Pretoriuskop camp has yielded some wonderful bird photography, but not this time. Between Pretoriuskop and Skukuza camps you will pass the Shitlhave and Transport dams, which usually attract a variety of wildlife. We stopped at Shitlhave dam and found a herd of waterbuck browsing along the water’s edge. 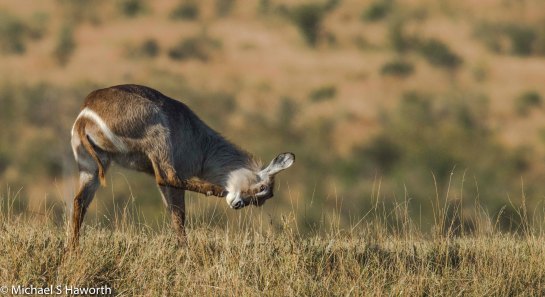 Part of the herd of waterbuck were grazing along the side of the dam.With the wind blowing lightly they were very wary as their senses (smell and hearing) get distorted in the wind. 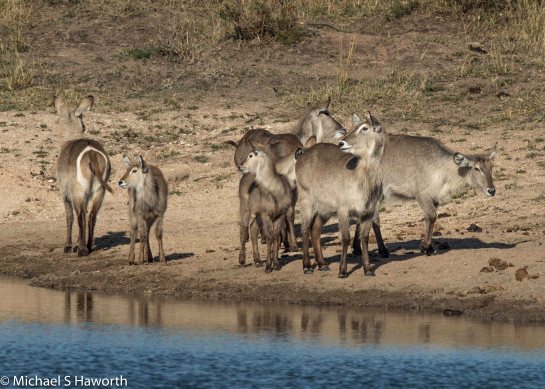 The females kept a wary eye on this crocodile warming itself in the winter sun. The croc would was never likely to catch a waterbuck on land especially when they could see it.

The innocence of youth. 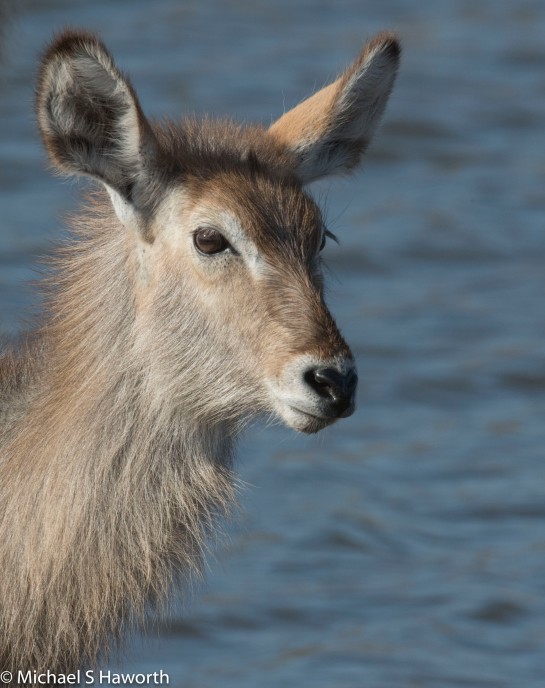 This young waterbuck was very inquisitive. 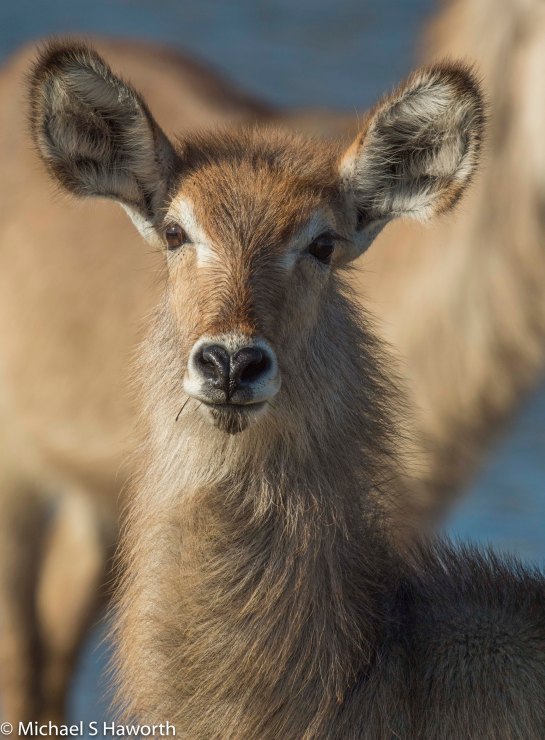 The dominant waterbuck bull might have ruled all the perimeter of the dam and intimidated the kudu and impala but had a tough time getting rid of an itch on his back.

This young waterbuck female’s face was quizzical and angelic.

As the morning progressed more and more wildlife came to the dam for a drink. A small family herd of kudu wandered down for a drink but they were very skittish. 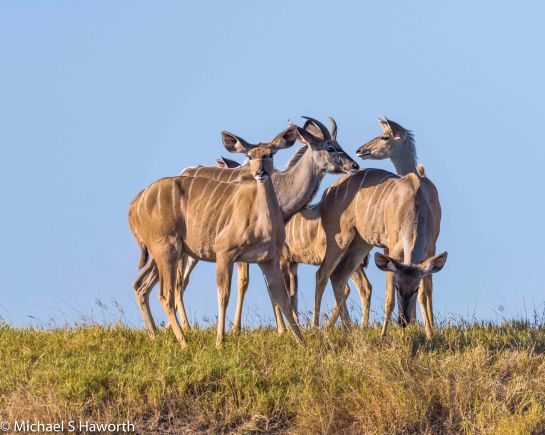 This young kudu bull must have been about a year old judging from his small horns. It usually takes about four years for a bull to grow the full two and a half twists to his horns. 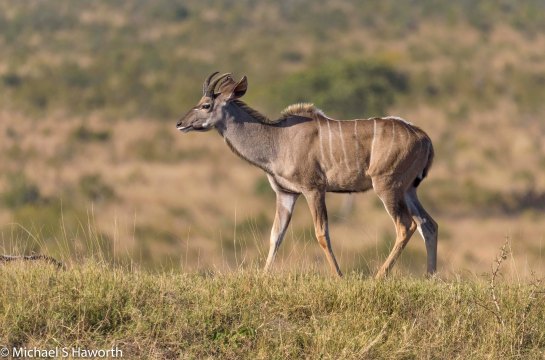 It was still the tail end of the impala rutting season so this male was snorting at the prospect of other males coming down to drink at the dam.

“In a cool solitude of trees
Where leaves and birds a music spin,
Mind that was weary is at ease,
New rhythms in the soul begin.”
~ William Kean Seymour

There is usually no causeway across a small sand river bed. Despite this I like to stop in the river bed to have a look up and down the river. Sometimes you find elephants or kudu browsing on the bushes along the river bank or, if you are lucky, a few lions lying in the shade on the cool sand. Either way I am always expecting to see something interesting. 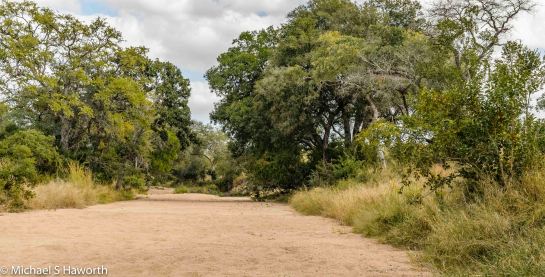 You will find the Impala lily in the drier parts of the bush. In winter, it’s striking colours are a stark contrast to the fading greens, fawns and yellows.

Across wide sand rivers there is usually a concrete causeway. This next image was taken from the middle of such a causeway. There were still pools of water at the edge of the river. Surprisingly it looked like it was going to rain, but it never did.

Hornbills are ubiquitous in Kruger. This is an African Grey Hornbill. It has a very different call to the red and yellow-billed hornbills. Its call  is described as thin, piping and plaintive.

You can tell this was a male Grey Hornbill as his bill was dark with a creamy section on his upper mandible and a prominent casque. The female has a smaller casque and her top mandible is mostly creamy white  and the lower mandible has a red tip to it.

We wandered through Skukuza hoping to find sunbirds on the aloes. Most of the aloes were gone and we did not find any sunbirds but we saw this Crowned Hornbill. It has a casque along most of its upper mandible and its bill and casque are red. 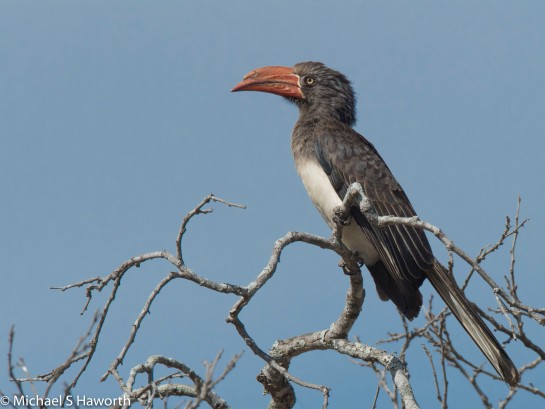 Although described as fairly common, I have rarely seen Crowned Hornbills in the park. You are more likely to hear its melancholic call coming from the thick woodland vegetation.

Up at Leeupan, the water had mostly evaporated. We saw some elephants and a pair of Saddle-billed Storks resting next to the pan. This male Saddle-billed Stork was resting, kneeling down with his legs bend in front of him. The impala ram was escorting a few red-billed oxpeckers.

The peace and quiet did not last long for this male Saddle-billed Stork. The matriarch moved him out of the way of her family and did not try to walk around him.

There were a lot of insects, especially grasshoppers. This made easy pickings for the birds and baboons alike. This male  baboon was just finishing off a succulent grasshopper.

An evocative image of the road down the hill towards the Phabeni gate in the late winter afternoon. 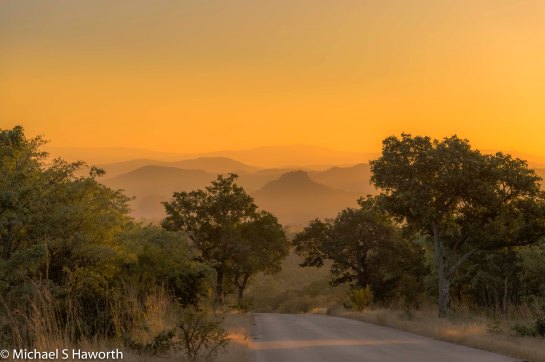 Kruger Park is an iconic game reserve with a rich history. For game viewers, it is a wonderful way to see the African bush and a variety of wildlife. For wildlife photographers it is all together more challenging. Being a day visitor makes it even more difficult to get good photographs. It makes a lot of sense to stay inside the park at one of the camps or lodges. The day visitor entrance process to the park is tedious but necessary given the high level of poaching in the park, not the least of which is rhinos.

“Miracles are not contrary to nature, but only to what we know about nature.”