This is the last post from our recent trip to Mashatu in mid-September. As on a game drive it is better to talk less and look more. I have chosen to follow that wisdom on this photographic game drive. The images I have included were  taken on our game drives and show the variety of wildlife you are likely to encounter.

A Brown-headed Kingfisher looking down at the Lions lying on the sand bank of the Majale river. 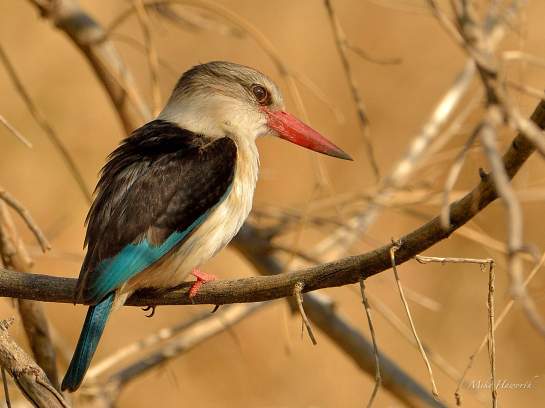 There are not many places you will regularly see Meyer’s Parrots – you will in Mashatu and you will often hear their distinctive screeches. 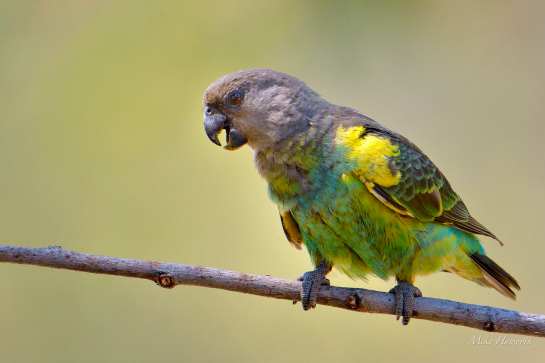 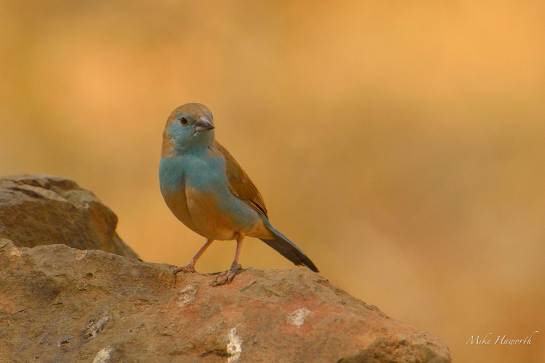 A Yellow-billed Hornbill was pecking at old Elephant dug looking for insects. It stopped to scratch its eyelid. It looked worse than it was – its eye was still intact.

A family herd of Elephant calmly walked passed us. 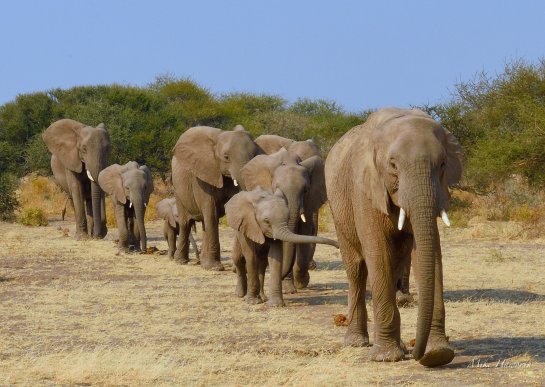 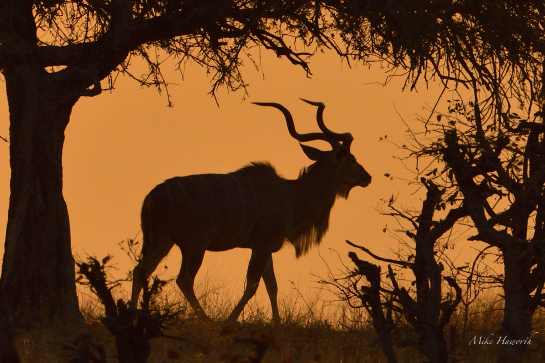 This young Eland bull’s dewlap was still under developed. The deep scratches on his neck look like he has already tangled with Lions.

This male was one of a coalition of two. He was hanging around because of the females on the other side of the river.

Lounging in the shade on the bough of a giant Mashatu tree.

Poking her head through a small fork in a Mashatu tree. This young Leopard looked wide awake after her day’s slumber.

Young Giraffe taking on a tree his own size.

A pair of Klipspringers crossed the Majale river in the late afternoon.

Feeling exposed this Klipspringer turns around and dashes for the rocks on the other side of the riverbed.

A male Cheetah, one of a coalition of three resting in the shade one hot afternoon. Everyone knows that a Cheetah’s claws, like a dog, do not retract. I never realised that a Cheetah has a flat tail which acts as a rudder. The flat tail is clearly visible in the next image.

This female Cheetah was watching her four remaining cubs cavorting around in the late afternoon light.

A year ago I posted an image of this Hyaena who looked badly mauled. He had his ears torn off and his left back foot had been bitten off. He looked in a bad way. Still on his own he has survived. It is remarkable that without any help his wounds healed. I have no idea what happened to push him out of the clan but his will to survive is irrepressible.

On our way back for breakfast we found this matriarch sitting in the remaining water of a shallow dam. 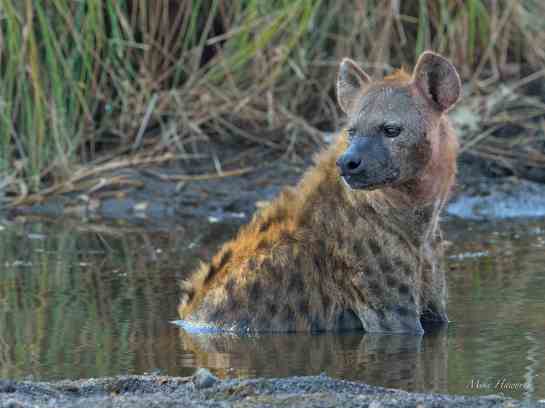 One of the matriarch’s pups was having fun playing in the water.

I was not sure whether this female was winching at her youngster suckling too hard or whether this was a clan greeting. 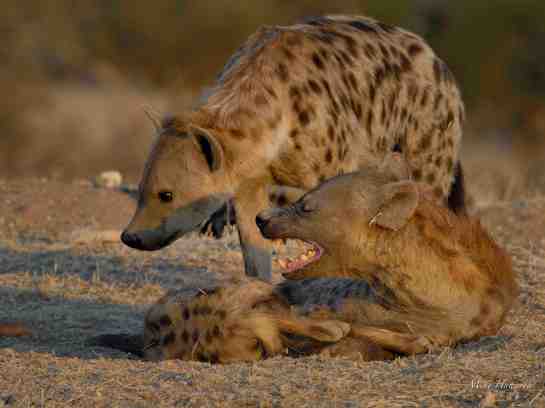 Male White-bellied Sunbird had come down to drink 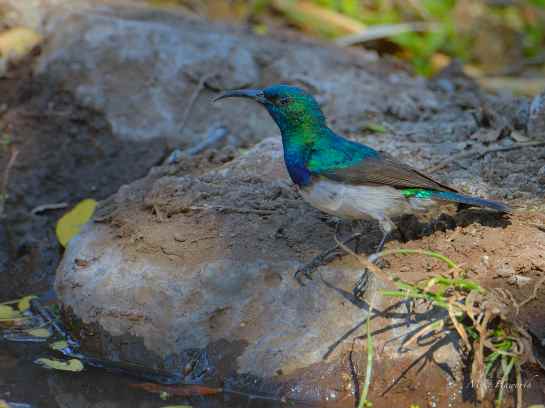 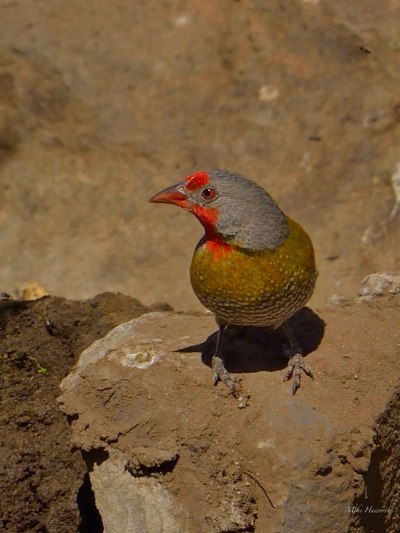 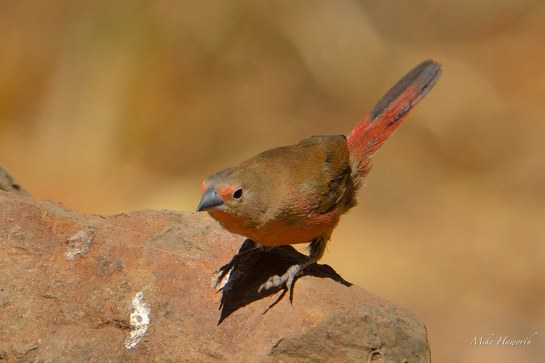 The Carmine Bee-eaters had not yet arrived but there were still gorgeous residents all around, like this Little Bee-eater.

Another beautiful resident, a White fronted Bee-eater on the river bed feeding on small white butterflies in the late afternoon. 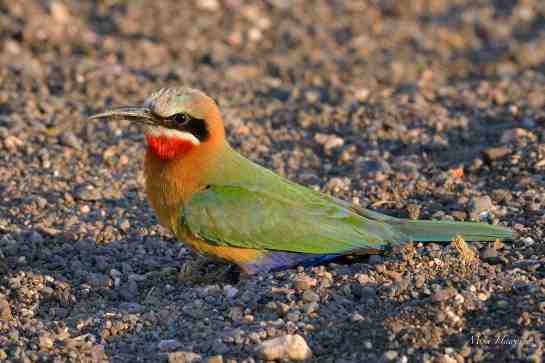 A Rock Monitor scouring the dry river bed for something to eat.

Male Baboon, back lit in the sinking afternoon light. 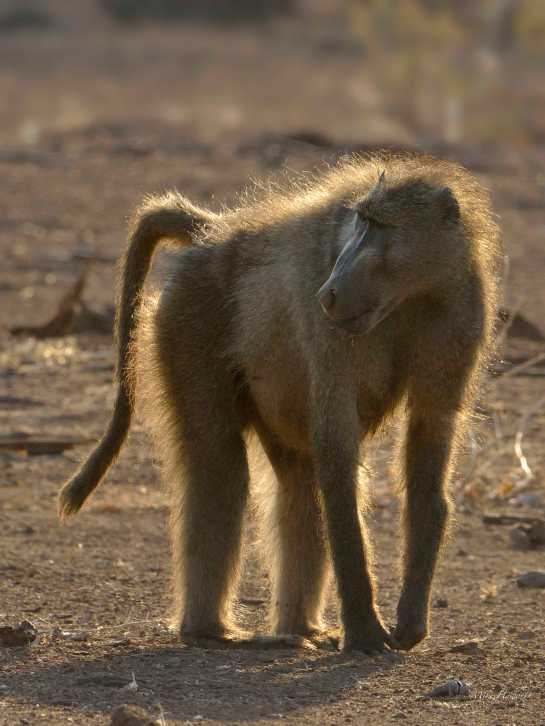 This mother was unfazed when a teenager tried to take her baby. She just held on more tightly.

This baby Baboon was allowed to play once the larger, rougher teenagers had wandered off.

A flock of Red-billed Queleas – a small murmuration!

A skittish Tree Squirrel comes down to drink.

There is a stretch of the Majale river which seems to be the hunting territory of a pair of African Hawk Eagles. These aggressive hunters would not let us get close.

This male Warthog was accompanied by a pair of Wattled Starlings who were catching all the insects that his lordship stirred up.

A Burchell’s Coucal foraging down near the Cheetah family.

Late in the afternoon, the time of long shadows, we found this Black-backed Jackal lying in the shade of  a Shepherd Tree.

This short BBC video, narrated by David Attenborough, captures the way I feel after having spent five wonderful days in Mashatu. Double click on the image to play the video.

Explore, seek to understand, marvel at its inter-connectedness and then let it be.

2 thoughts on “A Mashatu game drive”